The new series, "(Sub)mission," adds a twist of kink to the comedy show, said co-producer Rich Barney, a veteran local comic who recently appeared at SketchFest. Details about the new series can be found on their website, submissioncomedy.com.

In a telephone interview with the B.A.R., Barney said the new series will feature prominent local and national comics performing their "hardest-hitting material," as well as members of the local kink community sharing "tips and tricks" about their sex-positive lifestyle. Each show will feature six comics, including co-producers Barney and Natasha Vinik, and one person from the kink community. While the series is not being billed as an LGBT event, queer performers are prominent in the first three scheduled programs.

"I'm just a boring, cis, white man," said Barney, "and one of the few" on the program so far. Barney said the idea for the comedy-kink showcase came about when, after searching for a venue for the proposed series, he learned that the basement space at the Armory Club was available.

"I don't have a lot of experience with kink," said Barney, "but it seemed like it would be very cool to introduce the subject to others who are more vanilla, to let them know about some other things going on" in San Francisco. Comedians scheduled at each show will not necessarily perform material with sexual content, and kink performers will not necessarily perform comic material, although they may. 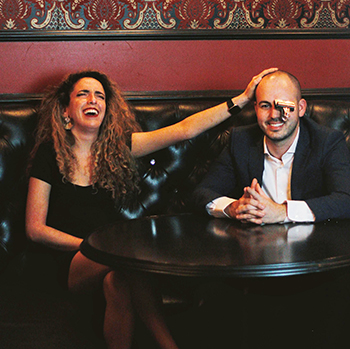 At the series launch on Feb. 1, Step Tranovich, founder of LoudandQueer.com and the online sex-toy shop cutelittlefuckers.com, will demonstrate rope bondage onstage, using one of the comics or an audience member as a prop. Tranovich, who identifies as gender queer and has produced many sex-positive events in the Bay Area, will demonstrate the tie "with enough details so that they'll be able to go home and do one," he said in a phone interview. More importantly, he said, the demonstration will expose patrons to "a side of San Francisco that they may not know exists."

Tranovich, an electrical engineer who has been active in San Francisco's kink community since the day he arrived here from Washington, D.C. four years ago, is enthusiastic about the idea of combining "alternative sex" and comedy. When asked, Tranovich defined alternative sex as "anything other than cis people in a mission position."

Tranovich has observed sex-positive clubs featuring comedy (as many bars do to bring people in the door) that "won't really have any material related to sex. It's like it's almost too uncomfortable to discuss," he said. "This is the perfect opportunity to bring a fun and light-hearted approach [to kink] by mixing it with a night of comedy. I think it's going to work very well."

During his time in San Francisco, Tranovich found that the "sex-positive culture here is open and accessible," very unlike Washington D.C. From his first day in San Francisco, "I realized I could just show up and be involved in a community. That's one of the things I really love and value about living here."

Tickets for "(Sub)mission" are $11.75, (50% off for BAR readers with discount code 'LGBT'), available at https://submissioncomedy.eventbrite.com. Doors open at 6:30 p.m. 90-minute show begins promptly at 7 p.m. Cocktails and wine are available.