Bring on the holiday entertainments! 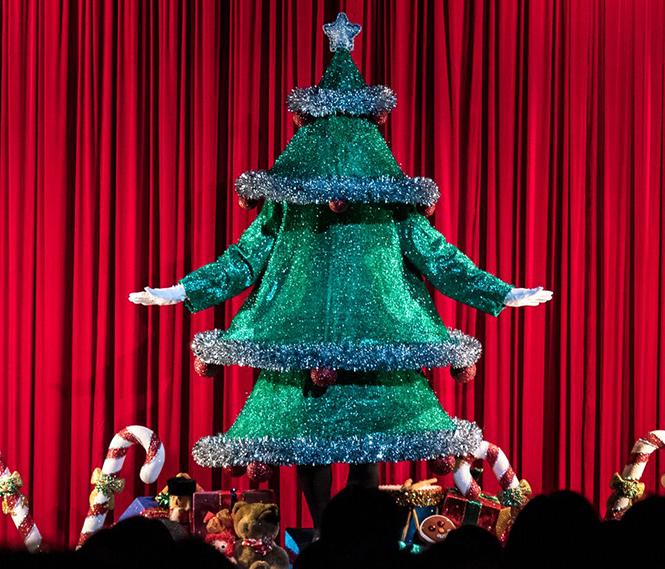 We've turned the corner into the holiday season, so last week Out There attended shows perfect for this time of year. On Saturday night we made a long overdue visit to Beach Blanket Babylon's holiday edition, and earlier in the week, we were in the house for opening night of San Francisco Playhouse's "Mary Poppins."

Surely you know the BBB story by now. Snow White (sometimes called Snow Tires) searches the world for her Prince Charming, hot dudes available to young ladies being in short supply in San Francisco. Pop culture is sent up courtesy of musical riffs, outrageous caricatures, extravagant costumes and sky-high hats. As always, there are up-to-the-moment topical references galore, from Keebler elf Jeff Sessions still smarting from his ignominious end, to Vladimir Putin ("on the Ritz"), Kim Jong Un and other global villains. The Trump Crime Family gets a number, too, a la the Von Trapps; the Criminal-in-Chief remembers golden showers, while Melania reprises her famous Marie Antoinette line, "I really don't care, do you?"

There's Kanye, there's Kim, there's tired old Caitlyn Jenner, but the most current event of all is the holiday season, and the end-of-year BBB offers plenty of Xmas cheer, including Xmas King Louis, Mr. Peanut Santa, and a chorus line of Tap-Dancing Xmas Trees. The gigantic Yuletide Hat is a winter wonderland, complete with chugging toy train. The SF skyline hat now boasts a Salesforce tower, but it's still the Transamerica pyramid that gets a rise out of all the excitement. 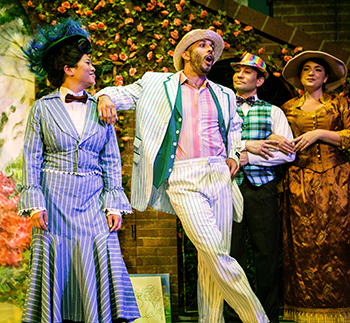 It's been a while since OT visited BBB, and we're happy to report the Old Girl still has it in her to amuse, delight and surprise, much like SF itself. Treat out-of-towners, family and loved ones for fail-safe holiday fun. "Steve Silver's Beach Blanket Babylon Holiday Extravaganza" holds the Club Fugazi stage through Dec. 31. Tickets ($30-$155): www.beachblanketbabylon.com, (415) 421-4222, or at the box office, 678 Beach Blanket Babylon Blvd., formerly Green St., SF.

SF Playhouse's "Mary Poppins" is a musical based both on the stories of openly bisexual author P.L. Travers and on the Walt Disney film she resisted and reviled. As artistic director Bill English points out in his program note, "The original Mary, like Ms. Travers, an immigrant from Australia, was from the underclass of London deplorables," not posh like Julie Andrews' version. The musical offers an intriguing and quite un-Disneylike critique of the English class structure. The heroes are lower-class sorceress Mary and the dirt-under-his-fingernails, working-class chimney sweep Bert. Upper-class banker Mr. Banks and out-of-touch Mrs. Banks need more than a spoonful of sugar to catch a clue on child-raising.

The show, with its typically-for-Playhouse elaborate set design and high production values, never fails to delight. Bay Area stage veteran El Beh makes for a formidable Mary, Wiley Naman Strasser is a spry and appealing Bert, and the entire cast, including two very game child actors, fill their characters with life and song. Special note must be made of trouper Katrina Lauren McGraw, who makes a meal out of two quite dissimilar parts: the nasty nanny Miss Andrew, always ready to inflict poisonous "Brimstone and Treacle" on misbehaving children; and the rumpled bag-lady Bird Woman, offering her cruddy parcels of crumbs for "tuppence a bag." Exclaim the Banks children, "Oh, there's that horrible woman Daddy warned us about!" But she, too, becomes a lower-class hero in this passion play.

So a most populist Mary Poppins and all sorts of fantastical San Francisco Beach Blanket characters await you this holiday season. Take the plunge and book some tickets! sfplayhouse.org