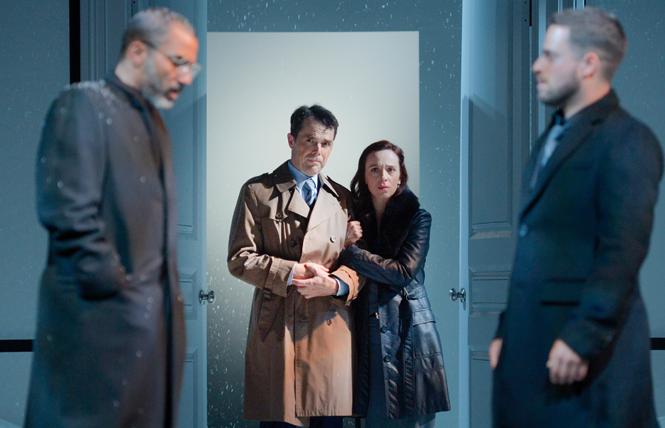 In September 1993, an optimistic blueprint for peace between Israel and the Palestine Liberation Organization, the Oslo Accord, was signed. With great international fanfare and attention, Israeli Prime Minister Yitzhak Rabin, PLO Chairman Yasser Arafat and US President Bill Clinton gathered in Washington, D.C. for the ceremony.

Those three figures loomed large in news coverage of the time, and they do so in a video projection that ever-so-briefly overtakes the set toward the end of the engrossing Marin Theatre Company production of "Oslo," running through Oct. 21. Briefly, because playwright J.T. Rogers is far less interested in heads of state than in the hearts and minds of the people behind them.

All the world's a stage, and "Oslo" is dedicated to backstage drama. Its characters are the unsung career diplomats and political scientists of an international "deep state" (thank goodness for it) who steadfastly steer society forward in minute increments while most of us remain distracted by the superficial ceremonies and scandals projected on our screens.

The play artistically extrapolates from real people and incidents, centering on the Norwegian couple who, in the year leading up to the accord, secretly broker back-channel negotiations between Israel and the P.L.O. Terje Rod-Larsen (Mark Anderson Phillips), who helps run a political think-tank, and his wife, Mona Juul (Erica Sullivan), who works for Norway's foreign ministry, orchestrate and host a series of clandestine meetings at a lodge outside the title city.

While the Israeli and P.L.O. attendees are preconditioned to approach each other as foes, Terje and Mona shrewdly leverage one of their unrecognized common enemies: formal protocol. Rather than gathering large government contingents for strict procedural meetings and all-or-nothing decisions, the pair choreograph intimate colloquies of four to six officials. The participants are given the opportunity to interact outside the circumscribed boundaries of international negotiation. As long sessions of eating, drinking, and laughter alternate with periods of nuts-and-bolts negotiation, members of the opposing parties connect with each other personally as well as politically. Seeds of growth are sown, and, like ivy, agreements cultivated at lower levels gradually climb each government's chain of command.

Rogers strikes a fine balance between detailed discussions of deal-terms and humanizing banter among the negotiators. Audience members needn't have much grounding in Middle East politics to follow along, but there are plenty of specifics touched upon for those who do. It's in demonstrating the slowly accreting impact of those personal relationships that the playwright occasionally oversimplifies. There's a scene in which the most arrogant Israeli diplomat, Uri Savir (a terrific chest-puffing Paris Hunter Paul), and PLO Finance Minister Ahmed Qurie (J. Paul Nicholas, beautifully conveying both businesslike mantle and underlying sweetness) realize that they each have a daughter named Maya, and share a moment of goopy communion.

It's a rare moment of blatancy in a production that generally hums along with elegant nuance. Director Jasson Minadakis keeps things moving at a lively clip while coaxing delicate shifts in tone from his cast of 14 over the length of the play, which covers a nine-month period. Precisely etched characters who are hostile to one another at the start form completely believable alliances by the end. There are no fundamental changes in their personalities, only their perspectives. To convey that so clearly is a triumph of direction and performance, and reason in itself to see this production.

Throughout the evening, Terje and Mona serve as facilitators for the audience as well as for the diplomats. The practical, altruistic leanings of their real-life counterparts are reflected in the mechanics of the play. Stepping toward the apron of the stage, they provide brief segments of narration to help viewers keep track of chronology. When the lights go down between scenes, they help rearrange the stage furniture. On the world stage, they've quietly helped rearrange things as well.

In the end, neither facilitators nor policy-crafters take part in the pomp and circumstance of the signing ceremony featured in headlines and on the evening news. That the Oslo Accord was authorized in Washington, D.C., overseen by Bill Clinton, suggests that the hardworking diplomats — and Norway itself — were regarded as little more than furniture-movers, setting the scene for the stars.

Today, with arrogance and idolatry center stage in American politics, "Oslo" reminds us that, backstage, there is a world of earnest, ongoing effort. It gives a glimmer of hope that some good may yet come of unheralded work and positive intention.

Needless to say, the peace promised by the Oslo Accord never came to the Middle East. And all the thoughtful diplomacy in the world can be erased with the push of a button. "Oslo" gives the world's furniture-movers a beautiful, well-deserved moment in the spotlight. But one is still left to wonder if the furniture is those proverbial deck chairs.