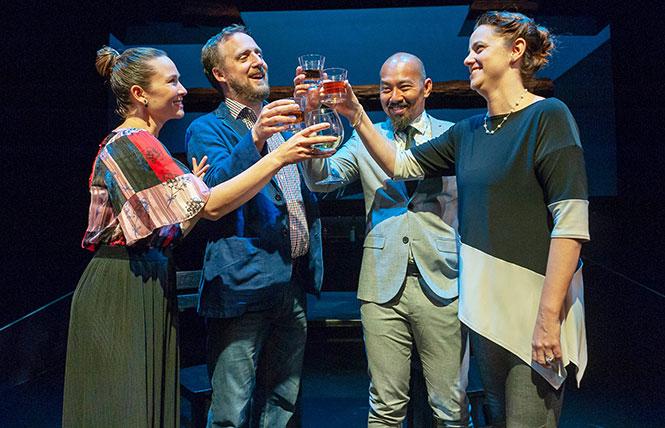 Do you enjoy puzzles? If you answered "Yes," please continue to the next question; you may be a likely admirer of Christopher Chen's "You Mean To Do Me Harm" now playing at the San Francisco Playhouse.

Do you still enjoy puzzles when you can't solve them? If you answered "Yes" — as playful, provocative Chen surely would — by all means make your way to this tricky Rubik's Cube of a comic drama. In 90 brainteasing minutes, a prickly initial dinner conversation between two well-to-do straight couples is twisted, turned and imaginatively reconfigured, but never resolved.

That the pairs — Samantha and Ben, and Lindsey and Daniel — each consist of a Chinese-American spouse and a white one adds potent emotional stakes to the proceedings. Conscious and subconscious racial preconceptions are perpetually in motion as Chen moves his initial quartet into a series of two-character dialogues.

As in manipulating a Rubik's Cube, much of the beauty that emerges here is in pattern recognition. How do interpersonal dynamics shift when white characters are speaking without the Chinese present? When wives are alone without husbands (one of each is white)? When one couple is speaking about another couple? And vice versa, and vice versa, and crisscross and back again?

While Chen's maneuvers are elaborate, his dramatic architecture remains sharply drawn and structurally sound. He forces the audience to consider the power of unspoken cultural assumptions, whether they are accurate or not. His characters repeatedly refer to "secret channels" of nonverbal narrative that play in their minds, even as their actions may contradict them. The most powerful message of "You Mean To Do Me Harm" is that even when we are at our most painstakingly self-aware, we may still lack self control. In which case the harm in question may prove to be self-harm.

While he writes intimate conversation deftly, Chen takes a distracting early stumble by having his characters argue about global politics. Suggesting that current diplomatic conflicts between the U.S. and Chinese governments — profiteering, censorship and human rights are all invoked — somehow trickle down and create an irresistible undertow within these couples' marriages is a serious overreach, especially since the Asian-American stereotypes wrestled with in the play are in no way Sino-specific. Fortunately, this thread is quickly dropped.

Like Chen, director Bill English offers some showy flourishes, but with less consistent success. Having each scene's non-speaking characters remain onstage as shadowy eavesdroppers on the others' conversations proves an elegant evocation of Chen's alternate channels and subconscious narratives.

But the impressive talents of sound and projection designer Theodore J.H. Hulske are egregiously misused here: the visual and sonic eruptions of static that literalize this channel-switching force a poetic notion into science-fiction silliness. Similarly, scenic designer Angrette McCloskey has come up with a slick, elaborate set that distracts from the heart of Chen's work.

But the skilled cast of four handles Chen's script well despite the superfluous trappings, subtly conveying the shifts in tone and perspective that the stagecraft alternatively delivers with a sledgehammer. In "You Mean to Do Me Harm," Christopher Chen asks audiences to commit their attention to an elegant, unsolvable puzzle. His script is reason enough to see a production that leans too hard on shiny toys.