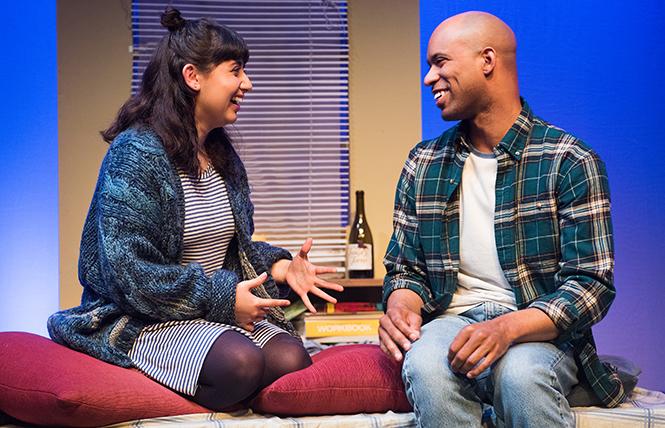 Best friends since childhood, Charlotte (Linda Maria Girón) and Jonny (Kenny Scott) tell each other everything, in The Mystery of Love and Sex at NCTC. Photo: Lois Tema

"Don't you want to be comfortable?" Jonny asks his lifelong friend Charlotte in The Mystery of Love and Sex, a thrilling psychological dramedy playing at NCTC through May 20.

"I want to be so much more than that?" is Charlotte's reply.

It's one of many acutely awkward moments in playwright Bathsheba Doran's tight, suspenseful snare drum of a script. In the two fleet hours of director Rebecca Longworth's beautifully realized production, race, sexuality, spirituality and the bonds of friendship and family vibrate against each other to sometimes excruciating but ultimately comforting effect.

The older pair is justifiably concerned at the evolution of the younger's relationship given the students' lack of life experience and apparent impulse to stick with the familiar. But Howard also seems to harbor unjustifiable discomfort with their ethnic and religious differences. And while Lucinda comes across as the more open-minded parent here, there's a single disarming moment to come in which she lashes out with crude racial invective.

Whether Howard, an author of detective fiction, or Lucinda is actually racist - and whether such a label can ever be conclusively used - is just one of the mysteries explored by the play. What's inarguable is that they are loving: of Charlotte, Jonny, and despite a sometimes tumultuous marriage, each other.

The love between Charlotte and Jonny is also put to the test over the play's five-year span as she gradually moves into problematic relationships with women and alcohol. Meanwhile, he awkwardly dates a number of women, agonizing about remaining a virgin until marriage while harboring a vast store of anger and a pair of ultimately explosive secrets.

Doran deftly keeps those revelations under wraps without resorting to any red herrings. Instead, she provides a compelling story with Charlotte at its center until, during the second act, Jonny's self-created distractions are stripped away. Howard and Lucinda also continue to grow more nuanced until the very last scene. The mysteries here are never of the mechanical detective-fiction variety; while just as nerve-wracking, they prove more profound and strangely satisfying in their insolvability.

All four actors deliver strong, shaded performances here. Given the constrained pool of Bay Area actors, director Longworth succeeds in casting and modulating such a well-matched quartet. One of the frequent flaws in local productions is an unevenness within casts that can inadvertently focus audiences on talent level and acting technique rather than allowing them to become smoothly immersed in the story being staged. The cast here collaborates almost flawlessly, letting the viewer concentrate on characters rather than actors.

The spare, modular set by Ting Na Wang appropriately evokes several environments while allowing quick changes and leaving all of the play's telling details to emerge from the actors' performances and Doran's dialogue.

Ultimately, Doran's script is the breakout star here. While all too many plays about domestic relationships end up tinged with sitcom silliness or telemovie melodrama, Doran, who has written for HBO's Masters of Sex and Boardwalk Empire, has managed to compress, into a single evening of theater, the complexity of character that can evolve over a season's worth of first-rate serial television. The Mystery of Love and Sex delivers a binge's worth of reward for a one-night commitment.