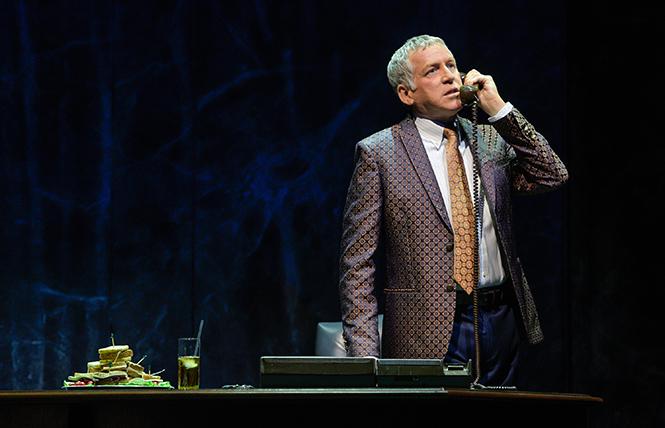 After much soul-searching, I decided against Berkeley Rep's $14 box lunch and went with an Alpine burger and garlic fries from Barney's Burgers, ordered online and consumed on the terrace in the fresh air. My date paid. She'd always wanted to binge-watch the sprawling, genre-bending, AIDS-related saga "Angels in America" in a single day, for which adventure sufficient rations are key. We worked up an appetite during the first half (three-and-a-half hours, including two 15-minute intermissions), and ate ravenously before schlepping ourselves back inside the Rota for the second half (three hours and 45 minutes). You can double dip or consume either part separately, at Berkeley Rep through July 22.

"Angels" was born in San Francisco. Berkeley Rep artistic director Tony Taccone, who directs, was artistic director at San Francisco's Eureka Theatre in 1989 when he commissioned Tony Kushner to write the legendarily tumescent megatext. The Eureka staged the world premiere of Part One, "Millennium Approaches," in 1991. Part Two, "Perestroika," was added for the world premiere of the whole enchilada in 1992 at the Mark Taper Forum in Los Angeles and London's National Theatre, before this quintessentially New York story was unleashed on Broadway in 1993. A lesbian friend active in ACT UP paid for my ticket. I was stunned by the sheer verbiage.

Politics rarely make it to Broadway, but channeling the angst of his gay generation, Kushner takes on Ronald Reagan, who became president the year AIDS got its name. As a father figure for all Americans, the ex-president of the Hollywood Screen Actors Guild notorious for "Bedtime for Bonzo" (1951), and ex-governor of California (1967-75) infamous for his indifference to redwoods, was a Rushmore-sized target. I was thrilled, awed, and bewildered to hear political discourse cutting through the usual shtick. Can you do that for eight hours and make em like it? Yes, if you've the chutzpah to transgress societal and theatrical norms, transcend self-pity, and transform a plague into a metaphysical picnic.

You do not go to Kushner for streamlined structure, narrow focus, or dramatic necessity. You go for talk, fabulousness, jokes, cosmology, schmaltz, Jewishness, and an inclination to weave the Past into the Present while staring down an implacable Future. You go for gay guys screwing up their domestic arrangements, self-obsessing like Woody Allen, hallucinating like Chagall, and breast-beating like Clifford Odets. Broadway's voice of Jewish idealism in the 1930s, Odets championed the family, the working class, unions, and artists. Never mentioned, Odets nevertheless haunts "Angels." This golden boy of leftist theater named names to the House Committee on Un-American Activities in 1952, ruining his street cred but boosting his Hollywood career.

Which brings us to Roy Cohn, Kushner's "Pole Star of human evil," a closeted Jewish mama's boy who, after prosecuting the Rosenbergs for the Justice Department, became chief counsel to Senator Joe McCarthy in 1953. Their anti-Communist shenanigans were matched by their anti-gay terror campaign. That gay scapegoating is a marker for homosexual panic - the simple premise forming the steely moral core of Kushner's fluffy fantasia - might shock those who don't know their Freud. Cohn's as relevant today as ever: he had a crush on Donald Trump while acting as his go-between with mobsters running construction in NYC, before dying of AIDS in 1986.

"Angels" begins in 1985. Joe (Danny Binstock), a young Mormon lawyer married to unloved Valium-popping Harper (Bethany Jillard), is being groomed by Cohn (spiffy Stephen Spinella) for a Washington, D.C. job to spy on Cohn's enemies in the Justice Dept. Joe becomes the love object of Louis (quirky Benjamin Ismail), a Jewish intellectual office drudge who's freaked out by the AIDS-related diseases of his lover Prior (perky Randy Harrison), a White Anglo-Saxon Protestant who connects with an Angel (fiery Francesca Faridany), an ecstatic hermaphrodite who denounces "the virus of Time" that lets humans alter the world's course.

Spinella gives the most compelling performance, his Cohn being abruptly nice, nasty, or pathetic as the mood strikes him, and his death scene is a high point. The three young male leads form a sexual triangle triggered by Louis' abandonment of his lover. Ismail, as Kushner's doppelganger Louis, handles his over-intellectualized outbursts with grace. Harrison, as the sympathetic AIDS sufferer Prior, believably does impossible things like talk to angels. Binstock as Joe, the married Mormon gay Republican butt-boy, is convincing as a man who does not know who he is or what he wants. Caldwell Tidicue, as Cohn's black male nurse Belize, reality checks the delusional white people with authentic warmth and attitude.

Three women lend support in multiple roles. Carmen Roman opens the show as an ancient rabbi. Then, as a Mormon mom, she adapts to Joe's newfound ho-mo-sex-u-a-li-tee. She sings beautifully as Ethel Rosenberg, a worthy nemesis to that "son of a bitch" Cohn. Francesca Faridany registers as a crazy homeless hag and a gung-ho real-estate agent in silly, curly wig. Her Angel wasn't entirely cohesive opening night due to a glitch with the flying harness, but they'll fix that. In the thankless role of Harper, the woman no one wants, Jillard is overwrought, never attaining the Valium-induced loopiness that links her to the hallucinating Prior.

Artistic director Tony Taccone might be too familiar with this old play to do it justice. "Angels" is an iconic gay classic, a period piece that deserves to be fluffed by a new queer vision. Taccone's staging is static, even though scenes jump from office desk to living room couch, to hospital bed, to park bench, to the Mormon Visitors Center, to Antarctica, to Salt Lake, to Moscow, and all the way to Heaven. Platforms glide in and out while sliding vertical panels catch projections of scenery and weather effects: rain, snow flurries, and lightning. This mechanical activity, however, is no substitute for creative impulse. Once the cast settles into the run of this three-ring circus, things will no doubt sort themselves out. God willing. Go see.