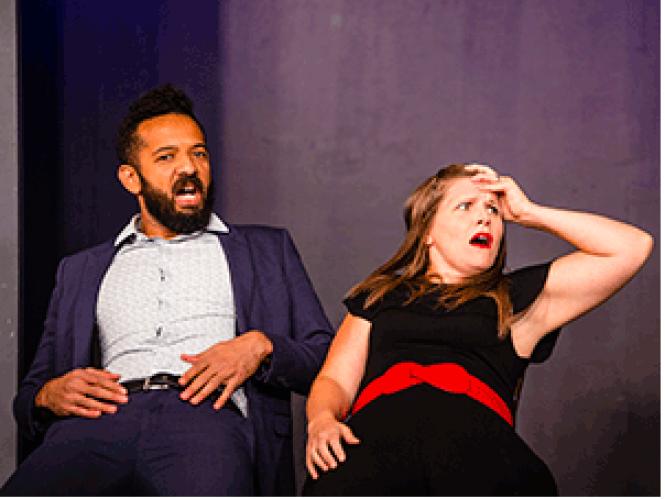 The Puritans didn't approve of its celebration, and for part of the 17th century, Christmas was banned in Boston as a public nuisance. Too much revelry. But the urge to have fun at this time of the year began long before anyone attached a significant birthday to it. We seem pretty much hardwired to drink from the cup of cheer at this time of the year. One of the places you can dip your cup is the theatrical punchbowl where ingredients are spiced and spiked to most any taste.

The definition of a holiday show has been stretched wide beyond "A Christmas Carol," and around these parts, it can mean transgressive variations on Yuletide merriments and shows with no specific holiday connections beyond stories that may or may not be suitable for families but can feed seasonal urges. Here unwrapped are some productions that can help with those longings.

The touring arm of Chicago's legendary Second City is at Berkeley Rep with its "Dysfunctional Holiday Revue." It's billed as a chance to see "the stars of tomorrow," and just a few of the comedy greats who have passed through the ranks since 1959 include John Belushi, Steve Carell, Tina Fey, Stephen Colbert, and Gilda Radner. The collection of holiday-slanted improvised and scripted sketches runs through Dec. 31. Tickets at berkeleyrep.org.

"Killing My Lobster," San Francisco's own long-running sketch-comedy troupe, has taken up residence at PianoFight for the holidays. "KLM Presents: A Bag of Dickens," running through Dec. 16, is the work of six performers and seven writers who deconstruct various traditions of the season. Tickets at pianofight.com.

What would the holidays be in San Francisco without another go-round of "The Golden Girls Live: The Christmas Episodes" at the Victoria Theatre? This reenactment of stories culled from the NBC series, presented by local drag luminaries, has become more popular each year. Tickets are scarce to see Heklina, D'Arcy Drollinger, Matthew Martin, and Holotta Tymes through Dec. 23, but you can try your luck at goldengirlssf.com.

With Oasis hosts Heklina and Drollinger jingling their bells at the Victoria, the Drunk Drag Broadway players will be offering their new deal for Christmas at Oasis. "MAnnie," running through Dec. 10, is described as the story of a little redheaded "whorphan," her gender-bending gal pals, billionaire sugar daddies, plus characters who wander in from other Broadway musicals. The singing is live, in case you were wondering. Tickets at sfoasis.com.


Not Necessarily the Yule

It may have a character named Christmas Eve, but "Avenue Q" has nothing to do with any holiday. Even so, it has become a popular tradition at New Conservatory Theatre Center, where the people-and-puppets musical is back for its fifth annual production, timed to the festive season and running through Jan. 7. Two alternating casts have let the theater schedule more performances per week for what has become a box office champion. Tickets at nctcsf.org.

If there be Scotch pines amid the botanicals in "The Secret Garden," you won't find one with tinsel and garlands inside the bleak mansion on the Yorkshire moors. But with its child-centric story of lives rekindled, the 1991 Broadway musical is 42nd Street Moon's choice for the season, running through Dec. 24 at the Gateway Theatre. Based on Frances Hodgson Burnett's 1911 novel, the musical tells the tale of orphaned Mary Lennox, who is sent to live with her misanthropic uncle in a house of secrets and unhappiness that she helps resolve. Tickets at 42ndstmoon.org.

Five actors quick-change their ways through more than 30 roles and a dozen countries in Mark Brown's adaptation of "Around the World in 80 Days." Instead of going big, as some previous stage adaptations have attempted, this 2008 version has fun with the smaller-is-better approach to Jules Verne's novel. It's the holiday offering for TheatreWorks, running through Dec. 31 at the Lucie Stern Theatre in Palo Alto. Tickets at theatreworks.org.

Two only-in-SF traditions are back for 2017. Connie Champagne began channeling Frances Gumm for the holidays more than 25 years ago, and after sitting out 2016, she's back with "The Judy Garland Christmas Show" on Dec. 15 at Oasis.

It's the 25th year for "Kung Pao Kosher Comedy," born of the Jewish tradition to head to a Chinese restaurant on Christmas. Cathy Ladman, Wendy Liebman, and Gary Gulman are the headliners, with founder Lisa Geduldig as the emcee at the New Asia Restaurant. There are dinner and cocktail shows on Dec. 23-25. Tickets at koshercomedy.com.

It's not Santa red that a cast member is sporting at a rehearsal of a holiday show, but the first sign that a zombie apocalypse is engulfing San Francisco. DIVA or Die Burlesque is presenting "Just Another Zombie Holiday Show" at Exit Theatre through Dec. 16, with eight local burlesque acts trying to put on a show despite expanding necrotic circumstances. Tickets at theexit.org.