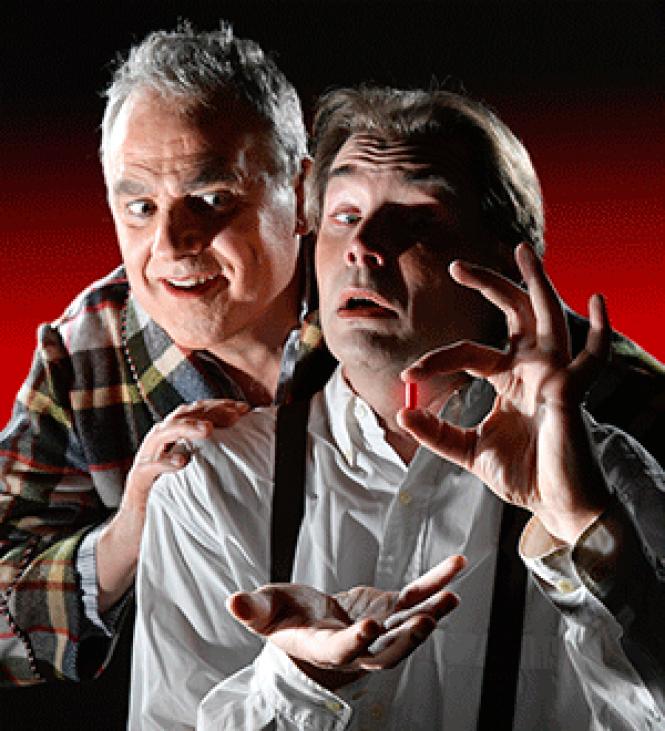 There is but a single spurt of blood, and as for sex, it is pretty much absent as well in the first act of the latest Shocktoberfest production at the Hypnodrome. That's not how Thrillpeddlers usually rolls, and you may find yourself at intermission wondering if the troupe has tempered its gore-and-fleshpot ethos. But not to worry. Just stick around for the second act.

Subtitled Pyramid of Freaks, this is Thrillpeddlers' 17th annual tribute to Grand Guignol traditions and its tributaries. Even with the relatively demure first act, this production follows the usual Shocktoberfest pattern of reviving a Grand Guignol classic from a century ago, offering a couple of new or adapted pieces, and presenting a musical phantasmagoria.

In the first act, with shock temperatures mainly at a simmer, several performances and clever staging help provide the heat. The Haunted House is Marc Bonis-Charancle's rather basic 1903 tale about a house thought to be, yes, haunted, as a group of partying toffs breaks into the presumably abandoned old mansion and the menfolk try to scare the fluttering women (with Zelda Koznofski and Eric Johnson standouts among the flutterers and the men who love them). The banter ends with the arrival of the much-perturbed homeowner, a blistering force in James Jeske's performance, as he lambastes the intruders. They in turn wonder why his occupancy of the house has been so shrouded, and if the revelation isn't particularly shocking, Jeske motors the play forward to its bloody end.

Russell Blackwood directed The Haunted House, and he gets more opportunity to create interesting moments in The Hellgrammite Method. With accompaniment by Vagabondage, the show's house band, Blackwood imaginatively introduces us to a raging alcoholic who downs shot after shot in choreographed patterns at the start of the play. Dan Foley plays the dipsomaniac in this period piece, and Foley has the look of a wide-eyed actor in the early talkies. A newcomer, I believe, to the Thrillpeddlers company, Foley projects a clownish desperation and more serious anguish that well serve the piece.

The story began as an episode from the 1980s reboot of The Twilight Zone, and original screenwriter William Selby has adapted his script for the Thrillpeddlers production. The Twilight Zone-style twist is actually introduced fairly early in the story, as the drunkard seeks help for his addiction from a doctor (smartly played by CJ Smith) with an unconventional treatment involving a stomach parasite that has its own taste for hooch. It's a dark tale that turns out sunnily for all.

Then comes a turn into the mighty weird as the second act opens with Demon Train to Sodom, a world premiere musical by Scrumbly Koldewyn that barrels along a convoluted track veering from farmhand sodomy, human compost, fire-and-brimstone sermons, bestial bacchanals, and a relatively happy ending as, ahem, heterosexuality is restored to the homestead. Earl Alfred Paus plays a stranger lured to a family farm where a potion turns him into a cum dump for the farmer before a preacher/demon (in a splashy and well-sung turn by John Flaw) leads him to a purgatory of carnal debauchery. Paus doesn't have much of a singing voice, but he makes up for it with his zany dance moves as a possessed soul. More good work from Jeske as the fornicating farmer, and from Crystal Why and Alix Feinsod as his jealous wife and libidinous daughter.

Director Noah Hayden manages to keep the careening Demon Train on track, and he also provides a steadying hand on the bloodbath finale. Rob Keefe's Pyramid of Freaks is set amidst a group of circus sideshow performers who mainly kvetch before â€" in Tod Browning style â€" turning against the "normals" who have long disrespected them. The catalyst is a strongman who tells his audiences that strength comes from the heart, and he means that quite literally. David Bicha has feral intensity as the heavy lifter, who salivates over the sight of muscular roustabouts before snatching hearts from their chests and devouring them. Additional good work from Foley as a police detective, Johnson as the pensive Alligator Boy, Smith as the grouchy circus owner, and Koznofski as the strongman's assistant who also breeds puppies â€" in her womb.

After all that, the lights-out spook-show finale feels a bit tame. It's an affectionately held tradition at Shocktoberfest, but the muted reaction on opening night suggests that maybe it's time for a makeover.