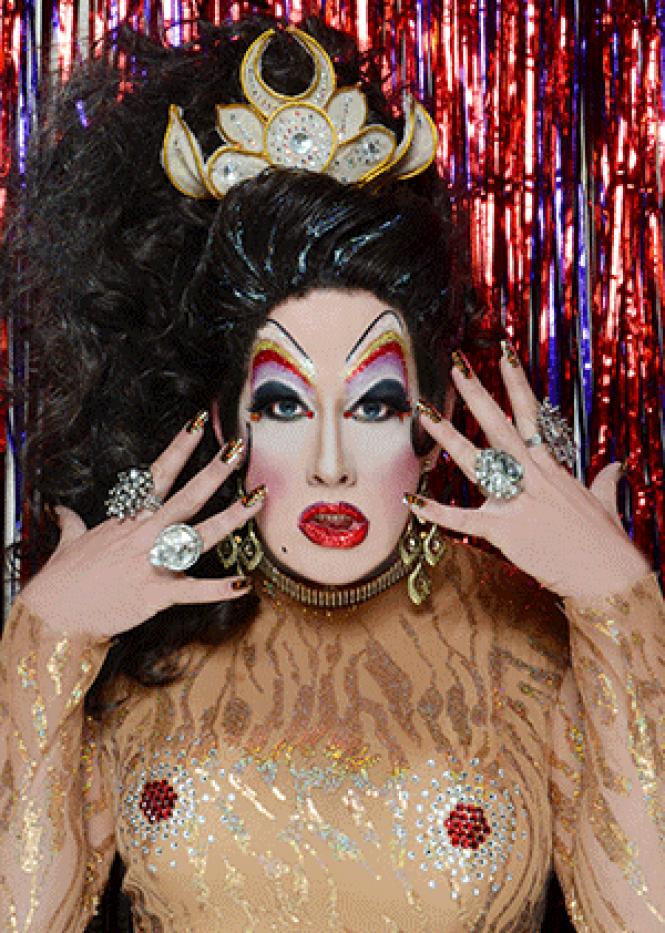 In 1995 director Paul Verhoeven, fresh off the success of his erotic thriller Basic Instinct (1992), tried to revive the X-rated art-film genre with Showgirls. Produced for the then-unheard-of budget of $45 million, Showgirls was an All About Eve-inspired tale of Las Vegas strippers, one of whom claws her way to the top on the back of the Strip's reigning jiggle queen. The film featured as much full-frontal nudity as Verhoeven could cram in. He also included a notoriously raunchy lap dance sequence that pushed the mainstream envelope. Unfortunately for the auteur, Showgirls tried so hard to be shocking that it became hilarious. It's now considered a camp classic. That's where Peaches Christ comes in. On Aug. 10, Christ takes to the stage of the Victoria Theatre as the star of Showgirls: The Musical! She will be directed by Joshua Grannell, her alter ego.

"I love to say that Showgirls is the best movie ever made because people who love it like I do know what I mean, and that same statement infuriates and confuses people who don't really get it," Grannell told the B.A.R. "If a movie could be a drag queen, it would be this one. The film is so extreme and beautiful, overly dramatic, offensive, funny, glamorous, and scandalous. It's drag! It's nonstop entertaining."

Grannell is also a filmmaker whose credits include All About Evil, a low-budget slasher flick primarily set at the Victoria Theatre. All About Evil 's cast includes gay actor Patrick Bristow, who stole a few scenes in Showgirls as Marty, the bitchy queen choreographer.

"Patrick is a brilliant comedy actor, so it was a real thrill after we'd done a Showgirls event together that he agreed to be in my first feature film," Grannell said. "I've been fortunate that in my strange career as a cult-movie leader I'm able to work with people from the movies we worship! But we don't have any of the movie cast in the musical version."

Grannell promised that Showgirls: The Musical! will delight fans of the original, as well as the many who enjoy Peaches' incomparable brand of over-the-top humor. "This truly is a complete musical version of the movie Showgirls, from start to finish. The creators Bob & Tobly McSmith are brilliant parody writers and musicians. It's as epic as the film is, with over 22 songs, live singing, live musicians, incredible dancing, and onstage nudity."

But don't bring the kids, Grannell warned. "The musical is as offensive as the film is. This is why the show is age-restricted. Fans of the film will appreciate all of the special nuggets and nods that have been included."

Showgirls: The Musical! has already amassed a following after its two successful runs in New York City. "Three of the original New York cast will be performing in the San Francisco version, including Rori Nogee, Marcus Desion, and April Kidwell as Nomi." Nomi, portrayed by Saved by the Bell 's Elizabeth Berkley in the film, is the story's ambitious stripper, determined to become a star at any cost. Berkley threw caution to the wind when she performed that infamous lap dance, shocking her TV show's family-friendly fan-base. "April's performance as Nomi must be seen to be believed," said Grannell. "It's a spectacle in its own right."

Grannell is particularly happy that Showgirls will be mounted at the Victoria Theatre, and says the cast will be available for nightly meet-and-greets with the audience. "I'm super-excited to be moving into the Victoria for a while because this theater is such a gem in the Mission and has hosted so many community events over the years. It's also where we shot All About Evil, so I'll always feel connected to it. Right now, there is so much great musical theater happening at the theater thanks to Ray of Light, who mount incredible musicals there, and now Bay Area Musicals as well. It's wonderful to see the theater so alive!"

Grannell's stay at the Victoria has already been extended. Due to popular demand, Showgirls: The Musical! will offer performances until Aug. 27, Wed.-Sat. at 8 p.m. Tickets ($32-$45) are available at the Victoria Theatre box office or by visiting store.peacheschrist.com/category/9-show-tickets.aspx.