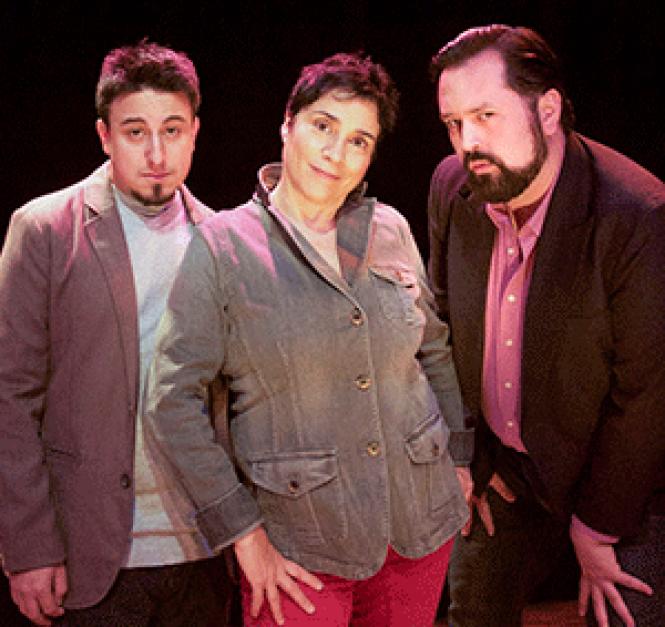 Lesbian comic Marga Gomez will be partying onstage at the Brava Theater Center on New Year's Eve. She'll be joined by a few of her funny friends, and you are invited to be part of the festivities.

Gomez, who's been named Best Bay Area Comedian by SF Weekly, the Bay Guardian and the B.A.R., has also attained a national audience via her appearances on HBO, Logo, Comedy Central and PBS, as well as for her live performances in far-flung locations such as New York City, Montreal and Edinburgh. Half-Cuban, Gomez spends part of her time apologizing for Ted Cruz and Marco Rubio, the Latino presidential candidates known for their conservative, anti-LGBT views. Gomez's fan base has included the late Robin Williams, who said that she was "amazing, a lesbian Lenny Bruce."

The New Year's Eve show has been dubbed the Latino Power Edition. It's the 4th Annual Brava New Year's Eve Comedy Fiesta, and commemorates what Gomez calls "the brink of the most bizarre Presidential electionÂ in US history." Gomez wants "cheeky brown people to come to the aid of sanity by building a wall of punchlines for everyone to enjoy except Donald Trump.

"It looks like the fate of mankind and the planet could be in the hands of the creator of Celebrity Apprentice, " Gomez explained to the B.A.R., "a schlocky show I used to watch until Trump fired George Takei. That's when I knew Trump sucked. George Takei for President!"

The Comedy Fiesta, Gomez tells us, was in the works before Trump's candidacy. "Because Brava is located in the Mission, a gay-friendly, Latino-themed comedy show seemed like fun," she said. "When some of the GOP candidates began framing Latinos as criminals and low-lifes, shit got real. Now I worry if I don't get laughs, should I self-deport?'

The comic's words for the current crop of GOP presidential candidates are as wild and crazy as the stands the candidates take on social issues.

"Dracula called, he wants his demeanor back," Gomez said of Ted Cruz.

"Do you have any Quaaludes left?" she asks of Dr. Ben Carson.

Gomez cheerfully spoke of her career for those who might not yet be familiar with her work.

"I'm one of the first openly queer comedians in the nation, and I got my start at legendary San Francisco cabarets Josie's and Valencia Rose," she recalls. "I have performed all over the States and abroad. Besides stand-up, I also write and perform solo theater. For the last four years I've had the honor of curating Brava's New Year's Eve Comedy Fiesta ." Gomez added that her most recent solo show, Pound, recently completed a six-week run at Brava, where she is also the artist-in-residence.

Gomez is quite excited about her line-up of performers, and particularly enthusiastic about Baruch-Porras Hernandez. "He's a San Francisco treasure," she said. Porras-Hernandez is currently the host of San Francisco Queer Open Mic at Modern Times Bookstore, and regularly hosts KQED Arts.

"Being gay and Mexican is like listening to your parents cry in Spanish in your head every time you have sex with a man," says Mexican native Porras-Hernandez.

Others in the line-up include Lydia Popovich from Comedy Central's Drunk History, San Francisco Punchline and Harvey's Funny Tuesdays in the Castro. Also included will be comedian-playwright Monica Palacios, Chris Storin, and Betty Pazmino. The show will be followed by Brava's Countdown Dance Party to ring in the New Year.

"We will have party hats, noisemaker dancing in Brava's grand foyer, and free champagne," promises Gomez.