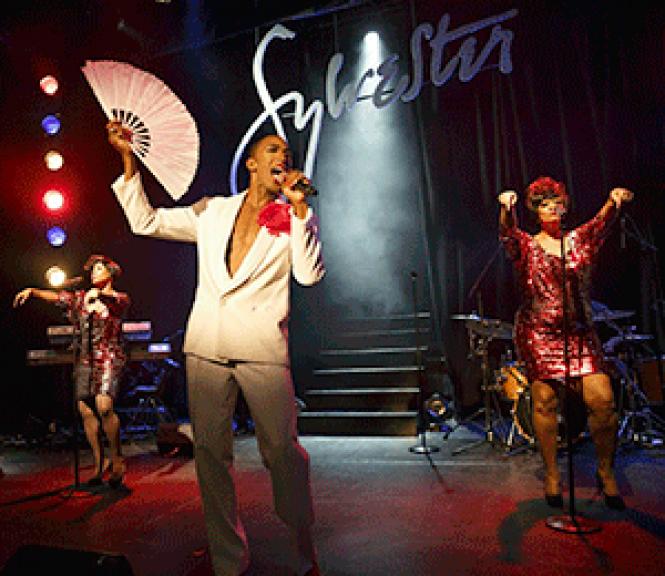 "What did your family say when they found out you were going to be a drag queen?"

That 1986 exchange between Joan Rivers and Sylvester can easily be found on YouTube, and the singer's response is repeated in Mighty Real: A Fabulous Sylvester Musical. By the end of the fast-paced musical biography, we are happily convinced that he was indeed his own fabulous creation. But you might know that already.

Mighty Real was first seen last year in New York, but its San Francisco run at Brava Theatre Center feels more like a homecoming than a follow-up engagement. Sylvester James Jr. was born in Los Angeles, but it was in our city that he could personally flourish, develop a career that followed no previously established groove, and where he drew his last breath less than two years after his appearance on Joan Rivers' talk show.

The new musical posits that Sylvester has been granted one more night to tell us his story in his own words. And, of course, through his music. Outfitted in a fur coat, sequined top, and leather pants, Sylvester makes his entrance in the form of Anthony Wayne, a youthful Broadway veteran who authored the show and co-directed it with Kendrell Bowman (also the costume designer). "I'm going to take you on a journey of fantastic highs and some interesting lows," Wayne, as Sylvester, tells us at the start.

It is necessarily a shorthand version of Sylvester's life, a mix of the revelatory and platitudinous, but Wayne effectively communicates the key junctures. As a singer, Wayne can certainly take his voice to stratospheric levels, but the texture and warmth that Sylvester projected can get lost in the heavily amplified show. It's also a problem because Sylvester's two most recognizable disco hits are saved for the finale, with less distinguished songs from his catalog providing much of the show's middle.

But Wayne is not the only performer who gets to sing, and some of the brightest musical moments come early on in the form of hit songs by other artists who Sylvester tells us helped inform his musical identity. Anastasia McCleskey, Jacqueline B. Arnold, and Deanne Stewart take turns performing such songs as "Respect," "Proud Mary," and "Lady Marmalade" in the styles of the original artists, and McCleskey and Arnold also play Sylvester's backup duo Two Tons o' Fun â€" later known as the Weather Girls, and, yes, "It's Raining Men" is in the show. A five-piece onstage band provides versatile accompaniment.

Sylvester made his last major public appearance in a wheelchair at the 1988 Gay Freedom Parade leading the People with AIDS contingent. When the onstage Sylvester began recalling this moment, there were bursts of applause from some in the audience who may well have experienced the moment first hand. But a musical with "fabulous" in its subtitle isn't likely to end on a somber note, and it takes no coaxing to get the crowd on its feet as "Dance (Disco Heat)" and then "You Make Me Feel (Mighty Real)" get full-throttle treatments. The musical makes it clear that that's the way Sylvester would have wanted it.