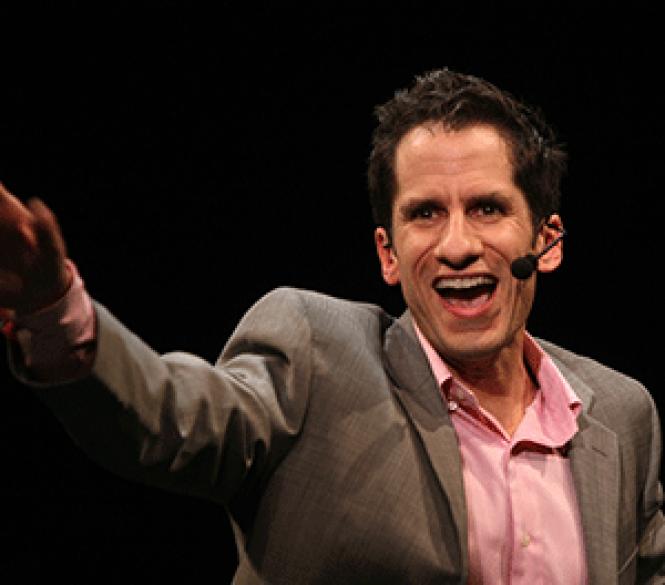 Broadway maven Seth Rudetsky will share comic audio and
video clips as well as his storehouse of musical theater trivia in Seth's
Big Fat Broadway at Feinstein's at the
Nikko on Sept. 13-14.

Seth Rudetsky is an ad for A.D.D. â€" not for its treatments, but for how to make showbiz lemonade from attention deficit disorder. He writes novels, he hosts a radio show, he conducts orchestras, he acts on stage, he plays piano for stars, he creates musicals, he makes copious YouTube videos, and he tours in his own nightclub act. It is that last category that is bringing Rudetsky to Feinstein's at the Nikko on Sept. 13-14 to perform Seth's Big Fat Broadway.

"It's sort of like being in my living room," Rudetsky says of the show, which in fact incubated in Rudetsky's living room. He'd invite friends over to watch his collection of embarrassing video clips, like the Osmonds doing a medley from Fiddler on the Roof, Cher playing the entire cast of West Side Story, or Ann B. Davis' character Alice singing "Shake Your Booty" on The Brady Bunch Variety Hour. "My friends loved it so much," Rudetsky said, "so I started thinking I should put all that into a comedy show."

The video clips, about 10 of them, come in the second half of the show. The first half has 50 audio clips that can be instructional, funny, and usually both. "It's really a lecture show about Broadway, but it's done as a comedy show so people don't realize when they leave that they've been educated," Rudetsky said. "You don't need to know anything about Broadway to love it."

Rudetsky has a large YouTube following for his "deconstructions" of Broadway performances in which he talks about, for example, how a singer might insert idiosyncrasies into her (it's usually a her) delivery â€" brief moments that might bypass a casual listener, but that fascinate Rudetsky. These videos, recorded by himself in his apartment, tend to be more instructional than comic, but Rudetsky's show-queen glee in sharing these tidbits usually makes them funny anyway.

Rudetsky is definitely a fast talker, in the literal rather than pejorative sense of the word. Perhaps it stems from his A.D.D., to which he makes frequent references. It seems he can't wait to get to the next sentence. The condition may now work for him, which hasn't always been the case. High school in Long Island was a nightmare for Rudetsky, even though he was always performing in something. "I was able to be in chorus and chorale and special chorus and orchestra and band as well as theater," he said. Ironically for a theater-based entertainer, he had the hardest time in the theater program.

"I was definitely victimized in regular school, and theater and music saved me from all of that," he said. "Because I had a lot of talent in a lot of ways, I was sort of acting out on the bullying by being very snobby. But instead of sitting down and talking to me, the theater teacher decided to punish me by not casting me in shows and failing me at theater. He was horrible, telling me I would never make it in theater. He was such a dick, but I did make it in theater no matter what he fucking told me."

Early in his professional career, Rudetsky was a popular substitute in the Broadway orchestra pit when a regular pianist had to skip a performance. On some weeks he could be heard playing for five different musicals, which suited his personality just fine. He went on to become a comedy writer on Rosie O'Donnell's talk show ("It was really difficult for me to be there eight hours a day"), and has since happily kept his hand in many showbiz pots. He also married his partner, playwright James Wesley, in 2012, and together they are rearing a teenage daughter.

Rudetsky now is focusing most of his professional concentration on getting his satirical musical Disaster! to Broadway. Based on the disaster movies of the 1970s and 80s, such movies as The Towering Inferno and The Poseidon Adventure, and using songs from that era to help tell the overblown story, the musical had a well-reviewed run last year off-Broadway.

"It will be a big deal for me because I co-wrote it, did a lot of the musical arrangements, and I'm starring in it. And it will be on Broadway, which is a dream," Rudetsky said. "I get to do so much of what I love to do, and I get to do them all in the same place for a change."

Seth's Big Fat Broadway will have performances, Sept. 13-14, at Feinstein's at the Nikko. Tickets are $35-$50, available through ticketweb.com.