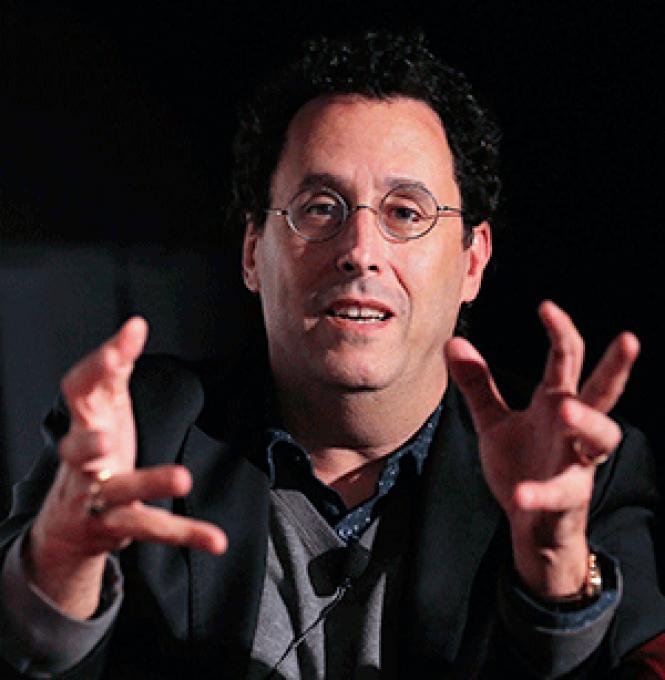 Angels in America
playwright Tony Kushner chose Berkeley Rep for the first post-New York staging
of his latest work, The Intelligent Homosexual's Guide to Capitalism
and Socialism With a Key to the Scriptures.

Ever since Angels in America announced Tony Kushner as a playwright of enormous talent and even more daring, there have been followers with a pressing desire. When would Kushner write another "gay" play? No creative artist wants to be pigeonholed or pressed to fulfill some sort of quota, but Kushner said as far back as 1998 that he was "somewhat defensive" about that question.

In a recent phone interview from New York, en route to the airport for an SF-bound flight, he reaffirmed that it remains a hovering question even if its intensity has abated since Angels was born in San Francisco in 1991 and went on to win just about every prize as it moved to Broadway two years later. "People sort of gave up," he said of the "gay" play expectations as he continued writing on a diverse collection of other subjects. "But I have heard from people who ask, 'When are you going to do your next play about us?' They think I've lost interest. I hope not, but there are people who read it that way."

After all, Angels in America was subtitled A Gay Fantasia on National Themes, and it placed the AIDS epidemic into a sprawling context of intimate personal stories, national and international politics, historical ghosts, and even cosmic intervention. At the time, it was like a shot across the bow of a society conflicted by its own health, history, and capacity for redemption. His latest play again gives titular billing to those who may have wondered whither the gay Tony.

The Intelligent Homosexual's Guide to Capitalism and Socialism With a Key to the Scriptures opens this week at Berkeley Rep, a safe haven for the playwright, who has taken a hands-on approach during rehearsals at Rep's six preceding Kushner productions. "I guess I have a tendency to sort of label it when something might be considered a gay play," he said. "The Intelligent Homosexual's Guide, or I-Ho as we call it, is a gay play. I have no problem with that." It is the first so-labeled since Angels .

While acceding to a "gay play" label, and noting the fact that five of the 10 characters are gays or lesbians whose complicated issues are intertwined with a suicidal patriarch's gathering of the clan, the Homosexual title does not confer a particular LGBT imbalance to the central concerns of the play. As for the title, it partly paraphrases George Bernard Shaw's The Intelligent Woman's Guide to Socialism and Capitalism with a kicker borrowed from a treatise by Christian Science founder Mary Baker Eddy.

"The relationship of the title to the text is very literal," Kushner said. "If anyone can figure how this or any play is a guide to something, you are probably watching a bad play. This play is a story that contains the title rather than something that is described by the title." And partly, the title was just Kushner having some fun.

"I like Shaw as sort of an unapologetic champion of â€" I wouldn't call it arrogance or elitism, because Shaw really believed that stupidity is rarer than we think, that most people are intelligent even if they don't use their brains as well as they should," he said. "And I liked the conjunction of LGBT politics and politics of the body and desire and love, and there's a kind of complicated relationship between the brain and the rest of the body."

"Complicated relationship" is also an apt description of the Gus Marcantonio family, which includes his children, their spouses both current and ex-, and, in one case, a rented sexual companion. They have regrouped at the Brooklyn home of Marcantonio, a former longshoreman, labor leader, and socialist, in order to hear his reasons for killing himself â€" and to decide what they should do with this information.

The character of Gus and his motivations have been a major focus of Kushner's rewrites since the play's New York production in 2011. "I hope that it is now difficult when you watch the play to judge Gus. I didn't want to make him simply this guy who believed in this thing that wasn't true, and now look what happened to him. There is a way in which he believes that his suicide is a political act that is in some way an affirmation of the theories that have steered his life."

This may not sound much like a "gay" play, but three of his children are gay, each with a partner who is also in the play. "More than with Angels, I think the story is genuinely held by different ones of four or five of the main characters. I think in most of my plays there is a kind of battle over whose play it actually is."

Some of those characters include the oldest son, who is battling with his partner, most audibly because he has been spending thousands of dollars for the company of a hustler who is also on the scene. Some of that money was borrowed from his lesbian sister, nicknamed Empty, who had had that money earmarked to help with the expenses soon to arrive along with her partner's baby, achieved through artificial insemination from sperm donated by their younger brother.

"Empty is the child who is closest to Gus, and her partner is eight months along in a tricky pregnancy, and she's suddenly faced with how to care for an actively suicidal parent, not to mention her ex-husband, who is living with her father in a basement apartment," the playwright explained. "I don't want to do any spoiling, but Empty is very much implicated in one of the aspects of Gus' intentions to commit suicide. So it's all very tangled."

First seen at the Guthrie Theatre in Minneapolis in 2009 and at New York's Public Theatre two years later, the play hadn't yet felt finished to Kushner when he got a call from Tony Taccone, Berkeley Rep's artistic director, who also happened to have been running the Eureka Theatre when Angels in America premiered there in 1991. "I was trying to figure out where next to do the play where I could do the work I knew I wanted to do," Kushner said. "I've been working on it for five years, and I really feel it is done â€" at least for now."

The Intelligent Homosexual's Guide to Capitalism and Socialism With a Key to the Scriptures will run at Berkeley Rep through June 29. Tickets are $29-$99. Call (510) 647-2949 or go to berkeleyrep.org.