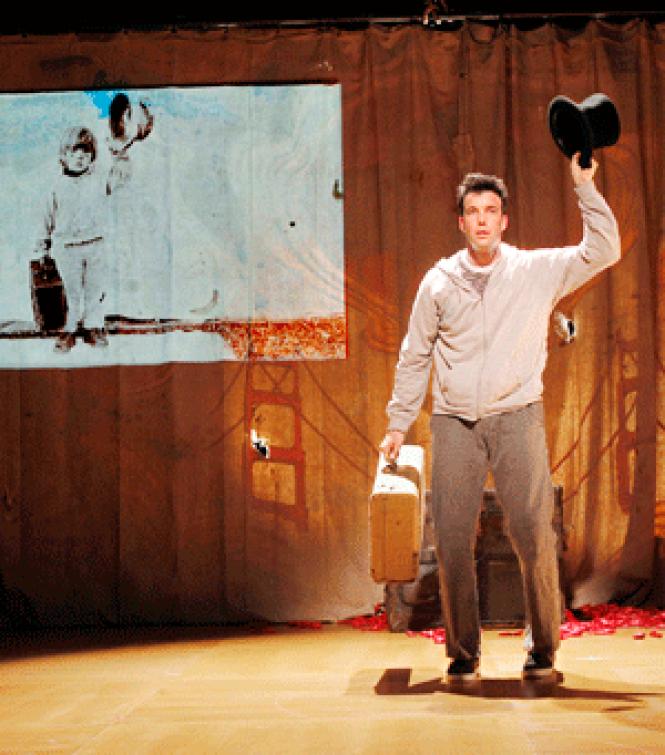 Lorenzo Pisoni recreates a pose from his childhood days
with the Pickle Family Circus, an experience poignantly described in Humor
Abuse at ACT.
(Photo: Chris Bennion)

Lorenzo Pisoni has a couple of confessions to make at the start of Humor Abuse. "I sweat a lot," says the performer, who soon confirms that statement. He also says, "I'm not funny." But that claim should be taken with a drop of salty sweat. Pisoni certainly knows how to be funny, which he proves over and over again at ACT, but he's not funny in the way that mirth flows instinctively from his pores whenever there is an audience at hand. His father had that jolly gene, putting it to use as a founder of the Pickle Family Circus, but it did not get passed on to Lorenzo.

It's almost as if Larry Pisoni created a son who had been genetically engineered to be his straight man. That's an odd situation for a 6-year-old to find himself in, a kid who began to realize that the joyous sound of children's laughter didn't often include his own. He was too busy learning how to fall down a flight of stairs. "Don't try to protect yourself," his father would admonish after a timid attempt at tumbling the treads. "Let gravity do its job." And it eventually does, as Pisoni later performs a sketch that requires repeated examples of thump-thump-thump downward locomotion.

Pisoni narrates his story of growing up in the circus, as well as relating his father's circuitous route into circusing, with samples of his father's act along with some new routines developed with director Erica Schmidt. Lorenzo was both straight man and stooge for his father's clowning, and he had to share trunk space with a puppet replica of himself that his father would carry onto the stage on his back. The shifting light flowing through the air holes drilled into the trunk was little Lorenzo's GPS system for where he was on stage.

As Pisoni describes the odd and outlandish world of his childhood, he punctuates his comments with assurances that these events really happened. Photos projected on the curtains continually verify his version of the events.

For Larry Pisoni, clowning was very serious business, and the father-son relationship was as professional as it was personal. But Papa Pisoni could also be a prankster targeting his own son, though the plastic banana he packed in Lorenzo's lunchbox everyday grew tired for Pisoni the younger. To get dessert, father made son play a game of can you top this double-take expression, and as Pisoni plays both parts, his face turns into an accelerating shuttle of ever-widening eyes. It's hilarious, again belying Pisoni's claim that he isn't funny.

As a trained actor, he plays the truth in the absurdity, and this is how he can generate his own laughs. His showmanship is in top form in a clown sketch in which his character, complete with flippers and diving mask, tries to climb a high-dive ladder for a jump into a small bucket of water. His increasingly dispirited preparations are a comic delight, even if Pisoni says he isn't funny.

Pisoni actually lasted longer with the Pickle Family Circus than did his father, but finally the teen opted for a sedentary life with mother Peggy Snider, and enrollment in a regular SF high school. There were more circus detours as he worked his way through Vassar, but most of his post-Pickle acting has been of the traditional sort.

Pisoni concludes the show by brilliantly recreating one of his father's balloon bits, and the audience happily tags along until an ill-fated denouement. It provides a bittersweet conclusion that had been set up earlier in the show, and the title Humor Abuse takes on even more levels of meaning. Don't worry, this is an engagingly humorous show, and the only abuse is a father who wants to pass the circus baton on much too quickly â€" like by a decade or so.