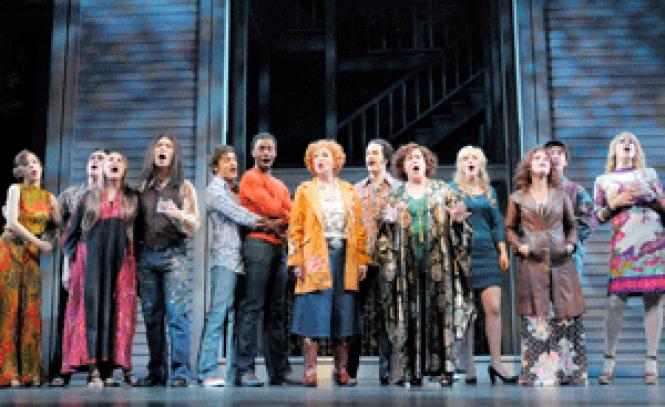 The cast of Tales of the City
sings a group number in the new musical about San
Francisco in the 1970s in the ACT world premiere. (Photo: Kevin Berne)

The man most responsible for transforming Armistead Maupin's Tales of the City into a musical was only five years old when the serialized story began its newspaper run in 1976. But Jeff Whitty, a Tony Award-winner for Avenue Q, doesn't look back on those days as either nostalgia or a benighted period when gays and lesbians had scant social acceptance.

"In a weird way, it feels like we've taken a huge step backwards," Whitty said during a break in a fine-tuning rehearsal before one of the preview performances at American Conservatory Theater. "In many ways, Tales of the City feels like my ideal possible future. There's almost something utopian about it."

It's been more than five years since Whitty convinced author Maupin that his vision for a musicalized Tales, which had already had several previous unsuccessful startups, was worth his trust. "I feel like I'm sort of channeling Maupin as if he were a musical book writer, and he and I share a certain sensibility so sometimes I can't remember if the dialogue is Armistead or if it's me."

Maupin, an iconic SF figure, was writing about contemporaneous life when he began the Tales series in the 1970s. The initial impetus was a possible feature story on the Marina Safeway's popularity as a heterosexual meeting ground. But in the Tales series, Maupin introduced characters not only straight, but gay, lesbian, transgender, black, white, filthy rich, dirt poor, and even a whorehouse madam.

"One of the things Armistead has issues with is that bookstores always put Tales of the City in the gay fiction section even though more of the characters are straight," Whitty said. "I think the reason is that he put gay characters on an equal footing with the straight ones. They're just as flawed, funny, interesting, damaged, and yearning as straight people, but I think it was such a shock that it overrides what people see in the other characters."

At times, Whitty himself gets frustrated at being filed into a gay niche. "But then again, I don't want to be like everybody else. I think straight people need to get their shit together and realize how much we bring to the table."

Maupin's newspaper columns evolved into a series of novels, and Whitty is using Tales of the City

The newly out gay Michael Tolliver (Wesley Taylor) and SF newcomer Mary Ann Singleton (Betsy Wolfe) form a bond on Barbary Lane in Tales of the City. (Photo: Kevin Berne)
and More Tales of the City for his libretto. "We do stick with what works in musical theater," Whitty said of the structure of the piece. "But at the same time, what makes Tales different is the multi-storyline, and I didn't even know for five years until the first preview if that would work."

Though the Tales of the City series is often cast in gay terms, the lead character, Mary Ann Singleton (Betsy Wolfe), is a young straight woman just arrived in San Francisco with the intention of reinventing her life. Her quest is accelerated when she rents an apartment on Barbary Lane, modeled on Macondray Lane, where landlady Mrs. Madrigal (Judy Kaye) is a mysterious but motherly type who believes in the affirmative properties of pot, and whose tenants notably include Michael "Mouse" Tolliver (Wesley Taylor), who is exploring his gay sexuality with gleeful abandon. There are more interweaving subplots and characters too numerous to mention here.

The first preview came in at three hours and 20 minutes, and Whitty expected the show to be running at two hours and 55 minutes by opening night. "For me, it's a blessing to have to cut the show down," Whitty said, "because the goal is always to stay one step ahead of the audience."

Jeff Whitty, who won a Tony Award for his book for Avenue Q, is the prime instigator for turning Armistead Maupins Tales of the City into a musical. (Photo: Kevin Berne)

Since he was the prime instigator of the project, Whitty was in the position to choose his collaborators. For director, he asked Jason Moore, with whom he so successfully collaborated on Avenue Q. For the songs, he strayed from Broadway veterans to ask flamboyantly out Jake Shears, songwriter and lead singer for the Scissor Sisters, to write the score, and Shears in turn brought in bandmate John Garden.

"One of the incredible things about working with Jake and John is that the Scissor Sisters are such chameleons," Whitty said. "If you listen to their albums, very often their songs will sound like they were written in the 70s, but it's still entirely fresh. These guys get under the hoods of the characters, and the fact that they're not from the musical theater has given them a certain degree of risk-taking that I'm not even sure they're aware of."

When Whitty roughed out his script, he indicated places where he thought a song would be appropriate, but he also worked backwards from the songwriters' passions. "They wrote a song called 'Paper Faces' for the end of the show, and it's a scorcher. For me it was about building backwards from the top of Act II to give Mary Ann justification to sing it. And Jake said he really wanted to write a song for the A-list gays in the book, and he turned it into 'Homosexual Convalescent Center,' which is this huge burst of energy in the middle of Act I."

While the high-profile producers of Rent and Avenue Q were associated with the project when it had a workshop at the O'Neill Theatre Center in 2009, according to Whitty, they amicably parted ways shortly thereafter. The entire $2.5 million budget â€" high for ACT, a pittance on Broadway â€" was raised locally by donors as opposed to investors.

"It was a mutual agreement to let us develop the show without commercial pressure," Whitty said. "Within 48 hours of them stepping off the project, [ACT Artistic Director] Carey Perloff had snapped us up. We wanted the show to be homegrown, and it's better for it."

The future of Tales of the City after its summer run at ACT is uncertain. "It would break my heart if this was the only shot it got," he said, "but that doesn't mean it has to head straight to Broadway. I just want it to have a life. People always look at me like, 'Oh, you're holding out on us' when I say that about the show's future."

In fact, after Tales is up and running, Whitty soon heads into production for a new musical based on the cheerleading movie Bring It On. It begins a tour in Los Angeles in November, and will play SF in December without a Broadway stop on the itinerary.

There was time for a final question before Whitty had to head back into rehearsals: Have you been sleeping well? "Not for the past few weeks, but that's what July and August are for."