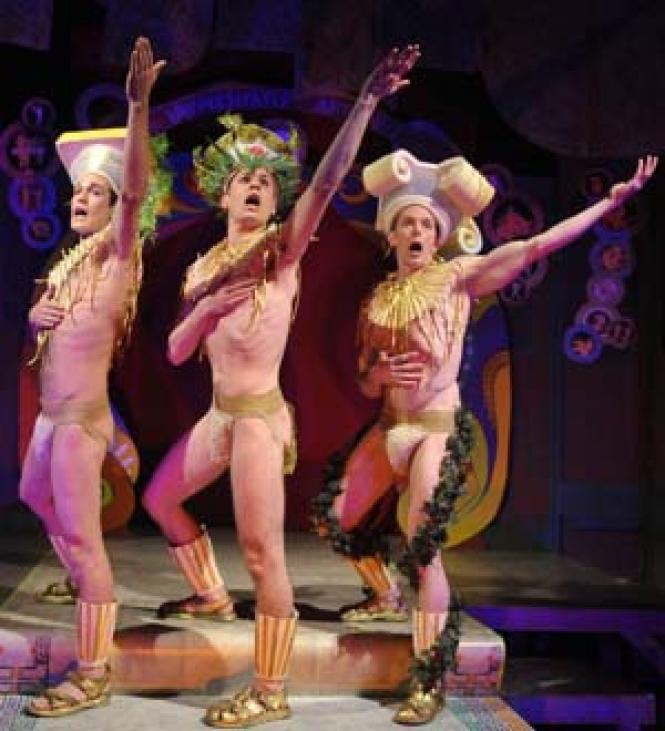 If you can't top it, at least you can complement it. Which also becomes a compliment to the complemented.

No sane mind could have imagined that when Thrillpeddlers revived the Cockettes' 1970 musical Pearls Over Shanghai last June, it would still be running a year later. Then again, sanity wasn't exactly a foremost precept of the Cockettes, and if Thrillpeddlers offers a kindred sense and non-sensibility, there has developed a savvy marketing approach to the lunacy.

Adding the 1972 Cockettes musical parody Hot Greeks into a rotating repertory with Pearls Over Shanghai is a smart move, giving a contextual gravitas to the slighter show, especially for those who have seen the texturally richer Pearls Over Shanghai. And that context is further enhanced once Hot Greeks has strutted its hour upon the stage as, after an intermission, musical director Richard "Scrumbly" Koldewyn takes us on a casual stroll down the lavender lane of Cockettes musical memories. His nuggets of historical info lead into selections from several more Cockettes extravaganzas.

"We did a show a month," says Cockettes performer-composer Koldewyn. "We just dashed them off. We had no attention span whatsoever." In these vignettes, as well as in Hot Greeks and Pearls Over Shanghai, you can often see talent, ingenuity, and reverence, as well as that slap-dash exuberance.

Hot Greeks pays tribute, of a sort, to those college musicals of the 1930s and 40s when a student protest might mean that a freshman refuses to wear a beanie. The script by Martin Worman, who also provided lyrics to Koldewyn's pastiche-driven music, mashes together the notion of Greek fraternities and Greek dramas, even starting out with a deadly serious scene from Medea that turns out to be a class exercise. But as the Dean Pompous (a comically fustian Lanny Baugniet) points out to his jive-happy students, the ancient Greeks had their comedies, too.

And so begins a cockeyed campus variation on Aristophanes' Lysistrata, in which the sorority gals conspire to withhold sexual favors to wrest their boyfriends' attentions away from their obsession with football. The soc-sister leader is Lysistrata, though it comes out sounding like Liza-strata (Liza with a Zeus, perhaps). Michael Soldier projects all the femininity of a fullback as this co-ed on a mission, and in a single sentence may orate grandly to the gods before slipping back into a vintage campus slang. "You're absurd, hummingbird."

The plot gets complicated in ways that can't be reassembled here, but the gender-fluid performances that help giddily move it along include Connie Champagne as the regal Clitoristra, Eric Tyson Wertz as the virginal Pandora, William McMichael as strapping football star Pendulum, Birdie-Bob Watt as Professor Myron, and Russell Blackwood as the imposing Mata Dildoes. And we mustn't forget those three prancing columns that make up the Greek chorus, each equipped with a headdress representing the Ionic (Bobby Singer), Corinthian (Michael Phillis), and Doric (T.J. Buswell) capital styles.

Blackwood, who also directed Pearls, has again managed to create to put polish on what could be mayhem, and Kara Emry and Morningwood have designed the costumes that can best be described as indescribable.

The second-act selections from such other Cockettes show as Circle of Life, or Poodle Shit, Journey to the Center of Uranus, and Tinsel Tarts in a Hot Coma are hardly meant to be sentimental, but there does develop an aura of historic respect for what the Cockettes achieved in their comet-streak across the San Francisco skyline. And that this material, so lovingly embraced by the Thrillpeddlers cast and crew, is again entertaining audiences four decades later gets downright touching. And that's no easy feat when the cast is singing about crabs on Uranus.

Hot Greeks will run on a rotating schedule with Pearls Over Shanghai at the Hypnodrome through June 27. Tickets are $30. Call (800) 838-3006 or go to www.thrillpeddlers.com.