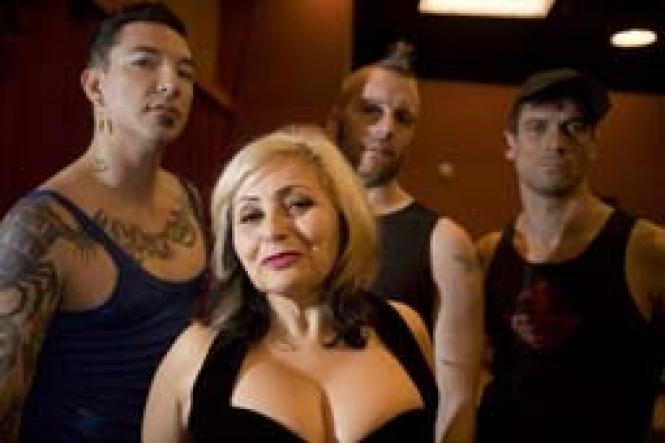 That omission is finally being rectified at the Brava Theater Center through March 7, where the New York icon and a troupe of locally recruited dancers are encouraging audience members, in Penny Arcade's words, to "be yourself, be even more yourself, be outrageous in your selfdom."

The diminutive but combustible performer, born 58 years ago as Susana Ventura, was sitting in a chilly office at Brava before beginning rehearsals. As a gritty New Yorker with a haughty disdain for all things Californian, she had never even visited the city until about 10 years ago. "Now that New York is totally gentrified," she said, "San Francisco seems wild and untamed and endlessly huge, with so much diversity."

Calling herself "a working-class intellectual," Ventura spent her adolescence both in reform school and on the streets of New York where, guided and protected by drag queens and gay men, she was calling herself a fag hag before she was legally allowed to buy a drink. In the pre-Stonewall world of Greenwich Village, that didn't stop her from finding her muses in gay bars.

"My goal every night was to get to sit at the table with the old queens," she said. "They were sophisticated. They had the fiercest wit. Sadly, we no longer live in an intergenerational world, and I'm kind of a bridge between the 1960s and 2000s."

Her teenage contacts led to work with John Vaccaro's Playhouse of the Ridiculous and a role in the Andy Warhol-Paul Morrissey movie Women in Revolt. She went on to work with many underground theater artists including Jack Smith, Charles Ludlam, and Hibiscus' Angels of Light. She was also a close friend of Quentin Crisp, and the two created a long-running performance/interview piece.

Ventura is working on a new solo show titled Old Queens, and as with Bitch! Dyke! Faghag! Whore!, it is being developed through improvisational performances. "What people will see in San Francisco is the organic result of five years of improvised work in front of audiences," she said. "It all started in 1990 when I submitted it to the NEA during the Sen. Helms censorship crisis. It was me kind of saying, 'Fuck you' to them."

Penny Arcade did not receive a grant from the NEA, but Bitch! Dyke! Faghag! Whore! has taken her to Australia and Britain, where the show was embraced by the mainstream press, as well as a long off-off-Broadway run in the 1990s. She returned to the piece in 2006 as a live event presented by the Los Angeles Gay and Lesbian Film Festival.

"I added six sentences, at the most, and much to my shock and chagrin, people thought it was written that year," she said. "A goodly portion of the audience was over 40, and you could feel how they felt about their experiences being acknowledged. Anyone under 43 years old came of age in an era of entitlement, that you are entitled to respect. People over 43 came of age in an era when you had to earn respect and authenticity."

A lot of those people, Ventura's friends and mentors, died of AIDS, and she broke into tears as she talked about the loss. "I believe I have a duty to the young people to talk about those people who were so brave and created the possibilities that exist now, and for what they did for me. My great achievement is that I'm a real person and not just some lame diva, so I'm proud that I can cry."

In several of the scenes, Ventura portrays characters who work in the sex industry. "The show opens with a phone-sex girl, which is based on real conversations I had with clients when I did the phones in whorehouses. And I play a prostitute named Charlene who was a friend of mine and who is extremely funny, and she talks about prostitution in ways that whores talk about prostitution among themselves."

The production also includes Ventura stripping while a video of the late actor Ron Vawter reading from Lenny Bruce's monologue about obscenity is projected behind her, and a segment in which she moves through the audience improvising on current events in her life and in the world. And then there is what she calls "a big dance break" in which the audience takes over the stage.

"It happened spontaneously one night in 1992, and now we make it happen," she said. "But this is a safe space. I tell the audience that if they do not feel like dancing, that is fine with us. However, if the reason you're not getting up to dance is you're afraid that people are going to look at you and judge, well, that's what people do."

Ventura calls herself "a bisexual fag hag,"   terms she knows haven't always been embraced by others. She is currently married, though living separately, from musician Chris Rael of the band Church of Betty. "I fell in love with him," she said, "because of who he is as a person, and not because he is a male."

While the performer known as Penny Arcade happily claims descriptions as a reformer and provocateur, she insists that, despite a reputation she acknowledged that follows her, she is not confrontational. "I've often wondered what it is in expressing my opinion that makes some people think I want them to agree with me. They think they're being bullied, and I don't give a shit whether anyone agrees with me or not. I want to be free to express my opinion, and I think, by maintaining my position in my work and for doing it for so long, I've earned that right."

Richard Dodds can be reached at BARstage@comcast.net.