Son of a con artist 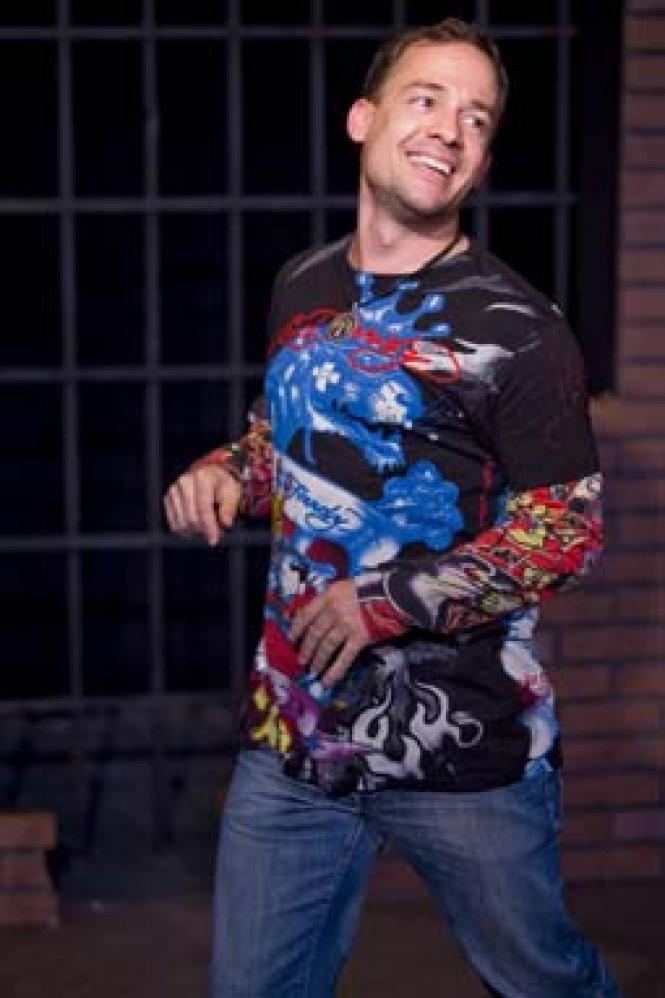 Like mother, like son. "My mother was a con artist," says Carlo D'Amore, "and I'm very much my mother's son. I had a choice, to be a con artist or be an actor. Frankly, I'd be making much more money as a con artist."

Last year, when his solo show No Parole had its premiere in a tiny theater near Union Square, he told the audience the venue was a lot like Guatemala City, a way station for his family en route to America from Peru. "It's like a black-box theater where I have to pee into a plastic bottle backstage." Moving on up in the theater world, he now has backstage access to a bathroom, and that bit of dialogue has been cut for a new production of No Parole opening this week at the Marsh.

There are other changes since that well-received production, including a new director (Margarett Perry), a more personal approach to the audience, and a clarity that D'Amore thought was sometimes missing in the earlier version. "I was afraid to share everything, and that was about me wanting to protect the memory of my mother," D'Amore said. "Now there's no guessing. My mother was a con artist, and the story is true."

There are dark and reflective moments in the tale, but much of it is told with the humor that time and distance can provide. And when D'Amore is portraying his dangerously charming mother or himself as her child-accomplice in one of the many flashbacks, the crimes of generosity,   desperation, and compulsion can seem more like a thrill ride than felonious connivances.

After his family made their way illegally into the United States, D'Amore often enjoyed the benefits of maternal chicanery. She bought him a car before he was legally old enough to drive, then provided him with a fake license. "My nickname in high school was Cash Flow," D'Amore said. "Even when we didn't have money, there was always the illusion of money."

But as D'Amore moved toward adulthood, he tired of the games and began distancing himself from his mother, especially after a bungled cocaine deal landed her in prison. Part of a new life D'Amore began creating for himself was in San Francisco in the 1990s, where he started on a life in the theater.

"I got cast as an understudy at Theatre Rhino in Men on the Verge of a His-panic Breakdown, and as part of the deal, I got to go on for five performances." He found he liked being alone on stage, performing one of Guillermo Reyes' monologues for gay characters, and ideas began percolating on how to get more solo time in front of audiences. It took a series of increasingly unfortunate circumstances before the kernel that became No Parole was hatched.

"Life is amazing, and I feel really blessed to have had the experiences I've had, even with all the craziness," he said, though his initial writings were rants to release anger and frustration. "It was, like, 30 years of stuff, and then all of a sudden I snapped."

After a decade in SF, D'Amore was living contentedly in New York in "a swanky bachelor pad," with enough work to pay the bills, and a steady boyfriend to keep him company. Then his mother had a stroke, and a call came from one of his brothers pleading with D'Amore to take her in. "My mantra became, 'My life is over,' but I had also learned to be very adaptable, and it all kind of worked."

Except when he caught her forging a check to pay the rent, and gave her an ultimatum that she go straight or else. She did it again. "I went ballistic," D'Amore said. "I started writing, and I wrote 80 pages single-spaced, and from that I took it down to five minutes of performable stuff." Offered a spot in a theater festival, he built it up to a 45-minute piece that he titled No Parole, with the subtitle Family Is a Life Sentence .

During the first SF run of No Parole, D'Amore did a single performance at the Marsh as part of the Marsh Rising series for works in development. That led to his current Marsh run, which was immediately preceded by an engagement at the Sacramento Theatre Company.

"I want to do this show anywhere and everywhere," he said. "Nobody has ever given me a role like this, so it was partly me creating a vehicle for myself. But I also feel I've come to a place through the writing of this of complete forgiveness of my mother."

Since his mother's death a few years ago, D'Amore has moved in with his boyfriend. "My mother loved him," he said. "And she loved the fact that she would be the only woman in my life."