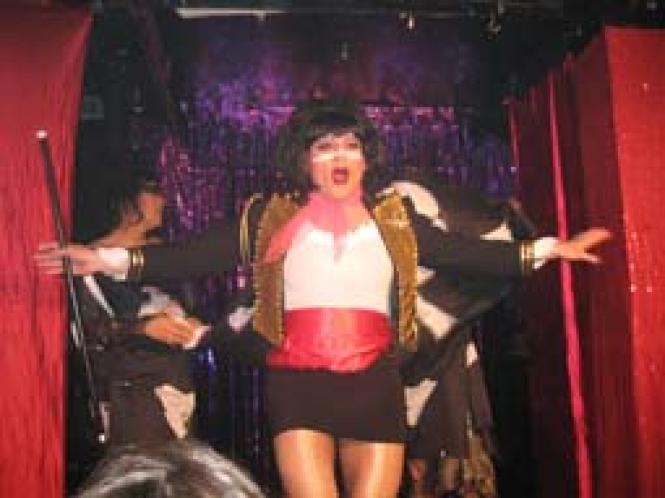 Heklina as Adam Ant in the recent Men in Make-up
night at Trannyshack. Photo: Courtesy Heklina

It isn't quite the end of Trannyshack. There will be tours, the annual pageant and the occasional holiday show. But as of August 12, the original show, crammed each Tuesday night onto a tiny stage in the venerable Stud Bar, will be no more. After more than a dozen years hosting the most talked-about drag show in town, Heklina needs a break.

For the hostess and creator (Heklina prefers not to divulge his real name), it all began in 1995. "I had just started doing drag roles with the Sick and Twisted Players," said Heklina in the office of The Stud bar before one of the last Trannyshack shows. "I worked here as a bartender and saw five or six clubs open and close on Tuesdays. The owner said, 'Would you want to try something?' So we started doing shows. I thought it would last eight weeks at the most, but it just took off."

Born and raised in Minneapolis, Heklina, 40, moved to San Francisco after living for a few years in Reykjavik, Iceland. "When I moved to San Francisco, I fell in love with the punk style of some of the drag queens," he said. "I never sat down and said, 'I want to be a drag queen and run a nightclub.' When it happened and took off, it was kind of like I was meant to do this."

With a sweet-natured insult-comic style onstage, Heklina rounded up a slew of performing pals, and soon saw others coming into the fold.

"There was a real need for Trannyshack," said Heklina. "There was a real void for an alternative venue. When Trannyshack started in 1995, people had just stopped dying of AIDS, because new medications came out," said Heklina. "It felt like a celebration after all that mourning, which was a dark year for me. I'd planned to go to some people's funerals, and there they were on stage with me."

"Steve Lady set the tone very early on for conceptual performance art," said Heklina. "He was one of the first to add fans, lighting, video, making it multi-layered. He raised the bar for everybody."

"It's hard to say that Trannyshack is still an underground thing," said Heklina. "It's become worldwide. Having it on a Tuesday night in a small club for all these years is what made it special. You had to really want to go. That's why it's been able to stay fresh."

Future plans include a Halloween show at the Kat Klub, the SS Trannyshack boat cruise, a New Year's Eve party, and the next Miss Trannyshack pageant. On August 23, the Trannyshack Kiss-Off Party will be held at the Regency Center to an expected packed house. Justin Bond, Lady Bunny and a slew of Trannyshack alumni will perform.

At the second command performance night before its closing, veterans of the show reminisced about Trannyshack's impact on queer culture.

"There's just nothing like the energy here," said Raya Light. "I don't think you can duplicate it anywhere, anytime."

Matthew Simmons, aka Peggy L'eggs, whose final contribution was a satire of Titanic, said, "People expect a certain kind of performance. It was a new kind of style. But on some level, we've almost become old school."

When he's not being outrageous in drag, Renttecca, aka Matt Mikesell, runs Bearracuda, the hirsute men's club at the Deco Lounge. Having done drag for nearly a dozen years, Mikesell said the two communities are similar in many ways. "There are a lot of quirky people, a lot of drama in both, sometimes more in the bear than drag community." Mikesell took to the Trannyshack community. "It was the first place I really identified with."

One of the club's more outrageous acts may have been his notorious performance, set to Crystal Gayle's "Don't It Make My Brown Eyes Blue."

"I had bad make-up and a wig, pulled two blue butt-beads out of my ass, and this giant glob of lube flew into the audience. Then I put the beads into my mouth. I haff dese gian' beads in my mouf while wipsynching, then fwew dem into the audience! I have never had such a reaction in my life."

The choice of co-curating Trannyshack's greatest hits fell to Bobby Barber, the show's lighting designer and Heklina's "gal Friday" since 2001. Since then, he's performed, even hosted the show, but mostly designs and runs the lights.

"Having only missed a dozen shows in 10 years, I have a better memory than Heklina," said Barber. "So a few months ago we sat down, decided on four weeks with a dozen queens per night, asked everyone to do what we thought were their best numbers. It's like honoring all the queens, a chance to show what the apex of Trannyshack was over the years."

And although dozens of acts are immortalized online, YouTube doesn't measure up. "It's not the same," said Barber. "You don't have the sort of drunken, visceral, communal joy, like you're in church."

The phenomenon of "faux queens," women performing as drag queens, exemplifies Trannyshack's diverse talents, including Monique Jenkinson, aka Fauxnique, who won the Miss Trannyshack Pageant in 2003.

"I was very welcomed by the men who do drag here," said Jenkinson. "Apparently, my winning Miss Trannyshack was kind of controversial, but everyone has been supportive."

What makes Trannyshack different from other drag or performance venues?

"It's really the drag of my generation," said Kenkinson. "We grew up on MTV and punk, with a little bit of art-school drag. It welcomes the ridiculous and the high drag. None of us look down on the Barbra and Judy impersonators. But for us, it's not about being a pretty woman. It's about creating this other thing, something other than a man being a woman."

Will other venues measure up to Trannyshack? "Hopefully, people will pick up where I've left off," says Heklina. "Some are trying to be the new Trannyshack, but others are doing their own thing, like Peaches Christ with Midnight Mass. I love Juanita More creating a whole scene around herself."

So, after a dozen years, the legacy of trash and vaudeville, flung fish and wigs, wigs, wigs, comes to an end of sorts.

"Twelve and a half years is really unheard of," Barber said. "There are people who perform here now who were nine years old when this started. It's just as good now as it's ever been. It's kind of sad that it's ending with all this great new talent. There are other venues, but what makes Trannyshack is Heklina's MCing and den-mothering. Heklina's turning 40, and doesn't want to get in drag every week. She's paid her dues."