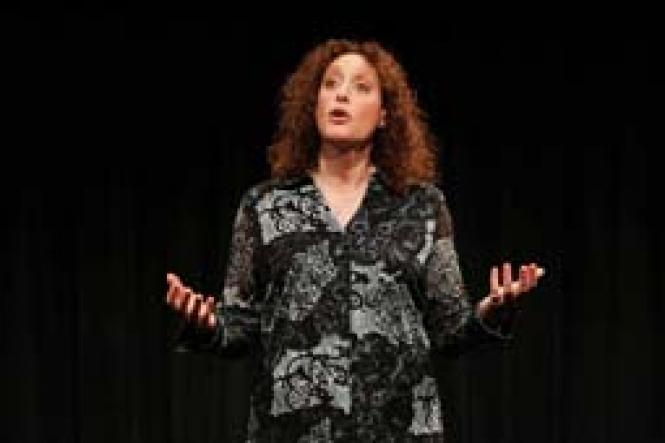 The title of Judy Gold's solo show at Marines Memorial Theatre may be its least inviting aspect. At least to someone who neither has a Jewish mother, is a Jewish mother, nor plans on becoming a Jewish mother. But 25 Questions for a Jewish Mother casts its net beyond the eponymous inquiries, and in its 75 minutes manages to deal Ã¢â‚¬â€ mostly comically, but occasionally seriously Ã¢â‚¬â€ with matters ranging from gay relationships to the Holocaust to the nature of standup comedy.

There are three zones demarcated on the stage: a microphone stand in a spotlight to our left, an upholstered chair to our right, and the middle ground from which Gold, as herself, elaborates on what transpires in the other areas. The mike zone represents her standup career as an out-lesbian comic, and we hear samples from her routines, most notably about her testy relationship with a mother who would seem to personify the stereotype of the Jewish mother. Indeed, moving to center stage, Gold tells us she has been taken to task in the Jewish press for promulgating these stereotypes, and with writing partner Kate Moira Ryan, she interviewed 50 Jewish mothers over the course of several years. When Gold moves to the easy chair, it is in their voices that she speaks.

The biggest motivation for the project, which had an off-Broadway run in 2006, was when she became a mother herself, twice, when both she and her former partner gave birth through artificial insemination. "I love my mother, but just didn't want to become her," Gold says, even as she and her partner returned to abandoned Jewish rituals with the arrival of their own children.

Some of the questions that Gold and Ryan posed were, "Who is your favorite famous Jewish mother?," "Do you approve of your daughter's choices?," "What would you have wanted to do if you never had children?," and "What is your biggest regret?" In identifying those being questioned, Gold always notes their Jewish affiliation: reform, conservative, orthodox, converted, non-practicing, etc. Gold gets heavy into character for the responses by the mothers, which range from light-hearted to heartbreaking.

While the theme of Judaism is omnipresent in the show, it can both transcend and invite us into that world. Gold is an attractive and confident performer who quickly establishes a comfortable rapport with the audience. Certainly, there are no religious boundaries to many of the topics that arise, including remnants of internalized homophobia that Gold sees in herself, the breakup of her longtime relationship, and the quest for approval from the mother who drives her crazy.

25 Questions for a Jewish Mother will run at Marines Memorial Theatre through March 23. Tickets are $39 & $49. Call 771-6900 or go to www.marinesmemorialtheatre.com.