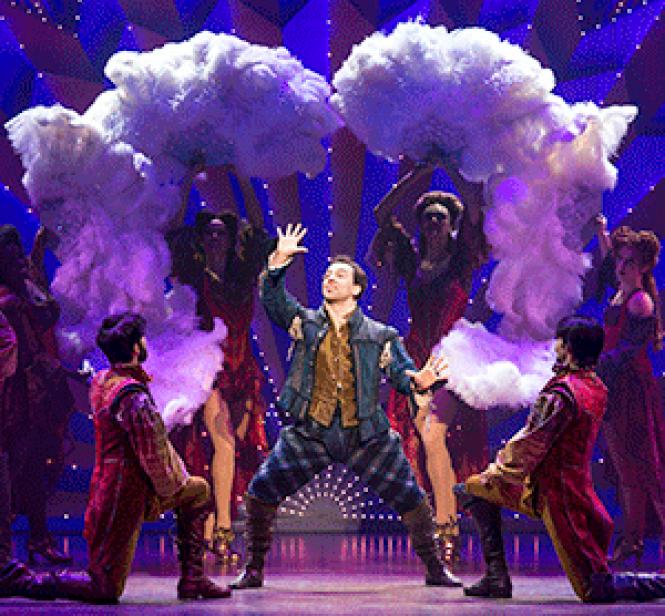 Rob McClure stars as an ambitious 16th-century writer in "Something Rotten," now at the Orpheum Theatre, who learns that to compete with Shakespeare a show has to have razzmatazz  (Source:Jeremy Daniel)

A typical bio in the "Who's Who" section of a Playbill rattles off the cast and creative team's various theater credits. For Karey Kirkpatrick, who co-wrote the book, music, and lyrics for "Something Rotten," his entry reads, "Broadway theater credits: none (please don't judge). Regional theater: nope!" But he is a co-creator after all, writing the songs with his brother Wayne, and getting help on the script from John O'Farrell. And their total combined theater credits: still zero.

"It was intimidating going in front of Broadway audiences without any of those credits people expect to see," Karey said recently. "But Wayne and I did start in musical theater back in high school in Baton Rouge. So it was sort of coming back to a first love."

Even so, that was more than 30 years ago, and with no professional theater credits, this team of Broadway unknowns brought in "Something Rotten" with no out-of-town tryouts or regional theater productions, and wound up with a hit. "It felt like an unlikely scenario even being involved in it," Karey said of the show that imagines how two brothers in 1590 England discover musical comedy as a way to compete with Shakespeare's success. He was speaking by phone in the car as he and Wayne were making their way to Warner Bros. Studios to work on a new animated musical titled "Small Foot" - a tale told from the Yeti point of view - that came their way thanks, in part, to the success of "Something Rotten."

The brothers, both in their 50s, were not exactly showbiz neophytes when "Something Rotten" opened on Broadway in 2015, now at the Orpheum Theatre in its touring edition. Karey has written and directed both live and animated features, including "Chicken Run," "A Hitchhiker's Guide to the Galaxy," and "Charlotte's Web." Brother Wayne found his way to Nashville as a record producer and songwriter, and took home a Grammy for writing the Eric Clapton hit "Change the World."

The notion for "Something Rotten" goes all the way back to 1995, with the brothers wondering what it would be like to be a writer in the 16th century always living in the shadow of Shakespeare's superstar adulation. Karey and Wayne, both with their own careers and growing families in different cities, would kick around ideas each time they'd meet. "It wasn't until 2010," Karey said, "that we said we're going to sit down and really focus on this."

Having worked in dozens of musicals at high school and in a local dinner theater, the Kirkpatricks figured the best way to upstage Shakespeare would be to offer Elizabethan audiences some song-and-dance razzmatazz along with a story. "And we said wouldn't it be funny if they went to a soothsayer who predicted the future of the theater would be musicals," Wayne said. "And hey, what if that soothsayer was Nostradamus, but when we looked it up, it turned out that Nostradamus died a hundred years earlier. So we thought maybe we can get away with it if we make our soothsayer his nephew Thomas Nostradamus."

Thomas tells the incredulous Nick and Nigel Bottom about this glorious coming theatrical form in which a character may burst into a song in the middle of a scene while groups of background players suddenly organize themselves into a dance routine. And so the Bottoms set out to write the world's first musical comedy that they title "Omelet." (Thomas Nostradamus' soothsaying skills are a bit wonky; he messes up the name of Shakespeare's upcoming big hit "Hamlet.")

Throughout "Something Rotten" - a phrase snatched from "Hamlet" if you haven't brushed up on your Shakespeare - many of the songs weave in an array of brief quotes from well-known musicals while tweaking certain musicals' more pretentious affectations. Some references are blatant; others so subtle that it could take a forensic musical-theater sleuth to identify them. "If you notice, a lot of the references are kind of old, going back to our days when our record collections were mostly cast albums," Karey said. Wayne added, "We were asked to put in a 'Hamilton' reference for the tour, but it seemed a little too easy. Even we have our standards."

When the Kirkpatrick brothers had a finished script, they showed it to big-time Broadway producer Kevin McCollum ("Rent," "Avenue Q," "Motown the Musical"), whom Karey knew from his days working at Disney. McCollum wasn't sure it was ready for prime time, so he suggested that British author and screenwriter John O'Farrell help pull the script together. Next on board was in-demand director Casey Nicholaw, whose credits include "The Book of Mormon," "Spamalot," and "The Drowsy Chaperone."

Nicholaw, who is gay, became one of the team's gay filters. "Because we are not gay, and there are plenty of gay references," Wayne said of himself and his brother, "we were always sensitive if we were crossing the line. But if Casey laughed, that was one of our checks and balances, and a lot of the suggestions actually came from him. We weren't there to offend. We're just there to have a lot of fun."

Most of the Broadway theater critics had a lot of fun, with the notable exception of The New York Times' Ben Brantley, who complained that "unchecked enthusiasm is not always an asset in musical comedy." That review still stings a bit. "It felt to me like he had an agenda to sway Tony voters because the horse he was backing was clearly 'Fun Home,'" Karey said. "Honestly, to me, it taps into what just happened in the last election. I do think there is an elitism that is not in touch with what people actually like."

Not that he couldn't grasp some of the resistance expressed. "There is a problem that if there's something you don't like with this show, if it's not your cup of tea, well, whatever that is, we do it a lot."