Big Freedia :: The Queen of Bounce at Mezzanine 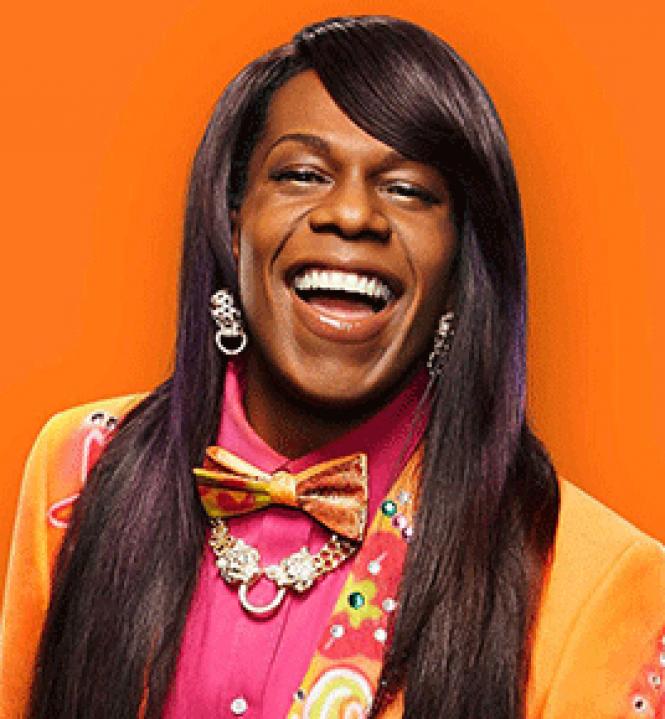 It is rare that black gay male culture is expressed without filters or censors, and is allowed to be real. The music sensation known as Big Freedia is an entity who comes along ever so rarely.

It is still more rare, in the 21st-century internet age, complete with social media and awful appropriation, that we see someone so warm and genuine.

Born Freddie Ross in 1978, the performer has been building his reputation since 1999, with roots in his home of New Orleans. Soon after the 2005 Hurricane Katrina evacuation, returned to perform at countless benefits, including FEMA Fridays at Club Caesar. Alternating between butch casual (jeans, a t-shirt, and a stylish hair flip) and high drag, Big Freedia defies gender categorization.

Along with the music title of Queen of Bounce, the hip hop musician was the subject of a five-season documentary TV series on Fuse. Set mostly in New Orleans, the show also included a New York World Record twerking event­.

Along with being sampled in Beyoncé's "Slay" song and music video (and bringing some New Orleans realness), has expanded his fame while also remaining one of the most charismatic people who have ever represented the LGBTQ community. His autobiography "God Save the Queen Diva" was published last year, and the performer recently evaded prison after pleading guilty to stealing nearly $35,000 in federal housing voucher money.

But is most prominently known for popularizing twerking through shows and music, to some controversy. His shows have been occasionally protested and cancelled. In America, we have no problem hearing sexuality in music, but we disconnect when we see it in dance. What we in America need to realize is that the ass is anthropological, as is the shaking of it.

Once again, braces the Bay Area with uncut black gay realness and some of the most over-the-top beats at live performances. On April 27, The Mezzanine will bounce and twerk and funk all over the place. In our phone interview with the performer, this is how it went.


Cornelius Washington: Thanks for the interview!

You've performed all over the world. What cities seem to be the most interested in bounce music?

Actually, all of them. They're all excited, in every market, to hear bounce music, and to see a little ass-shaking, too.

What dance do men perform, while the women are twerking?

There are several; The Peter Pan, The Shoulder Hustle, The Kick-Out. They do quite a few dances. Even with the girls, there's more than just twerking. We do The Shake, The Wiggle-Wobble, The Bust-Open, The Bend-Over, etc. We do all kinds of movement.

Let's talk fashion. I love to see you wear your great printed suits. Where do you get them?

Different places; I have a few people who design and make clothes for me. I go to tuxedo shops, high-end shops and high fashion stores. It just depends upon where I am, and in what city. I shop all over.

What have you not worn, that you are lusting to wear?

I have a few furs that I've not yet worn, because I have not been in cold enough markets to wear them.

RuPaul has also said that he's ready to rock a fur. More on him later. April 4 was the 49th anniversary of Rev. Dr. Martin Luther King's assassination. Any thoughts?

You had a unique response to the tragic killings at Orlando's Pulse Bar.

When that tragedy happened I got a tattoo that reads, "Love Wins" in its memory. I was very saddened by those people losing their lives to just nonsense, and my heart continues to go out to their families, friends and loved ones who are still dealing with this situation. I am still praying for them.

How has your gospel music experience informed your approach to bounce music?

Now, that's the quote of the 21st century! Were you nervous, the first time that you recorded bounce music, in the studio?

Very! I was nervous about everything ! It was something new for me. I had been in studios before, but, it had been with choirs, like being in a family. I felt love, but when I first recorded bounce music, I walked into the studio by myself. I was alone with my producer. It was a new beginning for me, a new venture that I was taking on, and it was all-around nervousness.

With and for whom would you kill to produce a song?

Oh, my God, all the greats; Beyoncé, Drake, Kendrick Lamar, P. Diddy and Kanye West! I would produce for every damned body!

What were the easiest and most difficult aspects of your reality show?

What fan do you have who, in a million years, you'd have never thought would be a fan?

I've seen you talk about your amazing experiences with her, and I have two co-workers who love Beyoncé, and they want you to please tell them something new about her.

She just a very humble person. We've connected, and we've been friends ever since we worked together. She's just so loving. People see her as just a big star, but at the end of the day, she's a human being. She wants to bring people joy and inspiration. I'm just very grateful for her.

Back to anniversaries. This is the one year anniversary of Prince's death. Any comments?

Oh, my God! Legendary! He's done wonderful things in the music world. Even outside the music world. I'm very saddened by losing him. The memory and images of him will live on, and his music will be with us forever. I'd never seen him live, but I'm very grateful that he opened doors for people like me, to just be who they are, without apologizing for it.

Thank you for saying that. Let's discuss RuPaul. How did you begin working with him?

Once again, the situation; he called me. He's legendary, very talented, very smart, very genuine. That's Mother Ru! She loves me and I love her. I was just very grateful when I got her phone call. I was very excited to work with her. I've been such a huge fan, for such a long time. I'm just very grateful that he reached out to me. He's done great things for the LGBTQ community. He's helped so many people, on so many levels. He's amazing; just a sweetheart.

I can definitely see you being a guest judge on his show. Do you think that that's something you'd be interested in?

Very much! I'm waiting for it to happen. It's way overdue.

I know that you love to design interiors. If you could decorate anyone's home, whose would it be?

Oh, my God! Beyoncé, Stevie Wonder, the Kardashians and Drake.

I can see myself doing Patti's home, too.

I want to tell you that I am a Katrina evacuee, and I go to the San Francisco Public Library to study. I saw your autobiography in the library. Of course, that day, I did not study. Instead, I sat down and read your book. We grew up in the same neighborhoods. We went to the same schools. You took me back to New Orleans, and I want to thank you for that. I really appreciate you for that.

You're very welcome, and congratulations for wrapping up school.

Thank you so much for saying that. If I were to return to New Orleans, and you were to cook for me, what would be on the menu?

Let's talk about my cooking. I'd make something very old Southern cooking for you; cabbage and rice, cornbread, probably with a smothered pork chop on the side, stuffed bell peppers, macaroni and cheese, sweet peas and potato salad... or maybe some barbecued ribs, mashed potatoes and gravy and corn on the cob. I'd do a crawfish bisque for you, too.

I haven't been back to New Orleans since I evacuated, and the only two things that I miss are the food and the music, and you serve the world both.

The culture, food, the music; these are the things that make us in New Orleans. It's what binds us together.

What do you think the future of bounce music will be, and where do you see yourself in it?

It will be elevated to new levels, new heights. It will influence other forms of music. It will push limits and boundaries, and I will always be its ambassador. I have a vision for the future, the creation of a Bounce School of Music, to teach younger generations about the bounce game and culture. I have a lot of ideas about things I want to do.

What do you think your pop culture legacy will be?

I think that I've already made my mark, and I will be remembered for creating great styles and sounds of music, and to keep opening doors for the city of New Orleans.

What do you think your LGBTQ culture legacy will be?

Big Feedia busts down doors. She broke barriers, and did things that were previously thought to be impossible. She took it to another level and a new generation. I will be like Sylvester and RuPaul, and I will move us all forward. I will continue to carry the torch of true LGBTQ culture.