Skating into History: The Lavender Tube on sports, SVU and M&Ms 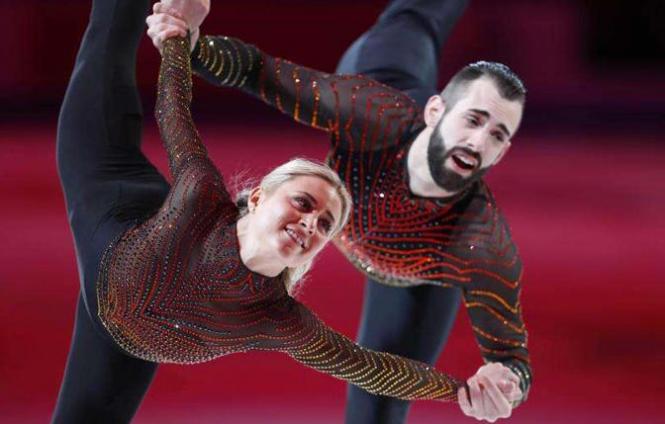 Timothy LeDuc is set to become the first openly non-binary athlete to compete at a Winter Olympics. U.S. Figure Skating announced Jan. 22, that 31-year-old LeDuc has been paired with Ashley Cain-Gribble to compete in Beijing.

"My hope is that when people see my story, it isn't focused on me and saying, 'Oh, Timothy is the first out non-binary person to achieve this level of success in sport,'" LeDuc said during a news conference January 22, according to NBC Sports.

In 2019, LeDuc became the first openly gay athlete to win gold in a U.S. pairs' event, according to the United States Olympic & Paralympic Committee.

"I stand on the shoulders of so many amazing queer athletes," said LeDuc, who, at 18, told their evangelical Christian parents that they were gay before coming out as non-binary this year.

LeDuc has faced some homophobia as an out athlete. LeDuc hopes that by taking part in their first Olympics, they can open doors for others.

"My hope is now being openly non-binary and being outspoken about this, maybe it will make a path for other non-binary and queer athletes that come into pairs in ice dance," LeDuc said in a video interview with the Thomson Reuters Foundation.

"I'm very proud of Timothy, for the journey that they've been on. I'm really proud to be their partner, and I will forever support them," said Cain-Gribble to Reuters.

The games are scheduled from February 4 to 20 in Beijing and will be aired on NBC and Peacock. 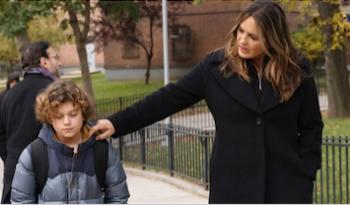 Since 2014, Olivia has been raising her adopted son Noah (Ryan Buggle), who was the birth child of a trafficked sex worker whose murder Olivia investigated. They have a very close and open relationship that is quite endearing.

On last week's episode, "Burning with Rage Forever," bisexuality and nonbinary identity were raised when Noah came out as bisexual to his mother after an intense bullying incident with his friend Hudson. It was a momentous series of scenes that put the lie to the claim that kids don't know their own identity from an early age. We certainly did.

When she went to pick Noah up from a play date, Olivia found her son in a cage with a dog collar on his neck with Hudson and his sister Annie watching. The scene, which was just as extreme as it sounds, was being recorded by Hudson who told Noah to eat dog food and bark like a dog.

On the way home, Olivia asked Noah what happened, but Noah didn't want to discuss it.

Later Olivia spoke with Hudson's mother, which she relayed to Noah who was annoyed. Noah says, "Mom, I asked you not to! Hudson's just an idiot. No one likes him anyway. He bullies everyone. It was just my turn to be his target."

Noah added, "Then I said that I was bi. And that there's no shame in being true to yourself."

He replied, "Well, it's my truth. I just hadn't told anybody before."

"Well, thank you for telling me," Olivia says.

Noah said, "No big deal. It's not like I have a boyfriend or girlfriend, it's just not fair for anybody to be left out."

SVU has a complicated history with LGBTQ characters and divested of their bisexual detective Kat Tamin (Jamie Gray Hyder) in 2021. Detective Fin Tutuola (Ice T) also has a gay son, who recurs occasionally. The series has had many LGBTQ storylines, both queer and trans, dating back years.

Watch the full episode on demand on NBC or on Peacock. Bring lots of tissues.

Jeopardy! Makes History
Amy Schneider started her run on Jeopardy! during Trans Awareness Week and she may now be the best known trans person in the U.S. due to her stellar winning streak.

Schneider, an engineering manager from Oakland, is now one of only four contestants to win over a million dollars, and is the first woman to do so. She is tied for second place in the number of games won. As of January 21, 2022, Schneider is on a 38-game winning streak.

She wrote on Twitter, "The fact is, I don't actually think about being trans all that often, and so when appearing on national television, I wanted to represent that part of my identity accurately: as important, but also relatively minor. But I also didn't want it to seem as if it was some kind of shameful secret."

According to The New York Times, in eighth grade, Schneider was voted "Most likely to appear on Jeopardy!" by her classmates.

Schneider is the first openly transgender contestant to qualify for the Tournament of Champions.

Fox Madness
It's outrage week on Fox News where they are torn between laughing at people's COVID diagnoses and being upset that M&Ms might be androgynous.

Yes, it's all parody all the time over there, where Laura Ingraham announced that Gen. Mark Milley, the chairman of the U.S. joint chiefs of staff, had tested positive for COVID-19—and applauded as she did so.

Then Tucker Carlson got riled over M&Ms changing the shoe styles of their anthropomorphized candies so that the green M&M was no longer wearing white gogo boots, but will now sport sneakers.

"M&M's will not be satisfied until every last cartoon character is deeply unappealing and totally androgynous," Carlson said shrilly. "Until the moment you wouldn't want to have a drink with any one of them. That's the goal. When you're totally turned off, we've achieved equity."

Yes, Carlson is talking about which M&M's are hot enough to have a drink with.

Carlson said, "If you look at him, the orange M&M does appear very anxious. Maybe he doesn't like all the ugly new shoes he sees around him. Maybe he liked the sexy boots."

Maybe Carlson and the orange M&M share the same kink.

Tucker Carlson fumes over candy; Bill Maher is "over" COVID

Unreal Time
The 20th season of Real Time with Bill Maher premiered on HBO Jan. 21 and it was a reminder that Maher is the poster bro for everything we dislike about cisgender hetero white dudes. Arrogant, entitled as fuck, now Maher is "bored" by COVID and thinks it's time to move on. He said of Dr. Anthony Fauci, director of the National Institute of Allergies and Infectious Diseases (NIAID) since 1984 —and one of the foremost infectious disease specialists and immunologists in the world— "Don't sit there in your white coat and tell me 'just do what we say.'"

Which is Fauci's actual job, of course. Maher said that science is often wrong.

Maher is Joe Rogan in a suit. He says that COVID is a disease of "the very old" and "people with co-morbidities" due to "lifestyle."

Maher's main crank guest was Bari Weiss, one of those conservative queers we will never understand. Like Maher, she is "done with COVID!" as she announced to applause. Weiss quit a cushy sinecure at The New York Times in 2020 because there were too many liberals there and she had no one to have lunch with.

Weiss said that "the pandemic will be remembered as a 'moral crime' for the restrictions that it imposed on people's lives."

What about the moral contract we have to be decent humans?

Weiss said, "I know that so many of my liberal and progressive friends are with me on this and they do not want to say it out loud because they are scared to be called anti-vax or to be called science deniers or to be smeared as a Trumper."

We disbelieve Weiss has liberal or progressive friends. Also, the air of insufferable privilege in asserting that we must end COVID precautions —it's a mask and a shot. Get a grip, girl— because she's "done" with COVID, makes us want to give her a good shaking of the sort the nuns used to give us.

Watch online for the full revulsion. Have these folks never heard of "the greater good?"

So for the wins, the losses and the reveals, you know you must stay tuned.

The Lavender Tube on heroes and sheroes

Preludes to a kiss: The Lavender Tube on news, and momentous smooches
Sign up!