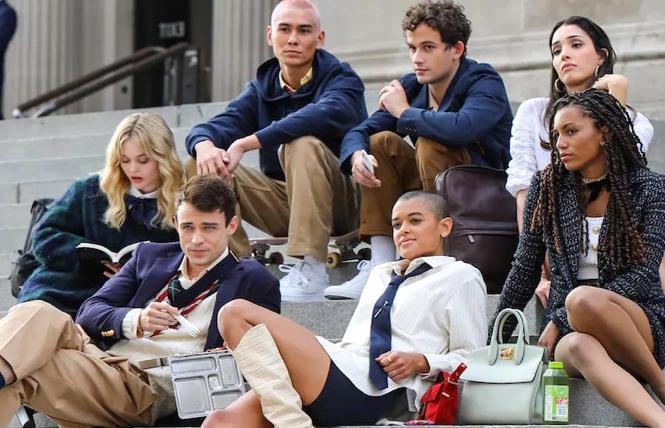 Soccer, tennis, Olympic trials; It's been a helluva sports week. Let's all agree that Matteo Berrettini, the 25-year-old, 6'5" "Hammer of Wimbledon" is adorable and hot and fortunately will be around for a long time.

Let's also agree that soccer is a bazillion percent more exciting than football and the players are sexy AF.

Let's also agree that the war on Black women athletes needs to end and that there is something seriously wrong with the World Athletics rule that has women athletes tested not just for doping, but for femaleness. 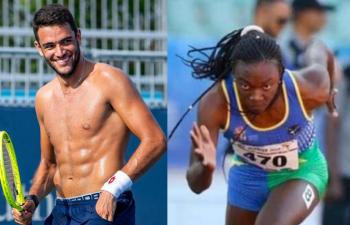 Several of the world's fastest women have been banned from their signature track events for having naturally occurring high testosterone levels. That every one of them is Black is both not surprising and utterly shocking.

According to the 2019 World Athletics rules adopted by the International Olympic Committee, women have to alter their bodies with estrogen supplements if they have high T or be disqualified from their sports, even though estrogen can be a carcinogen in artificially high doses.

Caster Semenya, Christine Mboma and Beatrice Masilingi have all been banned from their races at the Tokyo Olympics for high T. So have Francine Niyonsaba of Burundi and Margaret Wambui of Kenya, who won silver and bronze behind Semenya's gold at the 2016 Olympics.

So this is even more insidious than Sha'Carri Richardson being banned for smoking a joint. (If she'd gotten drunk instead, she'd be golden.)

This "alter your natural body or you can't run" rule is something you should know about and object to as you watch the glory that is the Tokyo Olympics. The games start July 23 with the opening ceremony, which is bound to be amazing. Watch on NBC.

Paralympics
We have really appreciated ABC World News Tonight featuring disabled athletes who will be participating in the Tokyo Paralympics. The Paralympics never get enough attention and as a former athlete, now paraplegic, we cheer the Paralympians with fervor.

ABC also featured Triathlete Chris Nikic on the July 11 broadcast. Nikic was honored with the Jimmy V Award for Perseverance at The 2021 ESPYS for being the first person with Down Syndrome to complete the 2.4-mile swim, a 112-mile bike ride and a 26.2-mile marathon run at the Ironman Florida competition.

Fat Is more than a Feminist issue
Who doesn't love Valerie Bertinelli? We grew up with her on One Day at a Time. We loved her on Hot in Cleveland. We watch her now on Valerie's Home Cooking and Kids Baking Championship (how do those kids bake better than we do?). We watch her on Today.

Bertinelli's delightful and she's been an LGBTQ ally since way before it got trendy and was part of the NoH8 campaign. In 1996 she starred in the lesbian custody battle movie Two Mothers for Zachary, based on the Sharon Bottoms case, with Vanessa Redgrave. In 1996, folks still thought you were gay if you played gay. (Two Mothers for Zachary is available on Amazon Prime.)

Bertinelli's emotional anti-fat-shaming video message on Instagram after a social media troll commented on her weight went viral last week and wow. You can watch it, and weep. She's sans make-up, been crying, yet still looks incredibly good despite that, and being 61.

Her message was clear: Don't tell people they need to lose weight, ever. Bertinelli took her pushback a step further and apologized for being part of the weight loss machine by being a spokesperson for Jenny Craig for six years.

Weight is an issue Bertinelli has been dealing with forever, as her Instagram post explained. Now she is set to star opposite Demi Lovato —who has also struggled with their weight— in a comedy for NBC, Hungry.

Bertinelli's character, Lisa, is described as a "warm, loving, self-critical and emotional mess of a woman who has lost and gained the same 30 pounds for 30 years," Lisa considers her daughter Teddy (Lovato) to be her best friend. And as a restaurant owner, "she is constantly thinking about and serving people food."

Hungry "follows friends who belong to a food-issues group as they help each other look for love, success and the perfect thing in the fridge that's going to make it all better."

Hungry is the creation of Emmy-winning writer and executive producer Suzanne Martin, known for her work on Frasier and the revival of NBC's Will & Grace. Lovato will be one of the few non-binary actors on TV. Stay tuned on this one.

Gossip, girls
You didn't even know how much you needed this, but Gossip Girl is back! And now it is super queer; for real, this time.

Kristen Bell returns as the voice of the omniscient blogger, Gossip Girl. The original series ran for six seasons from 2007 through 2016, a total of 121 episodes. The series introduced us to Blake Lively and Penn Badgley (You), won a ton of awards and we all loved it.

The HBO Max reboot is for Gen Z queers and folks who love them. The tagline from the show reads "They say two is company and three's a crowd ... But what if three's a party?"

What indeed? Max (Thomas Doherty) is the always hot and ready pansexual player. Aki (Evan Mock) has pink hair, a skateboard and a big Q over whether he likes girls, boys or both. Monet de Haan (Savannah Lee Smith) is the intimidating and powerful lesbian best friend to Julien (Jordan Alexander) and Luna (Zión Moreno).

The exclusive Constance Billard prep school is the school. Social media is the vehicle. Watch for a summer of secrets, scandal and so much more.

Unforgettable
Season 4 of the superb and award-winning PBS Mystery series Unforgotten has everything you could possibly want in a crime/thriller series now that Mare of Easttown is done till next season. DCI Cassandra "Cassie" Stuart (Nicola Walker) and DI Sunil "Sunny" Khan (Sanjeev Bhaskar) are the lead detectives in a London cold case unit. Cassie is a single mother with a father suffering from rapid-onset Alzheimer's and Sunny is a single father of two teenage girls. Their complex personal lives create conflicts that spill over into their work lives.

At the end of season 3, Cassie had a mental breakdown and went on medical leave. She had hoped to take a medical retirement, but the police department decides she must forfeit her pension —about $200,000— due to being three months short of her 30 years.

Season 4 opens with the team finding a headless corpse in a freezer in a junkyard. Piecing the who, what, where, how and why together is tantalizing, and we don't want to give away too much, but a literal wrong turn 30 years ago altered six lives forever.

Also featured this season: a lesbian couple—one of whom is a principle in the plot--about to be married, various disability issues including intellectual disabilities, and racial conflicts faced by Southeast Asian Londoners.

Season 4 of Unforgotten is incomparably good, as are the three previous seasons. Watch on PBS or on Amazon Prime or Apple iTunes.

Refreshed gay produce
Finally, if you are in need of a cool drink of gayness, Russell T. Davies (Queer as Folk, Doctor Who, Torchwood), has three interconnected LGBTQ shows from 2014 that are being re-streamed. Banana, Cucumber and Tofu delve into the lives of multi-generational gay men. There's sex, passion, love, commitment, fear. It's a lot.

Cucumber focuses on middle-aged Henry Best (Vincent Franklin) and his long-suffering partner, Lance Sullivan (Cyril Nri). Banana is focused on the younger characters —Dean Monroe (Fisayo Akinade) and Freddie Baxter (Freddie Fox) are spectacular— and the intersection between and among them.

Tofu is a documentary series that focuses on a range of sex attitudes from the POV of everyday people. Like Cucumber and Banana, the name of the series refers to the same urological scale of hardness of the male erection from a European study that inspired Davies; it starts at tofu, goes through peeled banana, and ends at cucumber

Davies gets how people make wrong choices all the time based on their desires, losses and fears. All his work is worth watching; on Amazon, Apple iTunes and Vudu. 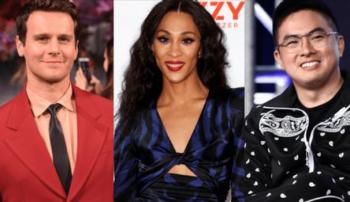 Emmy-lation
The 2021 Emmys were announced on July 13 and it was a lucky day for LGBTQ performers. Mj Rodriguez made history as the first trans performer to be nominated in a major acting category. Rodriguez is nominated in the lead drama actress category for her poignant portrayal of Blanca, the house mother we all want(ed), in the AIDS/queer/ballroom drama on FX, Pose.

Rodriguez told Variety, "I do believe this is a pivotal moment. There's never been a trans woman who has been nominated as a leading outstanding actress and I feel like that pushes the needle forward so much for now the door to be knocked down for so many people — whether they be male or trans female, gender nonconforming, LGBTQIA+, it does not matter."

Bowen Yang, the first Asian and one of only a handful of out queer comedians on Saturday Night Live, also made history with his nomination as Outstanding Supporting Actor in a Comedy Series.

And in Outstanding Supporting Actor in a Limited Series or Movie, out gay actor-singer Jonathan Groff was nominated for his role in the televised airing of the hit musical Hamilton.

The Emmy Awards will air Sunday, Sept. 19 at 8 p.m. ET/5 p.m. PT on CBS and be available to stream live and on demand on Paramount+.