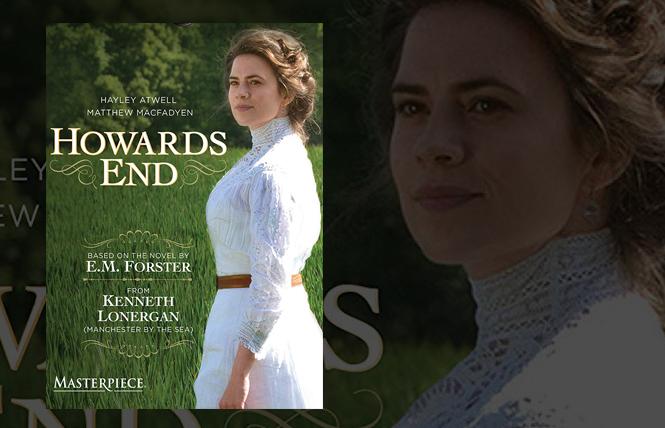 Gay author E.M. Forster in 2020 seems timelier than ever despite being dead for 50 years. His novel "Howards End," published in 1910, is the source material for the current Broadway hit play "The Inheritance," re-envisioning the characters and plot in gay 21st-century New York. "Howards End" was filmed for television in 2017 by BBC and Starz, but is now being broadcast throughout Jan.-Feb. on PBS in a four-hour limited series, streamable through mid-Feb. This version stands in the long shadow of the now-classic 1992 Merchant-Ivory film that won three Oscars, including Best Actress for Emma Thompson. But this re-imagined interpretation, deftly written by Kenneth Lonergan ("Manchester by the Sea") and directed by Hettie Macdonald ("Beautiful Thing"), acquits itself nobly, speaking to the divisiveness of our times, both in Britain and the U.S., rendering Forster almost prophetic with his now-famous line, "Only connect," as urgent today as it was in Edwardian England.

Forster's tale is the conjunction of three intertwining families: the Schegels, representing upper-middle-class, idealistic, literary-cultural-intellectual-artistic concerns; the Wilcoxes, symbolizing wealthy nouveau-riche, materialistic, commercial, pragmatic, conventional British values; and the Basts, lower-class with upwardly-mobile aspirations to better themselves, but at the mercy of forces beyond their control, often one step ahead of penury. Helen Schlegel (Philippa Coulthard, absolutely winning) has a brief romance with Paul Wilcox that abruptly ends, but it leads to her older sister Margaret (Hayley Atwell) being introduced to Ruth Wilcox (Julia Ormond, ethereally lovely), the matriarch. They become friends, and Ruth enchants Margaret with stories about her country estate Howards End. Ruth dies, leaving Howards End to Margaret, but patriarch Henry (Matthew Macfadyen) and his children ignore her request. But a romance develops between Henry and Margaret. Meanwhile, Helen becomes chummy with Leonard Bast (Joseph Quinn), a poor insurance clerk, after she accidentally swipes his umbrella during a concert. Henry, through Helen, gives poor business advice to Leonard, leading him and his wife Jacky, a former prostitute, almost to ruination. Margaret and Henry will wed. Helen confronts Henry about Leonard's plight but he is indifferent, bringing Helen and Leonard closer, all of which will lead to tragedy. Can Margaret bring the three families and classes closer together? What will happen to Howards End?

Lonergan's script cleverly introduces contemporary issues by highlighting the social and economic issues roiling England at the height of its imperialistic power prior to WWI, especially the contentious debate over women's suffrage, contrasting the liberal Schlegels with the conservative Wilcoxes. Macdonald cast people of color in key roles, especially Jacky, which subtly introduces immigrants into what kind of England will result from all this mixing of classes and nationalities. The house Howards End represents England, and who will ultimately inherit the estate asks whether these different people can share equally in the new country emerging from the slow breakdown of the class system and dissolving social barriers. This production brings a similar dilemma to Brexit England: despite all the divisiveness, can that nation come together to decide its future? With all the partisan divergence in the U.S., Forster's challenge applies equally to us.

The PBS version distinguishes itself from its 1992 counterpart by developing relationships more believable in four hours than in a 2.5-hour film. Atwell puts her own stamp on this career-defining role for Thompson by adopting a similar no-nonsense approach, but revealing the sacrifices necessary to be Henry's wife while still remaining true to her independence. As good as Antony Hopkins was as Henry, Macfadeyn is a better choice because he's not afraid to come across as boorish yet malleable in matters of the heart. Age-wise, his chemistry and marriage to Margaret are more plausible. Also, this rendition expands some of the secondary characters: the whimsical Tracey Ullman as the Schlegels' busybody Aunt Juley, and Alex Lawther as the younger Schlegel brother Tibby, a campy stand-in for Forster.

Ultimately this production of "Howards End" asks, can we reach out and develop authentic relationships to those who think differently from us? Can these social, cultural, and sexual divides be transcended? "Howards End" says, if we cannot connect, dire consequences will follow. It's a message to be heeded in 2020, amidst all our political and cultural upheavals.