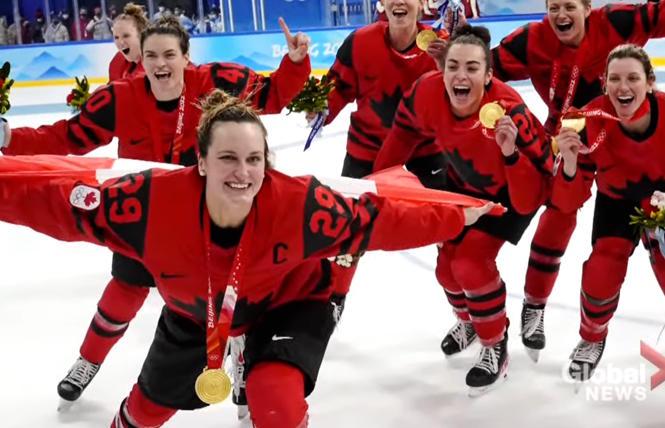 Beijing 2022 was the best Winter Olympics and the worst all at once. It was the queerest Winter games ever, with a lot of out lesbians, some out gay men, the first nonbinary competitor and queer medalists galore. But it was still in Beijing, and China has been brutal on LGBTQ people and elided news of competitors from any state coverage.

In addition, controversy over Chinese tennis phenom Peng Shuai continues. While she was seen publicly at the Olympics, she has been forced to withdraw both her rape accusation against a senior official and declare she is retiring from the sport, with no chance of outside intervention if she is never allowed to leave the country.

Nevertheless, the early international outrage over China's human rights abuses was all but forgotten after the Olympics began. And there was much excitement —and drama— to be had. It really was glorious to watch.

In some respects, queerness felt accepted and uncomplicated. Out Olympic veterans like skiier Gus Kenworthy and speedskater Brittany Bowe were at ease with their sexual identity and it was great modeling for queer kids and closeted adults. 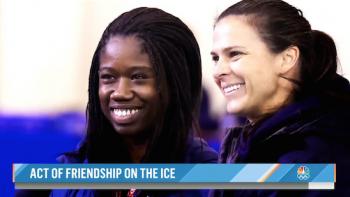 Kenworthy didn't win a medal in half-pipe on the final day of the competition in Beijing, but he spoke to media about how happy he was to compete. Kenworthy told Reuters, "Honestly, it means the world to me to get to compete here as an out proud gay man and to know that there are other out LGBTQ athletes that are here competing."

He explained that during the 2014 Sochi Olympics he was fearful of being exposed as gay. "Ultimately that Games was kind of the catalyst for me to start thinking about coming out, and kind of put the gears in motion for me to make that announcement and do that," he added.

Kenworthy continued, "I think for anybody that wants to come out but is struggling, I'd just encourage them to try and live their truth or speak their truth, even if it's just to one person. It's such a liberating experience to tell someone."

For her part, Bowe has risen to a mythic heroism for selflessly giving up her spot to Erin Jackson, risking missing the Olympics herself. Jackson —the winner of four of the past eight World Cups in the 500-meter race— slipped during her qualifying event at U.S. Olympic Speed Skating Trials in January.

Bowe, who finished first in the event, gave her spot to Jackson, even though it meant she might not get to go to Beijing. Her selflessness paid off. Bowe carried the flag at the opening ceremonies. Jackson won gold, the first Black woman to do so. Bowe herself won bronze. And the vision of true sportswomanship and leadership was on worldwide display.

Oh, Canada
Lesbian hockey players also medaled at the games, staking their claim to the sport in which so many of us found our lesbian roots in junior high. The Canadian women's hockey team continued their ongoing rivalry with team USA and won.

According to NBC Sports, "at least seven of their competing players are openly LGBTQ, making them tied for the queerest Olympic team of all time. The Dutch women's soccer team also had seven publicly out players who competed in the Tokyo Summer Games."

According to Outsports, half of the 10 women's hockey teams in Beijing include at least one out player. Outsports estimated that at least 36 openly LGBTQ athletes, from 14 different countries, competed in Beijing, double the number from the 2018 Olympics.

Sandra Naeslund won gold for Sweden in ski cross. The extraordinary Guillaume Cizeron, an out gay man, won gold with his ice dancing partner, Gabriela Papadakis, for France, in a magnificent performance.

Out gay curler Bruce Mouat and his Great Britain squad was the last queer medalist of the Beijing games on Saturday, in the final day of the Olympics. Mouat got a nod from British royalty on his win. 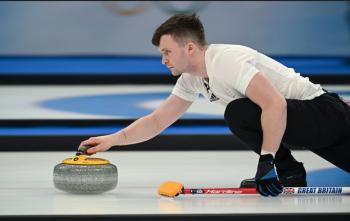 "Congratulations Team Mouat on your silver medal and bringing home Team GB's first Beijing 2022 medal," read a tweet from the Royals' official Twitter account. "You should be incredibly proud of your performance this week."

American Timothy LeDuc didn't medal in pairs skating with partner Ashley Cain-Gribble, but gave a marvelous performance and was utterly joyous as they skated their way into history as the first nonbinary Winter Olympian. Their joy was palpable and enough to make one weep (we did).

And while they are not LGBT or Q, Americans Chloe Kim, Nathan Chen, Lindsey Jacobellis, Nick Baumgartner and Kallie Humphries all won gold for Team USA.

Blight Russian
But as glorious as much of the Olympics were, a nasty drama overshadowed women's figure skating, the top-tier event of the Winter Games, and raised serious questions about why Russia was allowed to compete at all and when —or if— the International Olympic Committee (IOC) is ever going to address the abuse of young women athletes.

In 2019, Russia received a two-year ban from the World Anti-Doping Agency for its state-sponsored doping program. Between Dec. 17, 2020, and Dec. 17, 2022, no athlete can represent Russia at the Olympics, Paralympics or World Championships. The ban was originally set to last four years, but the Court of Arbitration for Sport reduced it to two years. 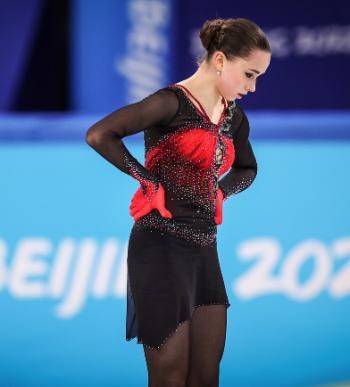 But Russia is competing under the invented name "Russian Olympic Committee" and their only punishment is not having their national anthem played and no flags on their jackets. Cue the sobbing and gnashing of teeth. And they are still doping their minor athletes, though they seem to have found a way to evade most testing.

Russia's latest victim in their disgraceful treatment of young athletes is 15-year-old Kamila Valieva, the current world record holder in women's figure skating. Set aside that a 15-year-old is the women's skating champion.

Valieva skated an extraordinary and luminous short program that netted ROC the gold for the skating team. In that program, Valieva made history by jumping quads. Commentators and former Olympic skaters Tara Lipinski and Johnny Weir, who were the sine qua non of commentary at Beijing, could not say enough about the beauty, style and athleticism of her performance.

Then days later, eleven days into the Olympics, came news that Valieva had tested positive for a banned heart medication. The test was from early December, but inexplicably —or characteristically— there was an issue with Russia getting the data to the IOC before the Olympics as required.

Suddenly everything was in flux. Valieva would not have been allowed to skate had the test results been revealed at the time. But an arbitration court said that she could continue to skate while an investigation was launched. That decision ruined the women's skating program and very well may have ruined Valieva's life.

The outrage was swift and unrelenting, with no comprehension of how the Russians operate their doping of young athletes. These are not the privileged and protected young American skaters. These are kids plucked from their families very young and made tools of the State.

A ludicrous and creepy story of spit-swapping with Grandpa was invented for Valieva to excuse the heart meds and to place the entire blame on her. That was the second part of the trauma imposed on this minor girl—after the doping itself.

On February 17, Valieva, in first place after the short program, skated the long program, which she was slated to win. But she fell twice, knocking her into fourth place and out of medal contention.

Crying hysterically after her skate, she was berated and physically shaken on camera by Eteri Tutberidze, the almost cartoonishly villainous coach now being investigated over Valieva's failed drug test.

It was repulsive to witness. It was overt child abuse so extreme that even IOC President Thomas Bach spoke out about the scene the following day, saying at a press conference, "It was chilling to see this. Rather than giving her comfort, rather than to try to help her, you could feel this chilling atmosphere, this distance."

It was ugly and inhumane and only part of the story of Russia and their young women athletes, who are on a conveyor belt to oblivion, churned out, used up and discarded. And despite Bach's shocked tone and words, the IOC is complicit in this scenario because they gave Russia the means to circumvent the ban.

Valieva is an extraordinary talent who skated exquisitely without drugs, so why dope her, ever? Now she is broken, her mental health in tatters, and all while we claim to care about the pressures on young athletes.

The IOC has soul-searching to do, and Russia needs to be banned for real until they can stop ruining sports for everyone, including their own athletes.

So for the gold and the grit, the apex and the nadir, you really must stay tuned.

Sportertainment: The Lavender Tube on LGBT athletes & allies at the Tokyo Olympics
Sign up!