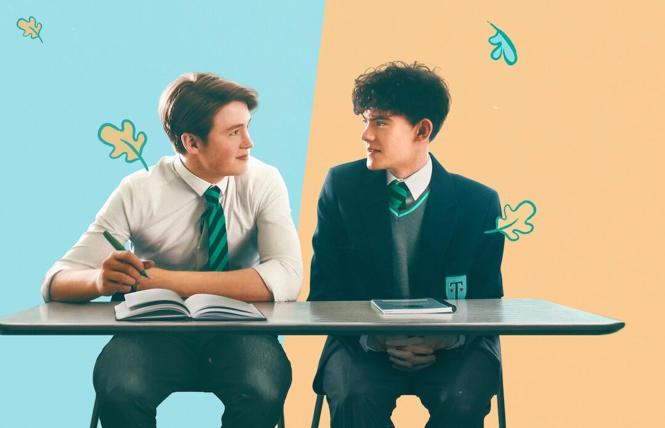 In pre-pandemic days of yore, when people worked in-person at an office, the Netflix series "Heartstopper" (eight approximately 25-minute episodes) would've been a favorite topic of water cooler conversation.

Instead, this sensational British coming-of-age series on first love, friendship, coming out, and mental health, has become the darling of social media, with almost universal critical praise from Instagram and Twitter users. It received a 100% Fresh Rating on Rotten Tomatoes.

"Heartstopper" was born as a web comic in 2016 on Tumblr and Taps, but then refashioned into four compulsively readable graphic novels (highly recommended, with plenty of material, some of it darker, for future seasons), but good luck trying to find or buy one, because they are all sold out, the publisher forced to reprint new copies.

Author Alice Oseman is also the writer, creator, and executive producer for its television adaptation. "Heartstopper" will warm your heart as you experience falling in love all over again.

Charlie Spring (Joe Locke), a student at the all-boys Truham Grammar School (England's high school) had been harassed the previous year and forced to come out under nasty circumstances. Starting a fresh term, he has a new desk-mate, Nick Nelson (Kit Connor), a rugby player, presumably straight, all-around likable guy. They get along well and Charlie is smitten with him as soon as he says hello, although he appears unlikely as potential boyfriend material.

Nick becomes fond of Charlie and as they get better acquainted, and slowly realizes he's attracted to him, forcing to ask himself some difficult fearful questions, such as the possibility he might be bisexual. 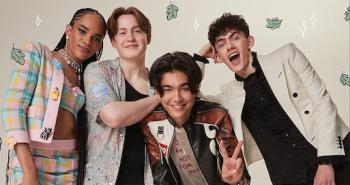 Complicating Charlie's life is his ex-boyfriend Ben Hope (Sebastian Croft), who is closeted and toxic, having refused to acknowledge Charlie in the hallways, terrified his friends might find out the truth about him. Charlie is also tormented by Harry Greene (Cormac Hyde-Corrin) with homophobic comments. He plays on the rugby team and is friendly with Nick.

Charlie has a support system including his protective best friend Tao Xu (William Gao), and their close friend Elle Argent (Yasmin Finney), a black transgender forced to change schools last year to a neighboring all-girls academy, after some cruel behavior, from both students and teachers. She befriends Tara Jones (Corinna Brown) and Darcy Olsson (Kizzy Edgell), a lesbian student couple.

Although long-time friends, Elle maybe falling in love with Tao. And Tao resents the budding friendship between Charlie and Nick. All these well-developed characters interact as they struggle with their own individual changes while maturing throughout the school year.

Authentic attraction
There are so many reasons why "Heartstopper" is so winningly fabulous. The teenagers are actually played by real teenagers, so they look and act like genuine adolescents. The sexy, cute, on-screen frisson between Charlie and Nick feels natural, their attraction authentic.

While both actors are good-looking, they're not "modelesque" gorgeous, hence audiences can relate to them. Neither Locke or Connor has come out as gay, though there are persistent social media rumors that Locke may be dating Ben/Sebastian Croft off-screen. Yet it almost doesn't matter if any of the actors are actually gay, since on the Gaydar meter they score close to 10.

What's also refreshing is that both characters exude self-assurance and vulnerability. The series beautifully balances that internal battle of desire and shame when one is examining one's sexuality. 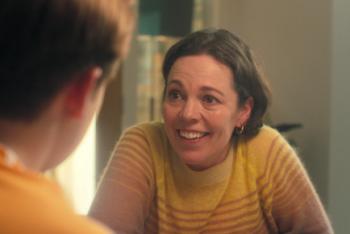 Also, the side relationships of Tara/Darcy and potentially Elle/Tao both provide welcoming counterpoints to Charlie/Nick. Overall, the series presents being queer as a joyful experience, but not underestimating the challenges of questioning the status quo.

There's even a retro 1950s ambiance with milkshakes, hugs, and classic rock'n'roll tunes suggesting a wholesomeness, with romance trumping sex (of which there is none here), yet managing not to be corny. Even the animated special effects designed to mimic the series' webcomic/graphic roots, such as pastel-colored animated falling leaves or fluttering hearts to convey a swooning romantic moment, add to the overall sweetness, whimsy, and charm of the series.

"Heartstopper" is almost entirely focused on the teens, with few adults. The ones featured are significant, even if they're primarily cameo appearances. Fisayo Akinade plays art teacher Mr. Ajayi, who is gay with a noticeable Pride pin on his lapel. He's mentor-friendly with Charlie, allowing him to eat lunch in the art classroom on days when he's being harassed by other students.

Then there's Olivia Coleman as Sarah, Nick's mother, who raises him alone and is very supportive. She only pops up in a few brief scenes in season 1's episodes. The one gripe about the series is that when you have a towering actress like Coleman, she should be used more frequently and creatively.

She's marvelous, registering a hundred emotions when Nick comes out to her, but that incident is only two minutes long, a waste of such prodigious talent. 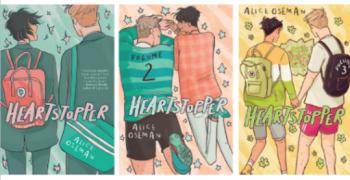 Finally, yes, that's gay actor/broadcaster/comedian/writer Stephen Fry, as the voice of Headmaster Barnes whom you hear on the loudspeaker in the mornings making snarky announcements, reminiscent of his "Jeeves and Wooster" days.

"Heartstopper" succeeds brilliantly where two years ago a very similar series, "Love, Victor," on Hulu, was seriously flawed. They both centered on sexually-questioning main characters falling in love with an openly gay friend. But here the actors were in their twenties, were unquestionably straight (scoring 0 on the Gaydar meter) and didn't act or talk like normal teenagers. The trials of Victor's mother were more captivating than the gay protagonists, both of whom felt dull, bland, lacked depth, or exhibited any sizzling chemistry between them.

"Heartstopper," in comparison to "Love, Victor," proves gay teen romances can work well if you are faithful to your source material, both in how it is convincingly told and cast.

Even for those viewers over forty for whom an openly gay high school affair of the heart would have been inconceivable, the film rings so true with its emotional honesty and relatability, that one can vicariously experience a fantasy romance by filling in a classmate crush as your own personal Nick, replacing the virtually-impossible with the it-should-have-happened.

"Heartstopper" has earned its cultural moment, securing its place, as perhaps the best gay teen romance created for television.

Here's hoping —no, insisting— that Netflix renew this delightful, delectable series for a second season.

Legacies, loss and losers: The Lavender Tube on vampires, cute teens, and the antigay AFA

Love, Victor: a watchable but wasted opportunity
Sign up!