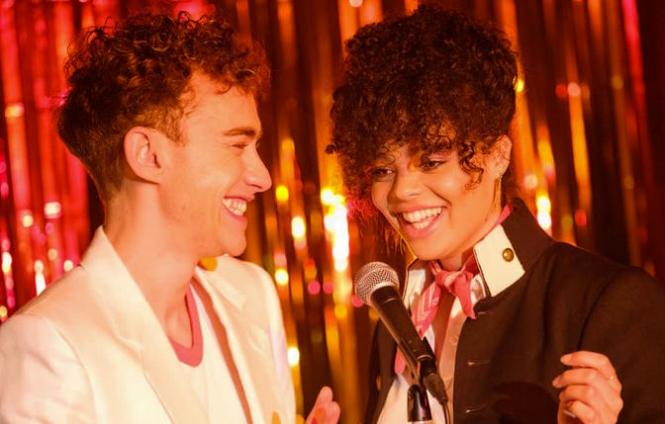 Olly Alexander and Lydia West in 'It's a Sin'  (Source:Ross Ferguson/Channel 4)

The unmet promise of 2021 is almost at an end, along with, one hopes, the perils. As we move onward to 2022 and the midterm elections, we also have two new drugs in the COVID arsenal. But while we are in a new viral surge, let's stay safe, get vaxxed and boosted, wear a good mask and watch the best TV of 2021.

You won't find Succession, Ted Lasso and Wandavision here. We recommend those series, but we are focused on the best LGBTQ shows of 2021 that made the year more bearable as we did a lot of decompressing with Netflix, Hulu, HBO Max and yes, some Apple TV and Peacock, too. 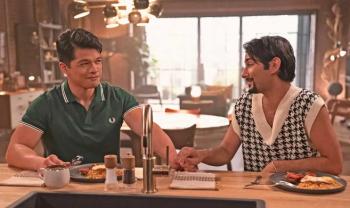 Vincent Rodriguez III and Mark Indelicato in 'With Love'

There are some new shows we also recommend that are brand new this week. Our editor, who is a sci-fi/fantasy buff, will love the dystopian Station Eleven (HBO Max). As a true crime buff, we are excited about Landscapers (HBO Max), with the extraordinary award-heavy Olivia Coleman. And as we wrote last time, With Love (Amazon Prime) is more than just holiday froth with a Latinx cast. This is a limited series about the breadth and depth of how we feel about one another and oh how we need that, right now.

We also recommend Reservation Dogs (FX) and The Sex Lives of College Girls (HBO Max) for their very different takes on what it is to be coming of age Gen Z.

The Best of 2021
Here are what we thought were the best TV series featuring LGBTQ characters in primary roles, not as tacked on adjuncts to cis-het normativity. These series made queer, trans and nonbinary characters integral to their plots. 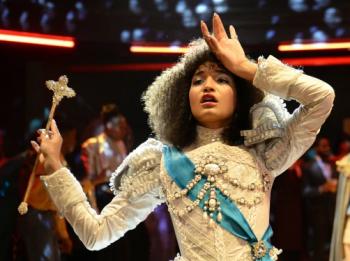 Pose
We will forever be grateful to this series for highlighting the lives of trans people and people with AIDS in ways we had never seen on screen before. We fell in love with the characters and the women and men who played them, notably Michaela Antonia Jaé Rodriguez, who, as Blanca, was the mother so many of us needed in our queer homeless youth; Billy Porter, whose Pray Tell churned up the screen with pain and pathos and resilience; and the luminous Indya Moore, whose Angel Evangelista broke our hearts again and again.

Pose is a series we will remember forever. It marked a time of great upheaval in our current LGBTQ landscape as it told stories from our collective queer, gay and trans past. It also declared more than any other series in 2021 that all Black and brown lives matter; on Netflix and FX.

It's a Sin
While Pose took many of us back to the bleak and angry days of the AIDS crisis with a compelling look inside that time with characters of color, a vantage point that had been largely hidden, It's a Sin follows several gay men in 1980s London. The men form a friend group, but the HIV/AIDS crisis in the U.K. threatens them and everyone around them. It's a Sin is a complex, funny, moving and heartbreaking look at the AIDS crisis in the U.K. and it will leave you reeling in a similar way to Pose.

Welsh show runner Russell T. Davies is best known in the U.S. for Queer as Folk. It's a Sin has all the depth and pathos and wry humor that the original British series had and the American version did not.

The acting, direction and writing in It's a Sin are stellar. Ritchie (Olly Alexander), Roscoe (Omari Douglas), Colin (Callum Scott Howells), Ash (Nathaniel Curtis), Arthur (Stephen Fry) and Henry (Neil Patrick Harris) are among the key players. Each is superb in their role, with Harris delivering one of his best performances in years.

The total range of the period is addressed, including the AIDS denialism that beset a swathe of the gay community, fed by outlier scientists and certain gay newspapers, even as people were dying every day.

Intergenerational relationships play a distinct role —both Roscoe and Colin are involved with older men— which is both true to reality and presents a looming question: Will any of these young men live to be the age of their benefactors? (See Feb 23 column.)

As with Pose, these are real and realistic characters with a plethora of foibles. But they are so believable and true to both their time and our memory of it; that you cannot look away. This is our history; tragic, survivalist and resilient; on HBO Max. 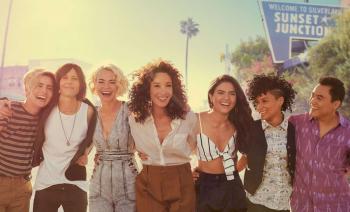 The main cast of 'The L Word: Generation Q'

The L Word: Generation Q differs from the largely white, mostly wealthy cast of its groundbreaking predecessor by adding some trans men, a whole lot of people of color, and women and trans people who don't have money. But like The L Word, Gen Q is about love and sex and work. With a cast that includes folks we loved from the original series--Bette Porter (Jennifer Beals), the hot butch, Shane McCutcheon (Kathryn Moennig) and Alice Pieszecki (Leisha Hailey).

Rosie O'Donnell, Rosanna Arquette and Griffin Dunne all have recurring roles. Arquette and O'Donnell also starred on The L Word; on Showtime. 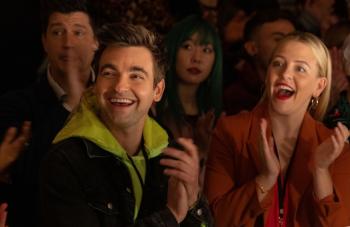 Drew Tarver and Heléne Yorke in 'The Other Two'

The Other Two
With so much drama in real life, a little lighter fare might help for our down time. The Other Two is very funny with some terrific acting and writing.

The show is about two millennial siblings, Cary (out gay actor Drew Tarver) and Brooke Dubek (Heléne Yorke) who must grapple with their younger teen brother Chase's (Case Walker) overnight fame as a viral internet sensation with his pop video as singer Chase Dreams.

Added to this volatile mix is their mother, Pat (Molly Shannon), who is as eager for fame as Chase and is "Hollywood ready."

The Other Two is just wildly funny, witty and arch and acerbic by turns. This is such a totally relatable and painfully real premise, the characters are people we know (or have been) and it's comedy that doesn't hurt anyone to make its plentiful jokes work. All of which, given the world we are living in now, is pretty good, pretty powerful stuff; on HBO Max. (See Sept. 21 column.)

Legendary
There are competition shows galore on the tube these days and all feature queer competitors, but Legendary is trés, trés gay with ballroom and voguing houses from across the U.S. competing for big bucks and legendary status. This show has it all—high drama and high camp, but also élan and so much talent. Eight diverse houses compete in nine balls. Judges include Jameela Jamil, Megan Thee Stallion, Law Roach and Leiomy Maldonado; on HBO Max. 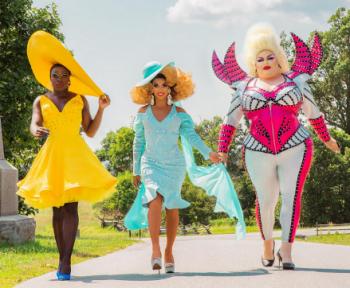 We're Here
Drag Race legends and alums Bob the Drag Queen, Shangela, and Eureka O'Hara crisscross MAGA America to meet young and older queer people in places that feel a little like purgatory if not hell and change their lives. This is big-box-of-tissues Bette Davis stuff, but OMG is it worth watching. This is one way to give the culture wars a run for their money and smooth those edges; on HBO Max. (See

ApocaLGBTQ: The Lavender Tube on dystopian dramas and scary spices
Sign up!