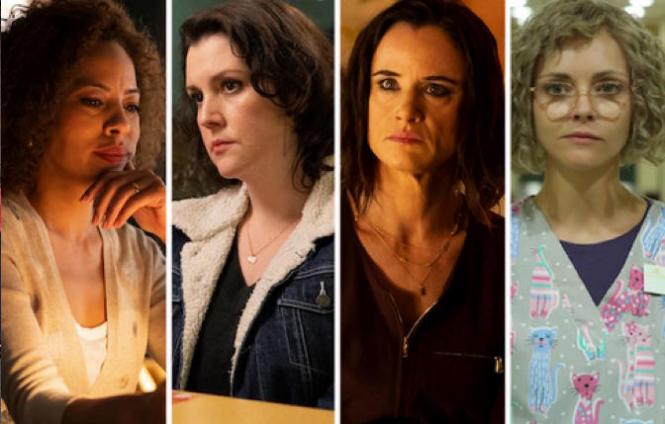 It's officially the holiday season! We got to celebrate our first Thanksgiving with our queer family since 2019 with food we learned how to make watching queer-friendly cooking shows for two years of pandemic solitude.

It was almost like old times, except for the masks and the open windows and it being 45 degrees in our living room. But it was grand to be with our friends again and laugh and over-eat and diss the GOP.

Our menorah is lit, since Hanukkah is early this year and since we are an interfaith household, our Christmas tree is up as well. We are immersed in holiday baking shows on the Food Network. These are the gayest hours on the TV landscape right now and we are here for it. We recommend the Holiday Baking Championship, the Christmas Cookie Challenge and the Holiday Gingerbread Showdown, all also on Hulu.

And of course we got that early Christmas gift of JoJo Siwa's Dancing With The Stars finale. JoJo's butch-out in the freestyle to Lady Gaga's "Born This Way" was an iconic TV moment. All over America teens of all sexual orientations were having Those Feelings over seeing hot girl-on-girl action right there in prime time on their parents' TV sets. Oh the things we would have loved to have seen on TV when we were a queer teen!

Meanwhile, Advent has barely begun, yet the naughty list is already in play with coal being ladled into a few stockings.

Soap stupid
Sad news for General Hospital fans, as we are. Steve Burton, made for a tight-fitting black T-shirt, has played sexy, hot, hunky Jason Morgan on the long-running ABC soap since 1991, when he was only 19. But tragically, Burton has come out as an anti-vax, anti-science Flat Earther. He just got fired from the show for refusing to vaccinate, per the show's policy.

Honestly, why would you throw your career away for some misguided ideology that is dangerous to you and everyone around you? Especially now, with the latest wild variant in the mix? We don't get it.

Steve Cortes, Latinx wingman for Trump, has just gotten canned from, of all places, Newsmax. Apparently even the far right has the sense to have vaccine mandates at work even though they preach their virus disinformation on air.

Cortes, who has already been exiled from CNN and Fox, said he would "not comply," the new catchy Trumpist assertion about vaccine mandate refusal like these folks are in some underground resistance.

Cortes supported all of Trump's horribly racist rhetoric about Latinx people, so pardon us if we have zero empathy for yet another bad life choice by this guy who was last seen on Twitter this week wishing Steve Bannon a "very happy birthday." Yikes.

Bad news bared
In other TV bad guy news, Kevin Spacey was ordered to pay almost $31 million to the studio behind House of Cards for violating the company's sexual harassment policy. Wow. That's as much as Bill O'Reilly was forced to pay a female co-worker at Fox in 2017 for "non-consensual sex," or as the rest of us call it, rape.

Spacey served as an executive producer of Netflix's wildly popular House of Cards and was the main character of the series from 2013 through 2017. In the sixth and final season of House of Cards, actor Anthony Rapp accused Spacey of making sexual advances toward him in 1986, when Rapp was just 14 and Spacey was 27. When Rapp spoke out, more men made allegations against Spacey, including crew members of House of Cards. Spacey was fired.

On Nov. 22, MRC, the studio that produced House of Cards, filed a petition in Los Angeles Superior Court to confirm the sum would be delivered.

We saw some folks claiming that Spacey was targeted because he was gay. Nope. He was called out by his victims for being a career predator. These men who abuse their power for decades do not deserve your empathy. Their victims do.

As we keep discovering, some men can be great actors (directors, producers, journalists, etc.) and be crap humans at the same time. We know Chinatown is pure genius, but director Roman Polanski raped a 13-year-old when he was 42 and then skipped town to live in luxury making films for 50 years while her life collapsed.

Dave Chappelle hasn't been accused of sexual predation, but he has been accused of being awful. His new special, The Closer, polarized audiences and caused a walkout at Netflix. So when Chappelle went back to his old high school, Duke Ellington School of the Arts in Washington, D.C., students gave him a drubbing.

"I'm 16 and I think you're childish, you handled it like a child," one student was reported to have told Chappelle, while others called the comedian a bigot. (www.politico.com)

Mainstream media continues to refer to Chappelle as "controversial," which is apparently a synonym for homophobic and transphobic. You can read our piece about Chappelle here.

Colton's call
Coming Out Colton drops on Netflix December 3 and you just know you have to watch. Former NFL player and The Bachelor star Colton Underwood "embarks on a journey to embrace his new life as an out member of the LGBTQ community." The reality series includes friends and mentors such as Olympian Gus Kenworthy, NFL's Michael Sam, actress Fran Drescher and country music's Cody Alan.

Coming Out Colton is Underwood's coming out story is laid out over six episodes of his journey to his authentic self and how he got from the NFL to The Bachelor to now.

Underwood came out in April in an interview on Good Morning America with Robin Roberts, herself a lesbian and former basketball star. There was mixed response to Underwood's reveal as many felt he had been duplicitous on The Bachelor about his true self.

But Underwood is no angel. He 'dated' Cassie Randolph, one of the show's contestants. In September 2020, she filed a restraining order against Underwood, alleging that he stalked her outside her Los Angeles apartment and her parents' Huntington Beach house, sent harassing text messages using an anonymous number, and installed a tracking device underneath her car. (
www.usatoday.com)

But we all come out at different stages (Roberts was 53) and Underwood explores that in this series, which is bound to raise eyebrows.

Crash landing
Nothing screams holiday spirit like a plane crash in the snow. Set your DVR now for Showtime's Yellowjackets, which is the best Lost-alike since, well, Lost. Inevitably every plane crash series gets compared to that iconic origin series, and just as inevitably, it fails.

Not, which is absolutely stellar. This plane-crash-in-the-mountains will remind you of the plane crash season of Grey's Anatomy where Arizona lost her leg and Callie almost lost Arizona and Lexie and Mark died and we all sobbed for 13 weeks.

A girl's high school soccer team flies from New Jersey to Seattle for a national tournament and then plummets into the Ontario wilderness. For 19 months —yes, the same amount of time we all were in lockdown, so don't miss that metaphor— the survivors try to survive.

It's not pretty. Assume cannibalism, tribalism and maybe tribadism. The soundtrack is pure '90s riot grrl rock; Liz Phair, PJ Harvey, Hole. The girls themselves are electric. They are ready to take on the world and ready to do whatever it takes to win.

What happens to this team of deeply interconnected alpha girls with a thirst for being number one tells us a lot of what happens when we are removed from the context of our lives. Who do we become if we are no longer ourselves?

Yellowjackets explores the confluence of all the things we have been told in popular culture about teenage girls: that young women are basically feral, just differently so from boys. This isn't Mean Girls and it isn't Lord of the Flies or even Pretty Little Liars. It's reminiscent in places of Cruel Summer (we so love that series), Dare Me and 13 Reasons. Mostly it's something entirely different—sort of the hormonal precursor to whatever it was that made Medea kill her children.

Yellowjackets takes place in 1996 —the year of the crash— and now. So the teenagers are now late-stage Millennials with a whole lot of issues stemming from that time and the trajectory their survival took. They are riven with adult fears that their teen secrets will be revealed.

The show's four principles are played as adults and teens as the show shifts back and forth between high school, the crash and now. We see what the younger versions of these adult women do to survive and whether their experience changed them for good or ill.

Shauna (Melanie Lynskey and Sophie Nélisse), Misty (Christina Ricci and Sammi Hanratty) and Natalie (Juliette Lewis and Sophie Thatcher) are differing degrees of unhappy in their adult lives. Misty was at her best in the wilderness. Shauna feels there is nothing exciting in her life with her problematic teen daughter and wandering husband. And Natalie; well, she's got some serious issues and Juliette Lewis knows how to play Serious Issues.

Taissa (Tawny Cypress and Jasmin Savoy Brown), a lesbian mom married to another woman and running for office, is the one member of the group who is settled in her life. But Natalie doesn't like that.

The layers of interaction and revelation between and among these women and girls is what makes this series so exceptional. Also, it's a taut thriller in addition to everything else. 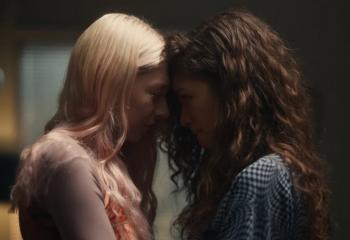 Hunter Schafer and Zendaya in 'euphoria'

Stocking Stuffers
How long have we waited for another season of HBO's fabulous euphoria? Through the entire pandemic, that's how long. Well, if the teaser trailer that just dropped is any litmus, it was worth the wait. Wow does this look spectacular. With the incredible Zendaya, Hunter Schafer, Jacob Elordi, Maud Apatow, Eric Dane and more. It returns January 9 in all its queer glory.

While you are wrapping gifts or baking or, like us, crocheting blankets for the houseless, catch up with Malfunction: The Dressing Down of Janet Jackson, a New York Times Presents documentary. It will make you angry with the NFL, Justin Timberlake and the misogynoir that Black women are faced with every day in America.

And if you missed the December 1 Christmas in Rockefeller Center, you can watch it on NBC or Hulu. It will really put you in the holiday spirit. So for all that sparkles and glitters, you know you really must stay tuned.

Comic crushes: The Lavender Tube on 'The Other Two,' 'Work in Progress' and new 'L Word'
Sign up!