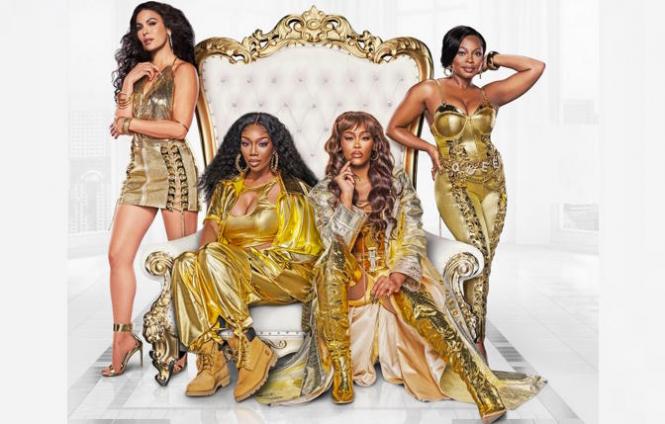 The cast of ABC's 'Queens'

Remember when we thought 2021 was going to be so much better than 2020? Then 2021 came in all extra and needy and in your face like a white nationalist parent at a school board meeting talking about how vaccines change your DNA and well, now 2021 is almost over and we're a little worried about 2022.

Thank goodness for TV. Thank all the goddesses and gods for TV that lowers our cortisol level and takes our mind off the state of the State.

We had a little moment with the Great British Bake Off. Cooking and baking shows are so soothing for us and they are the most reliably queer programming on all of TV. But when Dame Prue began an explanation stating emphatically that, "Quite often I need two holes so I can squirt," and started talking about "when you meet that little bit of resistance in the bag," well. The entire team was doubled over. See it on Twitter

Queens
Then there's Queens. The new ABC musical drama series (we still miss Smash so much!) stars Brandy, Naturi Naughton, Nadine Velazquez and Eve J. Cooper as a group of 40something hip hop queens who in 1999 were once in a hit group on the rise called Nasty Bitches. Then sh*t happened.

The show's premise is reuniting these fictional musicians (played by real musicians) to see what pops. In the opening episode, Brianna (Eve) says, "So a mom, a washed-up musician, a disgraced daytime TV host, a lesbian church lady and a young rapper fresh out of rehab are going on a world tour?"

Brianna, also known as Professor Sex and a former hip-hop sex symbol, is now a mother of five. Naomi (Brandy) also known as Xplicit Lyrics, was the musical creative in the group and she always expected to hit the charts in a solo career, but instead she's singing in locals with no customers.

Jill (Naturi Naughton) was known as Da Thrill, but was hiding in the closet because of the homophobic industry and her queer-hating religion. She has finally found love, but is it safe for her to finally come out?

Valeria (Nadine Velazquez), was Butter Pecan, the Latina of the group who joined late. Valeria hosts The Shade, a top-rated morning talk show. When a screw-up knocks her off her pedestal, she rediscovers her connections with these women who came of age with her.

The women are fabulous, the chemistry is tremendous and the music is awesome; Tuesdays on ABC, streaming on Disney+ 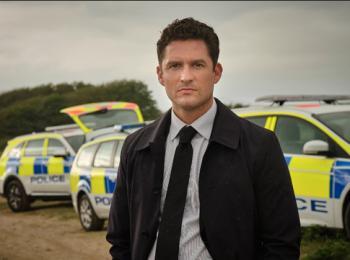 Ben Aldridge in 'The Long Call'

The Long Call
If you loved Fleabag, as we did, then you love its star, Ben Aldridge. Aldridge, 35, came out as gay on Instagram on National Coming Out Day 2020, which makes him perfect for his newest role as the first lead gay male detective in a British crime series.

Anyone who follows us on Twitter knows we spend nearly every Friday night immersed in BritCrimes on BritBox. The Long Call is a new BritBox series starring Aldridge as detective Matthew Venn.

"As [it was] the UK's first male gay detective on primetime I was resolute that we should cast a gay actor," said series director Lee Haven Jones in Pink News on his casting of Aldridge.

The Long Call TV series is based on the novel of the same name by Ann Cleeves, the first in her new Two Rivers series. Cleeves is a favorite of ours. Her Vera Stanhope novels have been dramatized as the long-running BritBox series Vera, starring Oscar-nominee Brenda Blethyn. Cleeves's Jimmy Pérez novels were made into the BritBox TV series Shetland, starring Douglas Henshall as Pérez, now in its sixth season. Both are fabulous and often feature queer story lines.

Venn, like all of Cleeves's characters, has a dark past. He and his husband Jonathan (Declan Bennett) have returned to the small Devon community that Venn left 20 years ago after being rejected by his family and their church.

That evangelical church Venn grew up in, The Brethren, turned its back on him cruelly. But when his father dies, Venn can't stay away. And the crushing history of his former life begins to be revealed. A subsequent murder puts Venn in the midst of what he does best—no matter what the repercussions.

With the brilliant Juliet Stephenson as Venn's mother Dorothy. (If you've never seen Truly, Madly, Deeply, do see it; the film and Stephenson are stunning.) The Long Call also stars out bisexual actress Pearl Mackie, well-known as Bill Potts in Doctor Who. Mackie plays Venn's colleague D.S. Jen Rafferty, who has moved to Devon from London to escape her own traumatic past.

When TV picks up a Cleeves series, actors are set for years. The audience is captivated by her atmospheric stories and dark tale-telling. It would be super if that happened with Venn and Aldridge.

Aldridge previously told ITV: "I'm delighted to be playing Matthew Venn, a brilliantly unorthodox detective who audiences will see solving a gripping and intricate case, while simultaneously surmounting a deeper, more personal mystery within himself."

Aldridge went on to call the series a "poignant and complex journey of self-discovery and sexual and religious identity, which navigates the tension between pride and shame."

Tampa Baes
Are we really watching this new Amazon docu-series set in Tampa, Florida that follows a group of hot, hip lesbians as they struggle for coolness ascendancy and most "it girl" status?

Yes we are. Don't tell us you can watch a bazillion iterations of Real Housewives and you can't watch Tampa Baes. which is The L Word meets The Real World with cute hot lesbians, queer grrls and straight ladies who say they aren't bi-curious, but there is, of course, lots of drama. 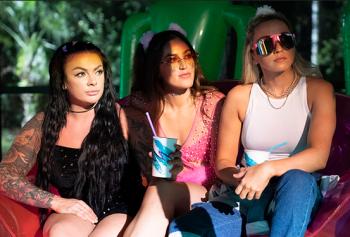 Amazon describes the series as "The young lesbian 'it-crowd' navigating and celebrating life in Tampa Bay; Florida's LGBTQ+ hub and the place to see and be seen." Viewers are told the Tampa Baes are "always ready for an adventure or a good party," but are also "ambitious and unapologetic, while constantly battling stereotypes and labels."

Okay. Is that why we are watching? No. It is not. Tampa Baes is meant to be candy and cookies on your splurge day, and it is that. This is a fun and fractious frolic. Get hooked.

There is some seriousness. Coming out queer does not go well in one bae's Latinx household. Switching partners creates real-life lesbian drama everyone will recognize. There's partying and dancing and even zip-lining. But there is also a whole lot of yearning for connection, which is at the heart of the series.

The down side is there is not much diversity. This is a 'one-size tankini suits all' series with few body differences and everyone is gorgeous. Also, in a state that is nearly 50 percent people of color, this is a very white and light-skinned people of color group. We would really have liked to see more women of size and more dark-skinned women of color. If the producers bring this back for a second season, they should check that brown paper bag test at the door.

Big Sky
We love Jesse James Keitel, the trans feminine non-binary actress in ABC's thriller Big Sky. She always pushes the envelope and her vulnerability is palpable when she is on screen. Her Big Sky character Jerrie Kennedy has had a crush on U.S. Marshall Mark Lindor (Obie-winning and Tony-nominated Omar Metwally) since last season. She finally kissed him on last week's episode and it was a moment, and possibly historic on network TV.

Mark did admit he'd been checking out Jerrie's videos of her singing performances online. So he's curious. Mark has a crush on Cassie (Kylie Bunbury), but could that kiss from Jerrie shift his attentions? 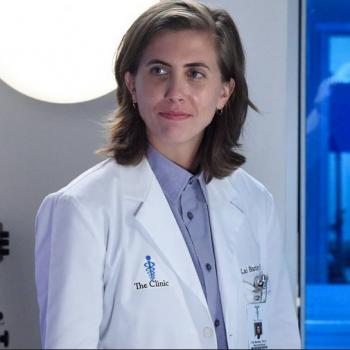 Grey's Anatomy
The pandemic made us fall out of love with hospital series, even though we have been faithful to Grey's Anatomy since it first debuted in 2005. Now in its 18th season, the series that had the longest-running lesbian couple in prime time, has had numerous queer and trans story lines and currently features a gay male couple. Now the series has introduced a non-binary character.

Sara Ramirez, who came out as queer and bisexual in 2016 and non-binary in 2020, played Dr. Callie Torres for 11 seasons. Torres was bisexual and in a lesbian marriage to Dr. Arizona Robbins (Jessica Capshaw) for a decade. Torres is the longest-running LGBT character in U.S. television history, appearing over 11 seasons and in 239 episodes.

Variety quotes ABC on Bartley's character: "They are dedicated to their craft and extremely talented at what they do. Confident as hell and able to make even the most detailed and mundane science seem exciting and cool, Kai and Amelia [Shepherd, played by Caterina Scorsone] bond over their shared love of medicine and the brain."

So when the Sturm und Drang comes knocking, you know what to do; stay tuned.