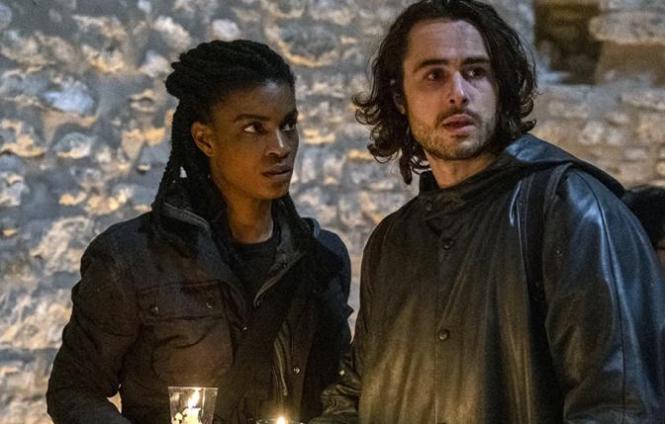 Ashley Romans and Ben Schnetzer in 'Y: The Last Man'

It's pumpkin season. Halloween looms and it's time for some scares.

Tucker Carlson provided some unnecessary horror on the tube by attacking new dad Pete Buttigieg for taking paternity leave. Said Carlson, "Pete Buttigieg has been on leave from his job since August after adopting a child," Carlson told his Fox News audience on Oct. 14. "Paternity leave, they call it, trying to figure out how to breastfeed; no word on how that went."

Buttigieg and husband Chasten adopted newborn twins via surrogacy in August. And Carlson seems never to have heard of bottle-feeding, nor diaper changing, nor that babies cry —a lot— and two babies cry twice as much. Fox News offers six weeks paternity leave for new dads.

"They give us six weeks as dads for paternity and I'm taking that six weeks," Fox & Friends co-host Todd Piro said back in March, while Fox host Jesse Watters touted being "pro-paternity" when he took six weeks after the birth of his third child. 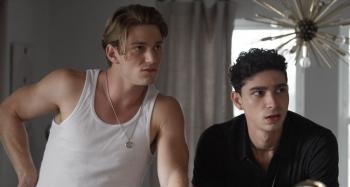 Buttigieg said attacks from "a side of the aisle that used to claim the mantle of being pro-family" were "strange" and lauded President Biden for creating "an administration that's actually pro-family."

Fox is hair-raising all year long, but some new and not-so-new series provide some Halloween-season horror—psychological, dystopian and just plain spine-tingling that are queer, queer-friendly and totally watchable.

We loved how Death Valley revisits historical alien crashes, then pivots to the present day, where a gay couple Cal (Nico Greetham) and Troy (Isaac Cole Power), along with gal pals Kendall (Kaia Gerber) and Jamie (Rachel Hilson), get abducted by aliens. But the entire series is good and filled with queer characters and actors, like the always spectacular Sarah Paulson as Tuberculosis Karen in Red Tide and Mamie Eisenhower in Death Valley. Oh yes.

Chucky
We had no idea we would love the new USA/Syfy series Chucky so much nor that its focal point is a gay teen, Jake Wheeler (Zackary Arthur, Transparent) who is bullied by everyone. Don Mancini adapted his longtime character Chucky for the small screen from his seven-film Child's Play franchise. Mancini wrote all seven films in the film series, directed the last three, and is also the creator, writer and director of the Chucky series. 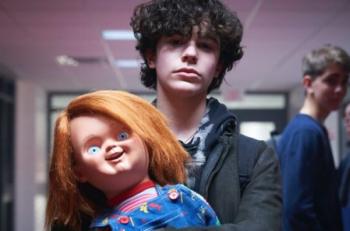 The show is described by USA/Syfy thus: "After a vintage Chucky doll turns up at a suburban yard sale, an idyllic American town is thrown into chaos as a series of horrifying murders begins to expose the town's hypocrisies and secrets. Meanwhile, the arrival of enemies and allies from Chucky's past threatens to expose the truth behind the killings, as well as the demon doll's untold origins as a seemingly ordinary child who somehow became this notorious monster."

Chucky is all the things: true grisly retributive horror (there are some violent murders, starting almost immediately with Jake's cat, Binxie, who knows that Chucky is not what he seems), as well as the very real perils of being an out gay kid in a family that hates gays and a suburban school whose pretense of enlightenment is just that—pretense.

In a 2005 interview, Mancini, now 58, said he had loved horror films like Carrie when he was younger. "The fantasy of being able to supernaturally punish your enemies is very compelling," he said. Chucky is a punisher and Jake is so deserving of an ally as he faces truly brutal homophobia at home and at school. But is Chucky really what he needs?

There are many layers to this series and the issue of bullying that threads throughout. Navigating the hellscape of high school is horror in and of itself.

With Brad Dourif as the voice of Chucky, a vicious serial killer who before dying transferred his soul into a "Good Guy" doll; the always over-the-top Jennifer Tilly as Tiffany Valentine, Chucky's former lover and partner in crime; Björgvin Arnarson as Devon Evans, Jake's crush and best friend and Alyvia Alyn Lind as Lexy Cross, Jake's nemesis and Mean Girl girlfriend of his vicious cousin, Junior (Teo Briones).

Big Sky
ABC's horror/psychological thriller/crime series Big Sky, from David E. Kelley, is back for a second season and it is even better than season one. Cassie (Kylie Bunbury) and Jenny (Katheryn Winnick) nearly died last season, and the serial killer who tried to kill them is now himself held hostage by a strange and shocking nemesis.

Added to the story is a pair of young lesbians, Max (Madelyn Kientz) and Harper (Troy Leigh-Anne Johnson), who witness a violent murder and become embroiled in a terrifying plot. 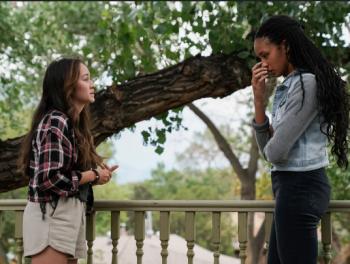 Jesse James Keitel returns as Jerrie Kennedy, a transfeminine sex worker and singer, who now works for Cassie's detective agency. (Keitel is one of the first nonbinary actors to play a nonbinary series regular on primetime television.)

Big Sky is so, so, so good. With a diverse cast, but could still use more Native American actors, given the locale.

See
The second season of See, an Apple+ dystopian thriller, just ended, but that means you can binge the entirety of the series, right?

Apple+ describes the premise of See: "In the early 21st century, a virus wiped out all but two million humans. Those surviving have lost their sense of sight."

See is situated a few centuries later. Adapting to the loss of sight, the society has learned to survive without vision. The plot revolves around what it means to have an unsighted society and the issues of sight as a metaphor. There is a group of sighted people —of course— and this leads to conflict, of which there is a lot. Like AHS and Chucky, this is pretty violent stuff. 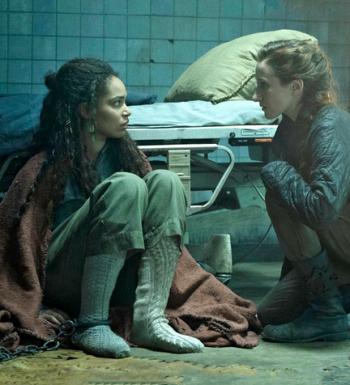 See stars Jason Momoa as Baba Voss, a fearless warrior and the leader of the Alkenny Tribe. He's the adopted father of Kofun and Haniwa, children born with the now-dormant sense of sight. The series hired a disability consultant to ensure that the issues of blindness were addressed appropriately. Read the CNET feature.

Season 2 has lesbians in the mix. Among the sighted characters, in Season 2 episode 2, Haniwa (Nesta Cooper) and Wren (Eden Epstein) have an abrupt night together before Wren helps Haniwa escape imprisonment with her father.

Y: The Last Man
A dystopian thriller with a plot premise many women may have secretly yearned for, Y: The Last Man brings us into a world without men; except one. Developed by show-runner Eliza Clark and based on the graphic novel series of the same name by Brian K. Vaughan and Pia Guerra, Y: The Last Man premiered on FX last month and is streaming on Hulu.

After a worldwide cataclysm that killed everyone with a Y chromosome instantaneously, only one man with a Y chromosome, Yorick Brown (Ben Schnetzer), is left alive. Which leads to many compelling and intriguing plot points. Yorick, son of President Jennifer Brown (the always superb Diane Lane), is guarded by Agent 355 (Ashley Romans).

There is a lot to be said about gender, sex and power in this series, which is not always successful at accomplishing that goal, but certainly strives to do so. The issue of transgender people was not addressed in the comics, but Clark raises the issue in her series. 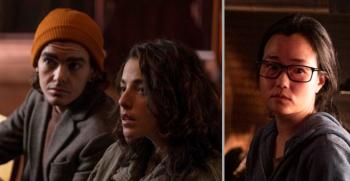 We would have liked more lesbians, more trans men, more discourse on what it means to have one surviving male on the planet. (Interestingly, the high-testosterone women the Olympics banned in Tokyo also get blitzed in this cataclysm.) But there is a lot of social intrigue. Amber Tamblyn plays Kimberly Campbell Cunningham, best-selling author of pro-male privilege titles Boy Mom: Raising Boys in a World Gone MAD and Cancel Culture and the Death of Conservative Dignity. It's a thought-provoking concept and well worth a look.

So for goblins and ghosties (check out CBS's delightful new sit-com Ghosts, a U.S remake of the U.K. show) and things that go bump in the night (the spectacularly good and utterly terrifying Evil is renewed for a third season on Paramount+), you really must stay tuned.

Dystopian directions: The Lavender Tube on 'The Handmaid's Tale,' 'Queer as Folk's reboot & more
Sign up!