Dave Chappelle, Netflix and you 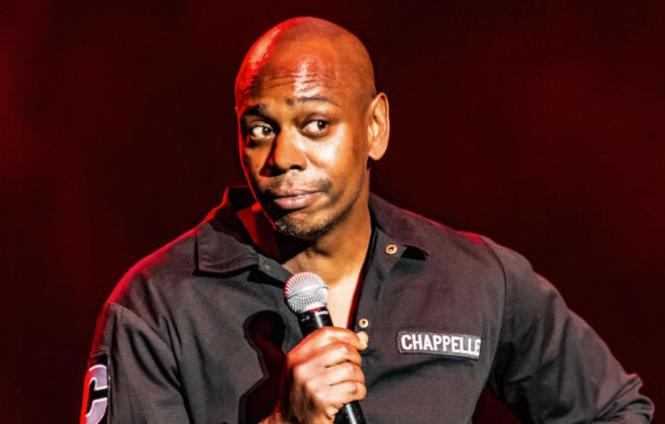 No matter what Dave Chappelle and Netflix CEO Ted Sarandos tell you, violence against LGBTQ is real and giving cover for transphobia and homophobia presents a real world threat to LGBTQ people.

In 2020 nearly four dozen trans people —mostly trans women of color— were murdered. They were young, mostly poor and had been made expendable by a transphobic and discriminatory cis-het society that devalues trans lives. Those brutal killings, which terrorize and threaten all trans and nonbinary people, went largely unnoticed in the very society responsible for the ongoing violence.

The virtual epidemic of violence against and murders of trans women of color went almost wholly unremarked by mainstream media. As I reported back in February for Philadelphia Gay News, at least 44 transgender or gender nonconforming people were killed in the U.S. in 2020, marking the deadliest year on record. At least 26 of the victims were Black, 23 of whom were Black trans women, and 10 were Latinx, nine of whom were Latina trans women.

A Media Matters analysis of 2020 broadcast and cable TV news found that networks discussed anti-trans violence for only 54 minutes across 23 segments. Less than an hour of coverage in the whole of 2020. That is only a little more than a minute per victim over the entire national news platform in the U.S. 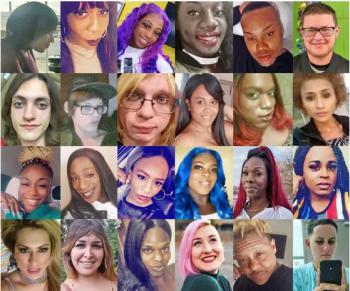 24 of the trans people killed in 2020  (Source:Philadelphia Gay News)

Epidemic of violence
In November 2019, I reported other news of threats to the LGBTQ community: The FBI released its Hate Crime Statistics report, which concluded that LGBTQ people are targeted in nearly one in five hate crimes—a statistic wildly disproportionate to their demographic. A full 19 percent of reported hate crimes (most hate crimes go unreported) were against LGBTQ, whereas their demographic is presumed to be only five percent of the population.

And as I had previously reported, murdered lesbians didn't make the news, either--even when honor killings of lesbians like Britney Cosby and Crystal Jackson occurred in major metropolises like Houston.

The global epidemic of corrective rape and murders of lesbians is an issue I've been writing about for more than a decade and a topic of my forthcoming book, Erasure.

Under the Trump administration, lesbians facing this global violence were repeatedly denied asylum, as I reported throughout Trump's tenure. Several trans women also died in detention while awaiting asylum.

These irrefutable realities of brutality against LGBTQ people slam harshly against the current controversy over comedian Dave Chappelle's Netflix special, The Closer, which has significant homophobic and transphobic content.

Such content isn't new to Chappelle. He has been openly homophobic and transphobic (and misogynistic) before and gotten a pass outside the LGBTQ community. In his 2020 Netflix special, Sticks and Stones, Chappelle attacked queer and trans activists and the #MeToo movement. He was supportive of rapist R. Kelly, sexual abuser Louis C.K. (accused of multiple assaults on female comedians, including lesbian comedian Tig Notaro) and homophobe Kevin Hart.

Chappelle also attacked the men who accused Michael Jackson of child sex abuse in the HBO documentary Leaving Neverland. "I know more than half the people in this room have been molested in their lives, but it wasn't no goddamn Michael Jackson, was it?" Chappelle joked. "This kid got his dick sucked by the king of pop. All we get is awkward Thanksgivings for the rest of our lives." 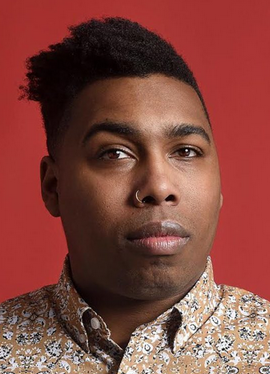 'Alphabet people'
In that special Chappelle commented on each letter of what he calls "the alphabet people," noting that bisexuals are "gross" and trans people "confusing." He also uses the F word in a bit about former Empire star Jussie Smollett.

Chappelle has also made vile jokes about gender reassignment surgery and complained about "missing Bruce Jenner." And he repeatedly minces in his approximations of gay men, all of whom are preening queens in his repertoire. With regard to same sex marriage he says that among gay men, "whichever one of you is gayer, is the wife."

Chappelle got another special after all of this, so how upset was anyone, really? This isn't new material. In fact, that is the criticism those who were fans of Chappelle's cutting edge show on Comedy Central have voiced repeatedly: If you can't tell the difference between 1980s stand-up and 2021 stand-up, something is wrong with the comedian, not the audience.

In the real world, the LGBTQ community is divergent and diverse and is not the dominant threat to society that Chappelle's commentary suggests. Some of Chappelle's jokes sound like Fox News bits straight out of Tucker Carlson or Sean Hannity.

A lot has been written already about Chappelle's latest foray; his "edgy" comedy, his discomfiting commentary and his latest blatant homophobia and transphobia. Black gay poet and essayist Saeed Jones wrote a gutting piece for GQ titled simply "Dave Chappelle's Betrayal." It will make you weep.

It will also obviate the need for you to watch The Closer if you don't want to, as Jones details some of the egregious homophobia and transphobia in the special. His seeming support for Black-on-Asian violence has gotten zero media attention, although anti-Asian themes have appeared in other Chappelle specials. 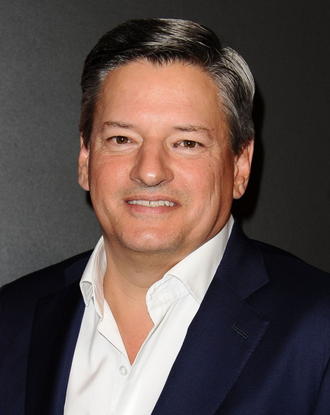 Ted 'talks'
Whether you are a Chappelle aficianado or not, the misrepresentation and dismissal of real world violence against queer and trans people by Netflix Co-CEO Ted Sarandos is as grotesque and dangerous as any of the "jokes" in The Closer. Also at issue is the seeming campaign against LGBTQ employees at Netflix who voiced objections to The Closer, with several having been suspended.

In an email to all Netflix staff, Sarandos addressed upset among LGBTQ staff and others in the company over Chappelle and said, "With 'The Closer,' we understand that the concern is not about offensive-to-some content but titles which could increase real world harm (such as further marginalizing already marginalized groups, hate, violence etc.)"

Then Sarandos made the inexplicable and unsupportable assertion that "While some employees disagree, we have a strong belief that content on screen doesn't directly translate to real-world harm." Read Sarandos' entire email here.

Sarandos said, "The strongest evidence to support this is that violence on screens has grown hugely over the last thirty years, especially with first-party shooter games, and yet violent crime has fallen significantly in many countries. Adults can watch violence, assault and abuse —or enjoy shocking stand-up comedy— without it causing them to harm others."

GLAAD told Variety that the organization was "founded 36 years ago because media representation has consequences for LGBTQ people. Authentic media stories about LGBTQ lives have been cited as directly responsible for increasing public support for issues like marriage equality. But film and TV have also been filled with stereotypes and misinformation about us for decades, leading to real world harm, especially for trans people and LGBTQ people of color. Ironically, the documentary Disclosure on Netflix demonstrates this quite clearly." 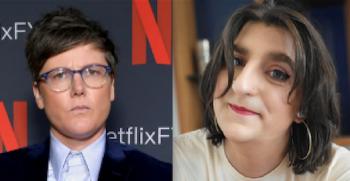 Netflix departures
I have reviewed many original series and films on Netflix here that have queer and trans content and which were superb, including Disclosure, Clickbait, Trinkets, Midnight Mass and more. It's a highly diverse platform that gives access to a wide range of films and series that LGBTQ people want to see, like out lesbian Hannah Gadsby's extraordinary stand-up specials.

But Gadsby called out Sarandos in the New York Times and on Twitter.

And Dear White People show-runner and out trans woman Jaclyn Moore, currently working on the reboot of Queer as Folk, has cut ties with Netflix. In a series of tweets, Moore said that she had been "thrown against walls" for being trans and that she was "done" with Netflix because of their association with Chappelle's "blatant transphobia."

Some have chosen to call this debate censorship, and because Chappelle is at the locus, racist. But those statistics on anti-LGBTQ violence are the res ipsa loquitur response to that argument. The bottom line is, do trans and queer lives take precedence over painfully abusive and assaultive comedy?

If you can't make jokes without punching down at the most vulnerable in society, how are you funny rather than just another purveyor of hate speech in an increasingly divisive and threatening world?

Chris Kelly: 'The Other Two' co-creator on finding truth through gay comedy

Out in the Bay: Drag Racer Rock M. Sakura seeks superpower and responds to anti-Asian violence
Sign up!