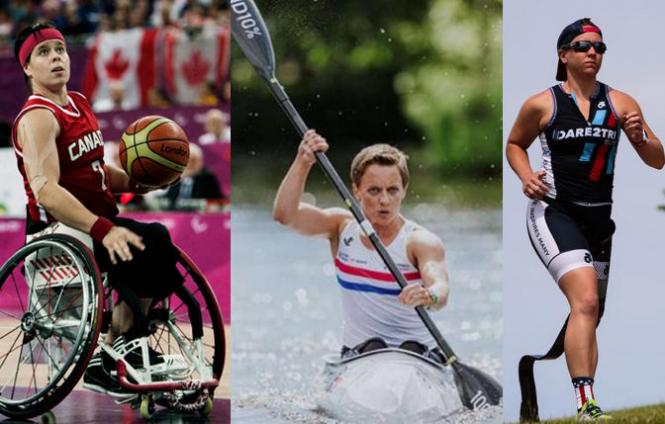 The Tokyo 2020 Paralympic Games (delayed a year) began August 24 and run through September 5. We have been a long-time disability rights activist and the fifth anniversary of our becoming paraplegic is August 26, so these Paralympics have special resonance for us.

These Paralympics boast more out LGBTQ athletes (23) than the dozen who participated in Rio in 2016; an historic number. As with the Olympics, the women far outnumber the men. There are 20 out LGBTQ women and one out gay man, Lee Pearson. There are also at least three non-binary or gender-neutral athletes: Australian track and field athletes Robyn Lambird and Maria "Maz" Strong and American rower Laura Goodkind.

GLAAD, the LGBTQ media advocacy organization, is highlighting the participation of these athletes and the inclusivity of these Paralympics as well as the intersection of queerness/transness and disability.

Rich Ferraro, chief communications officer at GLAAD said in a statement to the Bay Area Reporer, "The Paralympics by nature are a celebration of inclusion and equality, and the historic number of out LGBTQ athletes participating this year is something to celebrate."

Ferraro continued, "LGBTQ people are more likely to live with disabilities and to face systemic discrimination on both fronts; the visibility brought by the Paralympics and its talented athletes helps fight that stigma. Every athlete, regardless of ability, gender, race, or sexual orientation, deserves a chance to participate in sports and to represent their communities with pride."

Lauren Appelbaum, Vice President for Entertainment and News Media & Communications at RespectAbility, which partnered with GLAAD on reaching out to media about these interconnected issues said in a statement, "There is a large intersection between the LGBTQ community and the disability community, and the increased representation at this year's Paralympic Games reflects that. We hope that even more out athletes participate in the future, as it is critical for all disabled people to have positive role models for success."

The Paralympics are the largest sporting event in the world for people with disabilities, and a total of 540 events across 22 sports are included this year, with badminton and Taekwondo making their Paralympics debut. More than 3,500 athletes from at least 134 nations will compete. There is also a Refugee Paralympic Team comprised of refugees who have fled war or human rights abuses in their home nations. 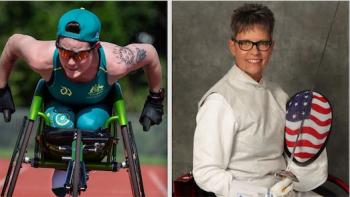 The first Paralympics were held in 1960, with 400 athletes from 23 countries competing in Rome. Like the Olympics, they now take place every four years, with separate winter and summer Paraympics each hosting a closing and opening ceremony.

The Paralympics were created to allow athletes with disabilities to strive for and reach the pinnacle of athletic excellence. Eligible disabilities are broken down into ten main categories: impaired muscle power, impaired passive range of movement, limb deficiency, leg length difference, short stature, hypertonia, ataxia, athetosis, vision impairment and intellectual impairment. From there, classifications continue and vary by sport.

Research done in 2019 by the Movement Advancement Project (MAP) and the Center for American Progress estimated that nearly five million LGBTQ people live with one or more disabilities. For trans people the numbers are higher: while one in four adults (including those who identify as LGB) in the U.S. have a disability, two in five trans adults identify as disabled. Further research done by UCLA via the California Health Interview Survey shows that trans people "are significantly more likely to report having a disability due to a physical, mental or emotional condition."

Stigma, biases and discrimination also link disabled and LGBTQ people while disabled LGBTQ people face dual oppressions. GLAAD asserts that "people living with non-visible disabilities, such as mental health conditions, learning disabilities, or physical conditions that are not immediately apparent, often have to weigh the benefits of 'coming out' against the possible drawbacks of making their disability known."

The Tokyo Paralympics will be aired on NBC, NBCSN and the Olympic Channel or streaming at www.NBCOlympics.com and the NBC Sports app.

Americanus Horribilus
Oh, is this season going to be scary fabulous! Set in the queer mecca of Provincetown and in the desert, American Horror Story: Double Feature —cue the opening song from Rocky Horror Picture Show— will be divided into two parts: Red Tide, which takes place "by the sea" in six episodes, and Death Valley, which takes place "by the sand" in four episodes. 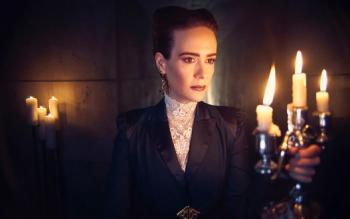 If this description gives you apocalyptic shivers (red tides are mysterious deadly killer algae and Death Valley is the hottest place on Earth) throw in some disembodied limbs, a very bloodied Sarah Paulson by the ocean and some mythical sirens and it's gonna be lit.

Finn Wittrock plays Harry Gardener, a struggling writer who moves to Provincetown with his wife Doris (Lily Rabe) and daughter, but soon encounters two mysterious locals Austin (Evan Peters) and Belle Noir (the always extraordinary Frances Conroy). Austin and Belle tell Harry this is a great place to write, but what exactly is Harry writing?

Academia Drama-Commedia
Sandra Oh said in an interview about her new Netflix series The Chair, which dropped on August 20, "What Asian Americans have felt has been missing is a fullness of character and a fullness of self." 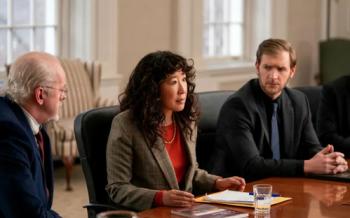 Sandra Oh (center) in 'The Chair'

Oh was also the first actress of Asian descent to be nominated for the Primetime Emmy Award for Outstanding Lead Actress in a Drama Series and the first Asian woman to win two Golden Globes.

This comedy/drama was created by Amanda Peet and Annie Julia Wyman and addresses the complexities of power, race and gender dynamics in academia. The Chair also stars out lesbian actress Holland Taylor, Bob Balaban, David Morse and Jay Duplass.

Jeopardized!
Finally, we wrote here weeks ago about Mike Richards' long history of misogyny, sexual harassment and gender discrimination in TV game shows. ABC/Disney made an unforced error in choosing him to host the beloved game show Jeopardy! So when he was forced to withdraw after still more gross comments about women were revealed we were disgusted, but unsurprised.

We told you. As Dictionary.com trolled him on August 20: "'Jeopardy' is a noun meaning 'peril or danger.' Here it is in a sentence: 'My job is in jeopardy because of my past comments.'"

And scene. For the spectacular, scary and sublime, you know you really must, stay tuned.

Finish lines: The Lavender Tube on Motherland: Fort Salem, Britney and sporty comings out
Sign up!