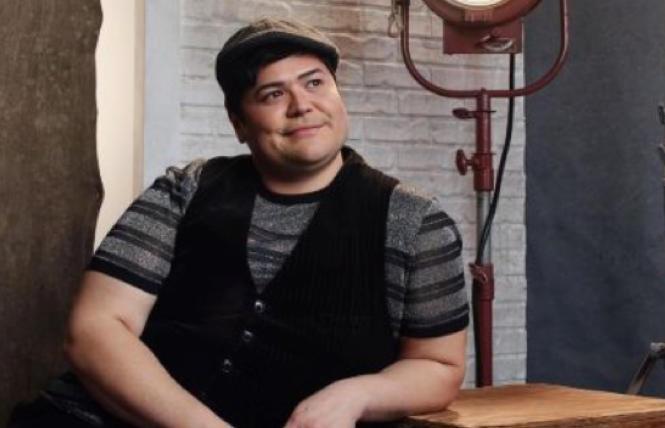 You hopefully know Harvey Guillén from the acclaimed FX comedy series What We Do in the Shadows as Guillermo, the servile human in a house of wacky vampires.

You possibly caught his earnest portrayal as George in the music and dance-infused Zoey's Extraordinary Playlist. He also costars in the new horror comedy Werewolves Within.

"It's such a treat to play this character," said Guillén in a phone interview. "The writers made it smart, so parents can watch it with their kids. Adults who watch the show think it's very clever." 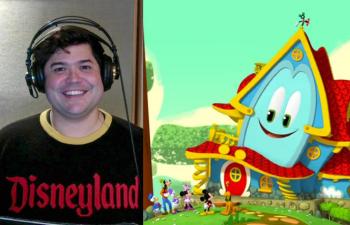 Of his newest role, Guillén said, "I've always wanted to be a part of the Disney Animation family. Everyone knows Mickey, Minnie, Pluto and all the gang. To add to that was such an honor. To be included in this iconic group was better than I could imagine."

Guillén grew up watching Disney features like Pinocchio and Peter Pan, "also Disney classics like Pollyanna with Hayley Mills, and The Parent Trap," he said. "When people say they like The Parent Trap, I ask, 'Wait; which one?' For years, I thought Mills' British accent was a Boston accent. As a kid, I would mimic her speech, thinking, 'I'm from Boston.'"

Actually born in California's Orange County, the 31-year-old out gay actor (and writer and producer), has been working in film and TV since 2008. He's become a favorite among fans of diverse representation, as he's been quoted as being "Brown, round and proud," but also simply for his acting skills.

Like much voiceover work, especially in the midst of the pandemic, Guillén recorded his parts without other actors. He previously had a voiceover role in the Disney animated series The Owl House, which led to his second role as Funny the House.

"Most of the time, it was just me in a studio with the producers and director," said Guillén. "If it wasn't the year that it was, there would have been more interaction."

With his unusual new character —an anthropomorphic house that can change its shape at the drop of a shutter— Guillén brings a depth one might not expect from a cartoon.

"I really wanted to find the right voice," he said. "Funny is a house. What do we think of when we think of home? I wanted to create a voice for Funny that would make you feel welcome, that fun could be had. I found a higher vocal register, a laugh that eases tension. If, in an episode, the characters are having a bad day, they need a friend who's looking out for them. I see Funny as a big brother who helps this already established group of friends explore their creativity and imagination. We don't know what tomorrow brings in this crazy world, but you still have your imagination."

Guillén mentioned colleagues who have adjusted to the pandemic by doing voiceover roles, creating podcasts, and making other socially-distanced work. He even participated in a traditional radio mystery podcast.

"People will persevere," he said. "We will always find a way to create entertainment, even in a crisis. We can still make art and share it."

Tech time
Along with several years of guest-star and recurring roles on TV shows (Don't Look Deeper, The Magicians, The Thundermans, and his first major role in Huge) as well as films, Guillén also made a recent splash as the endearing yet tech-inept George on the San Francisco-set Zoey's Extraordinary Playlist. While NBC cancelled the show after two seasons, online service Roku stepped up to back a two-hour wrap-up finale. 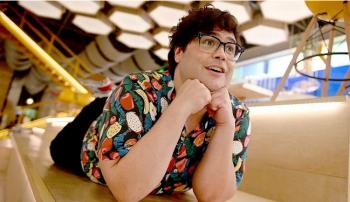 Spoiler alert: on the show second season, George is hired, but soon afterward gets dismissed by Zoey (Jane Levy), his boss. His dramatic exit, sung and danced to his version of Britney Spears' "Stronger," amused fans.

"George was a lovely character to play," said Guillén. "Unfortunately, he may have lied in his resumé. But he made up for it in his personality. Sometimes, as with George —or Guillermo— we think the job we want is best for us, or the job you think will make you the happiest is not for you."

Shadow dancing
In contrast to the carefully-scripted Disney show, Guillén's work on What We Do in the Shadows involved more improvisational and creative performing.

"The creators of the show, Taika Waititi and Jemaine Clement, thrive on that," said Guillén, who noted that the out-of-order shooting wasn't always for convenience or the show's budget.

"They like to keep us on our toes," he added. "Sometimes it's more organic when the actors aren't told the outcome of a scene. For my character, Season One was shot out of order. Sometimes, in the morning, we'd be shooting the first episode, and by lunch we'd be on episode eight. By dinner time we'd be on episode four."

"I'd be in a car, wondering how Guillermo got a car, and be told, 'You're really frantic.' I'd ask why, and they'd say, 'Well, we can't tell you.' 'But why is the car covered with blood?'

The element of surprise only adds to the mockumentary style of the series, spun off from Waititi and Clement's New Zealand-based short and feature films. 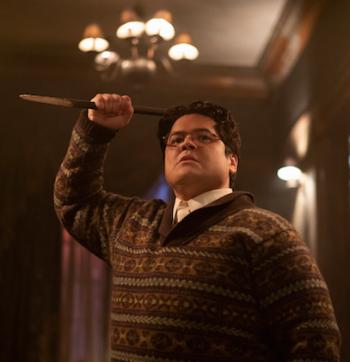 Harvey Guillén as Guillermo in 'What We Do in the Shadows'

"When you see Guillermo's face and he's terrified every second, it's kind of real," said Guillén. "We know what's going to happen in a scene, but sometimes an actor will go a bit further. So the final version you see may be half scripted and half improvised."

The third season of What We Do in the Shadows will premiere September 2.

"I always consider Guillermo to be on a sort of tightrope, because you don't know if he's gay, because he doesn't know if he's in love with Nandor," Guillén noted. "And while I don't say it verbally as Guillermo, I've often said that the characters in the show are all queer. What part of the acronym they fall into in this queer world? Well, that has yet to be determined. But they're all queer. We've seen Lazlo talk about being with another male vampire; Nandor mentions being in multiple relationships with women and men. There are all different sorts of elements. The only one who isn't specific is Guillermo, because he's human."

And thus the beguiling conundrum in the show, plus another important hereditary aspect of Guillermo, adds depth to the otherwise witty series. For Guillén, it adds a layer of character development that expands beyond the main story.

"There's no expiration date when to come out," he said. "We've all been in that place where we're not comfortable coming out yet. Either we have too much to lose or don't have support, whether it's from our family or selected family, to feel the strength to do that. We see that with a lot of our queer brothers and sisters around the world."

As for Guillén's adorably awkward character (whose arc takes a dramatic turn in the season two finale), "We're all waiting for his journey to begin."