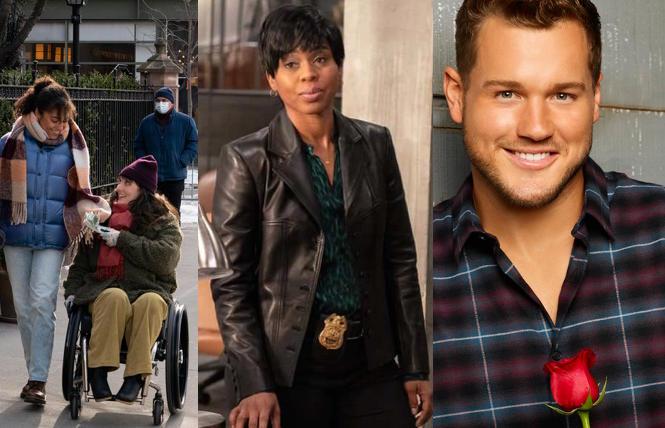 Horribly and tragically, high-profile police killings are in the headlines again, prompting new rounds of protests. Calls to defund the police are coming from the streets, from Vice President Kamala Harris's niece, Meena Harris, and even from members of Congress, like progressive Michigan Democrat Rep. Rashida Tlaib.

Various forms of police and detective procedurals are the top-ranked series on TV and streaming services. How does that align with what is happening out in the real world to Black and brown, LGBTQ and disabled people—the primary targets of nearly all police violence?

The April 15 episode addressed police violence and the culpability of individual officers—including management, like Captian Olivia Benson (Mariska Hargitay). The deep roots of racism and concomitant discrimination by police against Black and brown people were highlighted, including how when women and girls of color go missing, there is no mass mobilization to find them, as there is for white women and girls.

When the sister of a prominent Black activist goes missing, it's revealed that the missing young woman, Sara Harper (Victoria Janicki) and her disabled white partner, Alicia Ford (Jessy Yates), were kidnapped by white supremacists. The men force them to have sex for the camera, and then post the video online.

Alicia and her wheelchair are shoved out of the van and while the men take Sara to a hidden locale and auction her online to the highest bidder for rape and torture.

Deeply disturbing on myriad levels, this episode is also hyper-realistic: every day in America vulnerable women are abducted and sex trafficked. The depravity and violence of white nationalists was illumined starkly on January 6—what happens in this episode is thoroughly believable.

She has served on the NYC Mayor's Office of People with Disabilities Youth Council and acted as an ambassador to The Cerebral Palsy Foundation. In an interview with the New York Observer, Yates said, "It's all about representation, and I just want to be able to see myself on television. I grew up never having seen a disabled woman in media."

Representation matters. Alicia and Sara's relationship was presented as normative in all its elements: queer, disabled/non-disabled, racially mixed. Each woman was talented: Alicia a singer (Yates has a terrific voice) and Sara a documentary filmmaker. The biggest taboo that keeps Sara from revealing their relationship to her family is Alicia's whiteness—not that she is female or disabled.

This is an episode you want to see, even if you don't watch the series. It is just layers of powerful in this volatile time we are witness to and reminds the viewer that we have yet to scratch the surface of the work that needs to be done to approach equity for those of us who have been marginalized historically and victimized simply for who we are—or who we are not.

For years we have said in this space that when we are behind the camera our people are in front of the camera. Ilene Chaiken, known for her iconic series The L Word and her work on the queer-ish Empire, became the show runner for Law & Order: Organized Crime in December after a series of controversial exits from the series while it was in development.

What a smart move by creator Dick Wolf, who has never had a female show runner in the 32-year run of the Law & Order franchise, which is one of the most successful TV series in history.

Chaiken has kicked everything up a notch in this atmospheric series that pivots easily and often from sleek to gritty. The April 15 episode opened with Sgt. Ayanna Bell (Danielle Moné Truitt) in bed with her wife, Denise (Keren Dukes).

The naturalness of their coupling, from their pillow talk to Ayanna kissing her pregnant wife's stomach and speaking to their unborn child, was breathtakingly real.

Bell is a powerful character. She's the squad supervisor of the Organized Crime division and is both boss to Elliot Stabler (Chris Meloni) and his partner. Truitt handles the role with élan and the command demanded of, as she notes, someone who checks the boxes of "Black, female and gay" where there is no room for error.

Bell plays against Stabler's rogue detective work by being in control and in charge. She gives him some leash, but not too much. But her wife is wary of Stabler's propensity for violence and going off the rails. He is, Denise reminds Ayanna, a man who has been deeply wounded and who is also on a mission to take down the people who killed his wife.

Organized Crime is so vastly different and in many ways vastly superior to the rest of the franchise, that if it were not for crossover characters like SVU's Olivia Benson (Mariska Hargitay), Stabler's former partner of a dozen years, it might feel like a stand-alone streaming series on Netflix or Hulu. It reads as interior and desolate and the inter-connectedness of the characters creates a dramatic tension that is nuanced and deeply affecting.

This show also has more people of color than any other of the Law & Order franchise or than Wolf's Chicago PD and Chicago Fire. And more queers, as there are two other secondary queer characters. That is clearly down to Chaiken, who is also writer and executive producer for the series.

Organized Crime is good—very good. Is it Ozark or Boardwalk Empire good? Could be. But it is definitively the best acting of some of the principals' —Meloni and Dylan McDermott— careers. And well worth your time.

The Bachelor Comes Out
For years we have been saying some of the bachelors on the long-running, 25 season reality series seem gay. Now Colton Underwood, star of the 23rd season as well as a contestant on the 14th season of The Bachelorette and season 5 of Bachelor in Paradise, has come out, in a provocative interview with out lesbian Good Morning America anchor Robin Roberts. Watch it on ABC.com. It's something.

When handsome men in their late 20s say they are virgins, we want to know why. Especially a guy who was in the NFL in the Oakland Raiders and the San Diego Chargers. The Bachelor sold Underwood's virginity like it wasn't suspect in someone who was not a professed asexual, but was just trying hard to suppress his sexual desires.

We get that it takes time to come to terms with sexual orientation. But that was a lot of women to play games with in public every week over three different series. Which highlights another peril of the closet; people other than the closetee get hurt. And outside of those series, Underwood dated some high-profile women, including Olympian Aly Raisman.

On April 14, Variety revealed Underwood is filming a Netflix reality show about his coming out in which gay Olympian Gus Kenworthy will appear. Interesting.

Finally, in shows you should be watching, ABC's Big Sky has big female, queer and trans presence. Paris Barclay recommends ABC's new series, Rebel, which is enough of a recommendation for us, Grey's Anatomy is taking on police violence while Amazon's them is Get Out meets Lovecraft Country meets Little Fires Everywhere. Who doesn't want to see that mash-up? And if you still haven't binged It's a Sin after we told you all about its greatness, you must.

So for the Sturm und Drang, you know you really must stay tuned.

Space, grace, erased: The Lavender Tube on 'Pose,' 'For All Mankind' & trans erasure in news
Sign up!