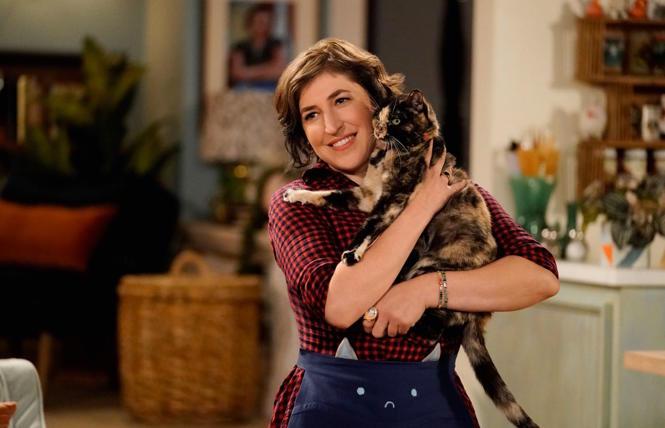 Mayim Bialik with a feline costar in 'Call My Kat'

When it comes to recognizing and embracing promising talent, the gays have been at it longer than practically everyone else. Remember the Bette Midler/Barbara Hershey movie Beaches? Remember the opening sequence with the lead characters as children? That was a young Mayim Bialik in one of her earliest film roles, playing Midler's C.C. Bloom as a kid. Ask any of us and we'll tell you we knew she was going to be a star.

Since then, Bialik has had her own hit network sitcom in the 1990s as the titular Blossom and stole the show in every scene in which she appeared in the even more successful 21st-century sitcom The Big Bang Theory as Amy Farrah Fowler. She also managed to find the time to earn a PhD in neuroscience from UCLA.

In Call Me Kat, her first sitcom following the end of the long-running Big Bang Theory, Bialik plays Kat, the single and sassy owner of a Louisville cat café. I had the pleasure of speaking with Bialik in January 2021, shortly after the show debuted on Fox.

Gregg Shapiro: Before signing on to do Call Me Kat, would you consider yourself a fan of Miranda Hart's British sitcom Miranda, on which it's based?
Mayim Bialik: Honestly, I hadn't seen it until Jim Parsons brought it to my attention towards the end of Big Bang Theory. So, I did not know about it until Jim said, "What do you think of this?" And I said, "I think it's delightful." He said, "No, I'm not asking your personal opinion; I'm asking for you to be part of it." [Laughs], that was really the first that I heard of it. That's how we got here [laughs].

One of the first things the viewer sees in Call Me Kat is the breaking down of the fourth wall. Can you please say something about working in that mode?
I think a lot of people don't understand that we are literally motivated by our desire to honor the original Miranda for all the good that it has brought us. I was on Blossom when I was a teenager, and Blossom actually kept a video diary, so I'm used to talking at the camera [laughs], to be honest.

When we decided to keep that piece of Miranda, it seemed to make a lot of sense that this character is a woman who is not necessarily lonely, but she is alone a lot. In that sense, breaking the fourth wall is really her having the audience be part of her life. It's the way that people who do spend a lot of time on their own often do have to be creative with picturing who's listening and who cares about them. In this case, the audience cares about her is how she sees it.

Call Me Kat allows you to display other aspects of your talents including your skills as a physical comedian. You even got to do spit-takes in an episode.
[Big laugh.]

What do you like best about that kind of humor?
Keep in mind, not everything I do is stuff that I think is the funniest [laughs]. When I'm told to do a spit-take, I do a spit-take. That's kind of how it works. I've always been a very physical person. I was a dancer from the time I was very young. I grew up watching Lucille Ball and Carol Burnett and Tracey Ullman, women who really all-inhabited their bodies in a very specific and comedic way.

For me, I think that Darlene Hunt, our show runner and creator, just incorporated a lot of things about me. I am very physically flexible, so she's capitalized on that. I like to say that if my mom —when I was 11 and started acting— could have designed a show for me, it would have been Call Me Kat, because this show takes everything I can do and it puts it in there. She can sing, she can dance, she's funny with her body, she can kick high [laughs]. That's what it feels like.

I'm so glad you mentioned singing because you do get to sing on the show. Is it daunting or fun to sing with and in the presence of Cheyenne Jackson, who plays Max?
It's absolutely terrifying! I specifically requested that I not have to sing in front of him for extended periods of time because, first of all, he's absolutely incredible. He also is a person who, if you ask him to sing something 62 times, it's going to sound amazing every single time.

With me, you get about four takes out of me, and then my voice starts to suffer because I'm not a professional. It's incredibly lovely how welcoming he is and how much support he gives me, but it really is standing in the presence of greatness to work with him and, especially, to sing in front of him.

I'm also glad we started talking about Cheyenne, because your queer fans will no doubt be delighted that he, as well as Leslie Jordan, are a couple of your Call Me Kat co-stars. Is it as much fun to work with them as it appears?
Oh, absolutely! What I say about Leslie Jordan is, everything that you wish he's like is what he's like. That is no joke. Everything he says is a sound bite. We get to hear him be a little raunchier with his language because we get to see parts of him that other people don't. He's delightful, he's hilarious. Everything he says is an unbelievable story or joke.

I did not know much about Cheyenne, to be honest, before getting to work with him. He's just one of those people...his presence and his heart are so stunning. He's goofy and playful. He's adorable! We have a great time. I wouldn't say that if it wasn't true. I would just say, "Oh, he's really nice to work with."

Early in your acting career, you played the young version of Bette Midler's character C.C. Bloom in Beaches. Did you develop a sense of a gay following after that?
I was told that I did and I found that to be true. I was raised by two very liberal documentary filmmakers who lived in the West Village and had gay friends when that was a scandalous thing to do. I was raised with a very strong love and appreciation for the gay community. My parents had gay friends. I grew up seeing men as couples in our home; having dinner with us and celebrating holidays with us. I have gay family members, as many of us do. I'm a happy liberal and loving ally. For sure the Bette Midler connection is a very specific thing, which I love to be part of.

Lainie Kazan played your mother in Beaches, Kathy Bates played your mother on The Big Bang Theory and now Swoozie Kurtz is playing your mother on Call Me Kat. When it comes to playing a mother yourself, do you think you'll look to the examples they set for inspiration?
[Big laugh] oh my God, that's an amazing question! I'm probably most like Lainie Kazan. I don't think I can avoid that. Actually, there's a lot of my mom in the Swoozie Kurtz character. But my mom's really the Bronx Jewish version.

Kat owns and operates a cat-themed café. Do you have any of your own pets, say a cat or a dog?
I do. I have three cats. I had four and, unfortunately, I lost one of them during COVID. It was definitely a rough year in the cat department. But I do have three fur babies, as we call them. And like Kat, I like to say, "I'm not a sad cat lady, I'm a rad cat lady."

Finally, what are you most looking forward to about being a guest host on Jeopardy!?
Oh, my gosh. When I think of it, it feels like it's going to be like a dream. I got to go to Egypt many years ago. I remember standing in front of the Sphinx and the pyramids. I felt like I had walked into a postcard; it's that iconic an image. I guess I'm comparing the Jeopardy! set to the Sphinx and the pyramids, but in terms of I feel like it's going to feel like I've been placed into a postcard of Jeopardy! I can't imagine it won't feel that way. I'm beyond excited! It is one of the most iconic things I think I'm ever going to do in my in my career.

Leslie Jordan has tales to tell