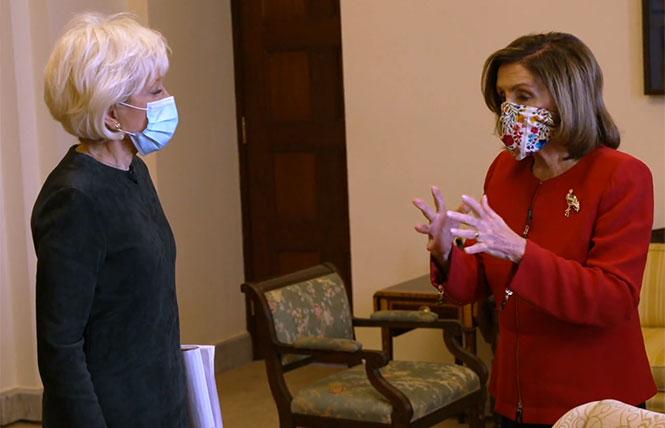 Here we are in a new year, with new TV series about to drop next month, but really—how does anyone top the drama wrought on Epiphany at the Capitol? We kept thinking of all the folks who told us that President Trump would never instigate a coup as we watched a simple roll call vote turn into an attempt to subvert the election and kill the Vice President and Speaker of the House.

In her searing interview with Lesley Stahl on 60 Minutes Jan. 10, Pelosi gave Stahl a play-by-play of the insurgence and the assault by Trump supporters, who yelled death threats to Vice President Pence and Speaker Pelosi as they marauded through the halls of the Capitol.

Pelosi wanted to stay at her podium, but Capitol police, guns drawn, demanded she leave, insisting that she was not safe.

Nancy Pelosi: They were vocally saying, "Where's the speaker? We know she has staff. They're here someplace. We're gonna find them."

As video rolled, Stahl's shock is palpable as Pelosi points to how her door was broken in.

Ma Rainey's Black Bottom
The brilliance of Viola Davis can never be overstated and she is Ma Rainey in George C. Wolfe's film of the August Wilson play. Davis's performance is possibly the best of a career that already includes an Oscar, Emmys and Tonys. Her portrayal of the bisexual queen of the blues is sure to win her more accolades.

The film focuses on a recording session of her famous song, "Ma Rainey's Black Bottom," but is about the internecine conflict of Black artists with appropriation and co-optation by white producers. And it is about what a signature figure Ma Rainey was among performers of her era.

Ma Rainey, along with Bessie Smith (with whom she is rumored to have had an affair), revised the Black female experience from submission to confident authority.

In her 2011 book Blues Legacies and Black Feminism, Angela Davis wrote that Rainey's lyrics and the women she sang about "explicitly celebrate their right to conduct themselves as expansively and even as undesirably as men," living lives that "transgressed these ideas of white middle class female respectability."

Ma Rainey fought the heteronormative standards of her era as much as she did the racial constraints and she definitively tossed the respectability ethos out with the rest of the trash.

It is impossible to overstate how incredible Davis is in this film. Sweaty, loud, provocatively sensual and sexual, angry, soulful, laughing, crying. Her performance once again shows how Davis continues to broaden a range that already seemed greater than that of all but a few other living actresses. Davis is simply breathtaking as she explodes Ma Rainey off the screen.

This is also, tragically, the final film of Chadwick Bozeman and recalling that while you watch imbues this film with some sadness, because his pivotal starring role as Rainey's self-important and chafing-at-the-bit trumpeter, Levee Green, is stunningly good. Even more so when one considers how ill he was during this production.
If you've put off watching this, don't. It's magnificent.

Funny Boy
Canadian director Deepa Mehta has made some superb films about queer life, several of which have been extremely controversial in India, where much of her work is situated. Her 1996 film Fire remains one of the great lesbian films of all time. Fire and her 2005 film Water were both boycotted in India. Her new film, Funny Boy, has also sparked controversy in Sri Lanka where homosexuality is still illegal, and elsewhere.

The film tells the coming of age story of Arjie Chelvaratnam, a young Tamil boy in Sri Lanka who is coming to terms with his sexual identity against the backdrop of the increased tensions between Tamil and Sinhalese people before the breakout of the Sri Lankan Civil War.

Funny Boy explores how everything around Arjie and Shehan is in turmoil while they are on a clear path to each other. The two boys are sure about who they are and what they want and there is real chemistry between the two actors. Arjie and Shehan come to the relationship—which is artfully and realistically depicted, in Mehta's dependably compassionate style—confident of their own gayness. They aren't trying to be or hoping to be straight—despite what is expected of them by others. So this is a film about young queer desire as much as anything else. But it is also fundamentally about the harsh climate in which such love is expected to blossom and Mehta juxtaposes the political turmoil against the emotional one.

The movie rights were acquired by Ava DuVernay's Array Releasing who will handle worldwide distribution, which is quite significant, and the film is now on Netflix.

So My Grandma's a Lesbian
Eva (Ingrid Garcia Jonsson), is a successful lawyer living in Edinburgh about to marry into a politically prominent and ultraconservative family. Then her grandmother Sofia (Veronica Forqué) announces she intends to marry her lifelong "friend," Celia (Rosa Marie Sarda). Cue Eva's quest to stop the women's marriage to preserve the promise of her own.

So My Grandma's a Lesbian, a Netflix original, directed by Angeles Reiné, debuted Christmas Day. Reiné's film is funny, charming and full of the sort of madcap familial and professional mix-ups and conflicts that will remind many of early Pedro Almodovar.

A wild Spanish take on a queer theme, this is far more than a fluffy rom-com. The three female principles are superb and the love affair between the two septugenarians is absolutely fabulous in its joyousness and spontaneity.

This is Reiné's first film for Netflix, but hopefully not her last.

Alex remembered
Finally, it was the end of an era when Jeopardy! aired its final shows hosted by Alex Trebek last week. Trebek was a TV mainstay and his grace as he battled cancer was a lesson in legacy as well as humanity. There is no replacing Trebek, so it remains to be seen how the show moves into a new chapter without him.

The Millions: The Lavender Tube on 'A Million Little Things,' 'Grey's Anatomy,' & Jonathan Capehart
Sign up!