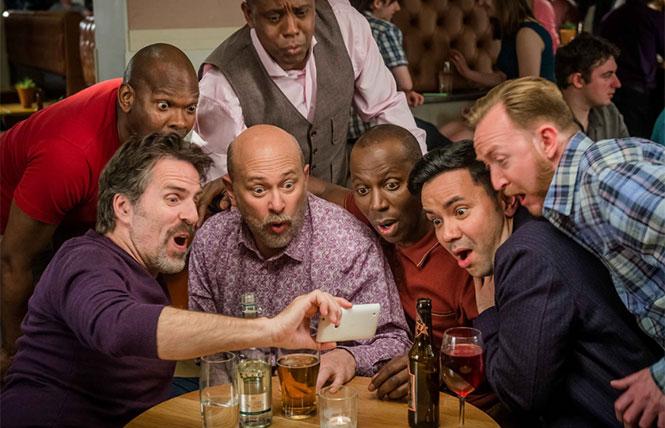 The main cast of 'Cucumber/Banana'

This hell year is almost over and Trump is almost done. Soon we can exhale. Mitigating the terribleness in some small measure was a slate of memorable LGBTQ TV.

We don't do top ten lists, because they are too subjective and there is no such thing as a perfect TV show. But here are a dozen of the year's best evocations of queer and trans experience on the tube. If you weren't watching, thanks to the magic of non-stop streaming, you can watch it all now. 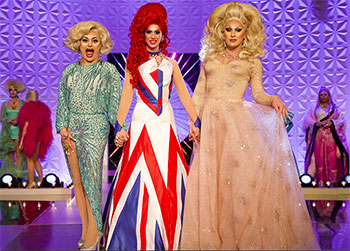 There were reliable places to go to be immersed in queerness. RuPaul's Drag Race has a permanent spot on any best-of list for any year because, after more than a decade, RuPaul is still bringing it. The series is fun, snarky and emotional. It is unreservedly made for us and about us and we love it.

RuPaul Charles, who just turned 60, also worked to get out the vote in a year of divisiveness that put LGBTQ people and people of color at incalculable risk. And we would add that seeing RuPaul as the face of Old Navy this holiday season has made us particularly happy as we imagine Trump supporters trying to explain to their kids why they can't shop at their favorite store anymore.

Near-perfect
Beyond RuPaul, who is always flawless, there were a few near-perfect shows this year with performances and story lines that resonated long past the final episode of the season or series. 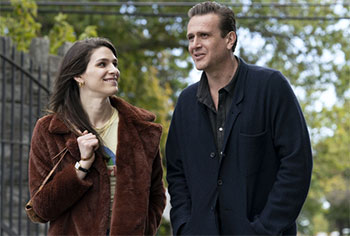 Eve Lindley and Jason Segal in AMC's 'Dispatches from Elsewhere.'

One of the best performances of the year was Eve Lindley in AMC's Dispatches from Elsewhere. Lindley is a revelation as Simone, a young trans woman falling in love with a cis-het man, Peter (Jason Segel, the show's creator) who is falling in love back.

This series could not be more perfect for the near-apocalypse in which we are currently living, as it suspends all reality while lifting you up with its magical realism and charming trans love story.

Segel's performance is heartbreaking, and perhaps his best-ever acting. But it is Lindley's riveting and luminous performance that is unforgettable. Also starring Sally Field in a very different and compelling role and André 3000 way outside his rapper comfort zone and also oh-so-good.

Other excellent performances by trans women actors that stood out this year were Hunter Schafer as Jules Vaughn in HBO's stellar Euphoria and Jesse James Keitel as Jerrie in ABC's Big Sky.

Euphoria is the better series about an ensemble of high school teens and their relationships, in which Jules is a main character, but Keitel's performance as sex worker and singer Jerrie is a heartbreaker that stays with you. 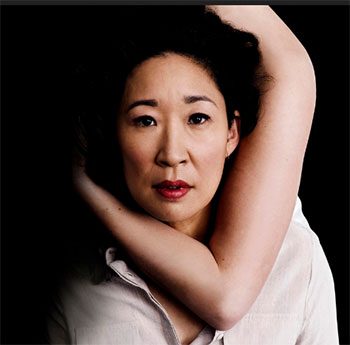 Killing it
AMC's Emmy-winning drama Killing Eve had the best performances and best script of any series in 2020. If you like your lesbian eroticism killer, this is definitely the series for you. Sandra Oh as the eponymous MI5 agent slides from understated ennui to barely contained hysteria. Oh's Eve is a perfect foil for Jody Comer's over-the-top Russian assassin, Villanelle, who is the most spectacular lesbian on TV—beautiful, sensual, wears amazing clothes and kills with impunity—or does she?

The sensuality is breathtakingly portrayed, the love story disturbing af and the two principles are extraordinary as they tear up the screen in markedly different ways. Also starring the renowned Fiona Shaw, in a true tour de force, and Kim Bodnia as her sometimes lover and Villanelle's handler.

Fruits & veg
Cucumber and Banana are two British series focusing on the interracial relationships of several gay men and they are both wildly uneven and incredibly compelling.

The titles (plus a companion film, Tofu) are culled from the Erection Hardness Score developed by the European Association of Urology. The EHS describes the stages of the male erection as tofu, peeled banana, banana and cucumber. Delicious, right?

And so are these interconnected tales from Russell T. Davies, creator of the original Queer as Folk. In Cucumber, Davies details the disintegration of the relationship between middle-aged, middle-class Henry Best (Vincent Franklin), who is white, and his Black partner of nearly a decade, Lance (Cyril Nri). Everything comes undone when Henry refuses to marry Lance.

Some of these episodes are a bit soap-operatic while others are truly fabulous, but what resonates here is how unflinchingly gay these series are. These are gay men with gay desires, gay dreams and gay dramas and you really want to watch both series. (Available on Hulu, Amazon Prime and Apple iTunes.) 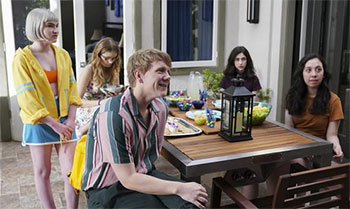 Million, Okay, Trinkets
Josh Thomas' (Please Like Me) queer familial comedy Everything's Gonna Be Okay, will leave you hopeful that there's a future beyond COVID-19, even if the series starts with dying.

Nicholas's gayness is a given, as is Matilda's autism (Cromer herself is on the autism spectrum) and each big piece of who they are —as well as Genevieve's anger— informs how they interact and how Nicholas cares for the girls and himself. (Available for streaming on Hulu and Freeform.)

Is there anything we need to say about Schitt's Creek, or does the fact that no other comedy has ever swept the entire Emmy category speak for itself?

Series with young queer characters that were among the year's best are NBC's This Is Us and ABC's A Million Little Things. Both series give us the characters of Tess (Eris Baker) and Danny (Chance Hurstfield) coming of age as gay. They are always gay. Born gay? Maybe. It's such a different take on queer kids. Rather than the standard late-blooming gay adolescent, these series present middle-school kids being out and open about their sexual identity. It's groundbreaking.

Trinkets, a Netflix original series. was one of the year's best. We loved its believable take on three teenaged girls, one of whom is a lesbian, who are thieves and meet in a program for shoplifters. The characters are just so true and real, the story lines engaging, the writing superb and there will be a second season in 2021.

Finally, Don Lemon and Rachel Maddow brought us their out queerness every night on CNN and MSNBC as anchors of their respective prime time news programs. Representation matters, and these two are passionate journalists who have done the some of the best work 2020 had to offer in revealing the breadth of corruption in the Trump presidency and administration and holding them accountable.

For the best —and hopes for the end to the worst— you really must stay tuned. Happy New Year!