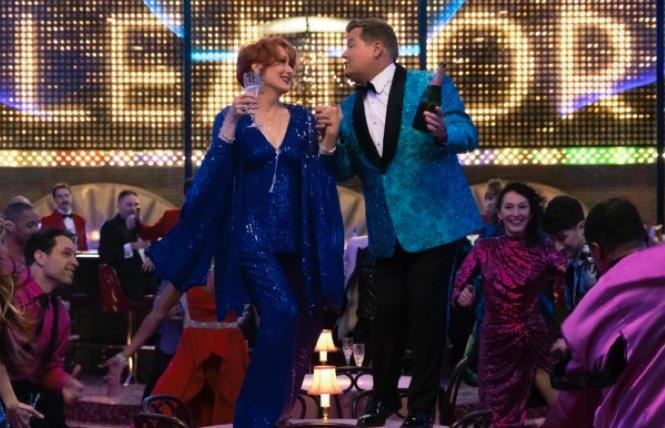 Meryl Streep and James Cordon in 'The Prom'

For a while there, 21st-century movie adaptations of Broadway musicals were being given the Rob Marshall treatment. Oscar-winner Chicago got the ball rolling. Then it was followed by the dismal Nine and the disastrous Into The Woods. Marshall's next project? The live-action The Little Mermaid.

Now Ryan Murphy, who shares Marshall's initials, as well as his taste for bombast and Meryl Streep, has entered the fray with his big screen version of the Tony-nominated 2018 musical The Prom (Netflix). Murphy's love of musicals and theatrics can be traced back to his inexplicably popular network TV series Glee. His Emmy-winning 2014 movie adaptation of Larry Kramer's dramatic play The Normal Heart proved he had the talent for transferring stage to screen.

Ryan stumbles with the well-intentioned The Prom. Written by Matthew Sklar, Chad Beguelin (who is gay) and Bob Martin, The Prom is about the way disparate worlds clash and somehow mesh. Lesbian high schooler Emma (Jo Ellen Pellman) wants to attend the prom with her girlfriend in her small-minded Indiana town (is there any other kind in the land of Mike Pence?). She is met by resistance, primarily from PTA mother Mrs. Green (Kerry Washington), a monster in a sweater set who clings to her misguided "values." Little does Mrs. Green know that Emma's paramour is her daughter Alyssa (Ariana DeBose).

Meanwhile, in Manhattan, a self-absorbed quartet of actors — Dee Dee (Meryl Streep), Barry (James Corden), Trent (Andrew Rannells) and Angie (Nicole Kidman) — all desperate to reclaim the spotlights fading on their respective careers, learn of Emma's situation on Twitter and decide to make her their personal cause célèbre.

As you can imagine, their arrival is more than a little disruptive. Not taking no for an answer, the thespians persist in their lesbian rescue mission. Along the way, we learn things about each of the characters, usually delivered through a song. Dee Dee's two Tony Awards are gathering dust as they await a third. Barry never overcame the trauma of being thrown out of his parents' house when they discovered he was gay, as well as his own sad prom experience. Chorus girl Angie is still waiting in the wings for her big break. Actor/waiter Trent worries that his stint on a sitcom has ruined his chances of being taken seriously as a Julliard-trained actor.

In the meantime, as preparations are being made for the prom, Emma has her own struggles. Her limited wardrobe poses a problem when it comes to appropriate prom wear. Alyssa is resistant to come out to her mother. Behind the scenes, evil cheerleaders Kaylee (Logan Riley) and Shelby (Sofia Deler) are planning something, not quite on the level of a Carrie-styled bucket of pigs' blood, but unpleasant, nevertheless.

Luckily for Emma, she has other good people on her side. Mr. Hawkins (Keegan-Michael Key), the high school principal, who is also a big fan of Dee Dee's, does everything in his power to stand up for Emma. Also, Emma's grandma (Mary Kay Place), with whom she lives after her parents disowned her, is a big supporter of her granddaughter. But that doesn't mean the process of acceptance is going to be easy. Quite the opposite, in fact.

You probably won't find yourself humming any of The Prom's tunes. The choreography is forgettable. Some of the performances, which are supposed to be parodies of the characters, are simply too exaggerated to be funny. However, for those in need of the slightest bit of uplifting in these dark times, The Prom will do in a pinch. Rating: C-