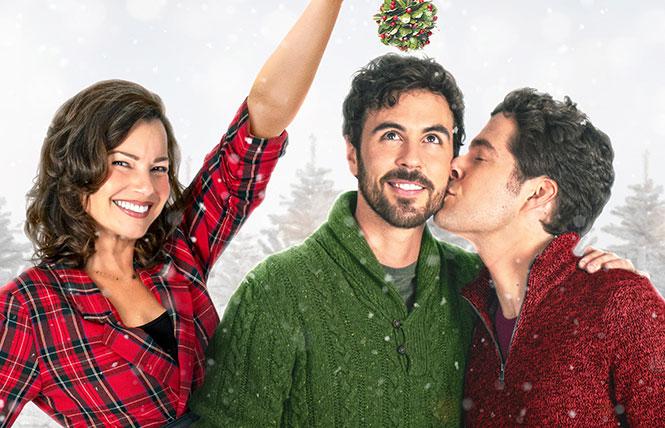 Once again, holiday movies will abound on your TV screens for the Christmas season, but this year there's a bit of a queer twist to the festivities. For the first time, holiday films made especially for queer-inclusive families are turning up in the most unexpected places.

On December 12, Lifetime TV will premiere The Christmas Setup, a holiday love story featuring two gay men as lead characters. In a romantic twist, the happy couple will be played by Ben Lewis and Blake Lee, a gay couple who are married in real life. Among Lewis' many small screen roles are as William Clayton on the CW's superhero series Arrow, while Lee attracted some attention for his recurring role on Parks and Recreation.

In The Christmas Setup, Lewis plays Hugo, an attorney in New York who goes home to Milwaukee for Christmas with his best friend Madelyn (Ellen Wong). Hugo's mom, the bubbly Kate (Fran Drescher) is in charge of the neighborhood Christmas celebrations. She's also a matchmaker, and when Hugo crosses paths with Patrick (Lee), his old high school crush, Kate does all she can to bring the two guys together.

But then Hugo is offered a huge promotion which would require him to move to London. As Hugo and Patrick begin to fall in love, Hugo must decide whether or not to take a once in a
lifetime job opportunity or to follow his heart.

The Christmas Setup is not unlike the many other holiday films that Lifetime has produced over the years. It's sweet and wholesome, a little sappy, but ultimately uplifting and enjoyable. Lewis and Lee have amazing onscreen chemistry; no surprise, since they are, after all, a couple. 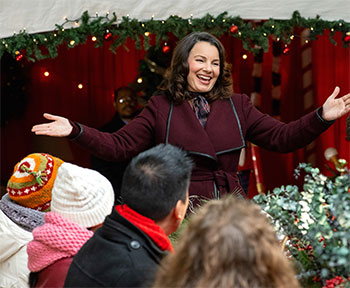 Fran Drescher in 'The Christmas Setup'

Drescher, best known as The Nanny in the classic sitcom, is always fun to watch. She steals every scene she's in, here playing a variation of her famous screen persona.

The actress has a long history of supporting LGBTQ equality. Ten years ago she starred in Happily Divorced, a two-season sitcom in which she played a woman whose roommate just happened to be her gay ex-husband. That show was taken from a slice of Drescher's own life. She created Happily Divorced with Peter Marc Jacobson, her real life ex-husband, an out gay man.

"This is a movie that is a holiday rom-com that is around a same-sex couple," Drescher said of The Christmas Setup in a telephone interview. "I feel as someone who's always been forthright on behalf of gay civil liberties that it's a great thing. It's important that we continue to normalize this as part of mainstream culture."

Drescher pointed out that the filmmakers created a beautiful world for the characters to inhabit and said that The Christmas Setup is a "feel-good film."

"I play the mother of a gay son and it's as easy to accept him as a child with brown eyes," she said.

The actress hopes that the example she sets in the film will serve as an inspiration for Lifetime's core viewership. The network's programming is geared towards straight women and their families, some of whom might be surprised to see a film like The Christmas Setup on the Lifetime holiday schedule. Drescher has a message for anyone who might take issue with the film.

"Many of you might have a gay child living in your home right now," she said. "And if you persist in alienating them and making them feel like the odd man out or afraid to come out and be their authentic self, you're doing them a grave disservice. And you're doing yourself one too. You're here to be accepting and loving, and everyone deserves to live an authentic life. It's not your responsibility to stand in judgment of them. Because if you stand in judgment of anyone, you've missed the point of why you're here." 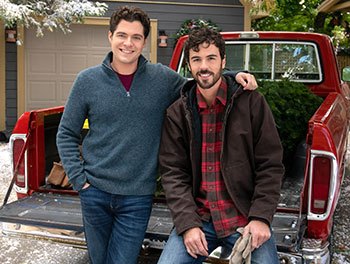 Ben Lewis and Blake Lee in 'The Christmas Setup'

Prime (about Time)
According to Lewis, he and Lee were shocked to find themselves in Lifetime's first holiday movie with a lead gay story line.

"We feel very lucky to be representing our community in that way," he said. "Certainly it doesn't represent the full spectrum of the community, but we hope that it's a good, and frankly overdue, first step."

Lewis also spoke of what it was like to act in romantic scenes with his own husband.
"In a ten-year relationship, there are not a lot of firsts," he said. "But to be acting opposite each other for the first time ever was really interesting because we're so comfortable with each other. To try and remember what it feels like at the beginning of a relationship, when the initial sparks are flying, all the nerves and the self-consciousness that goes along with that, that was really an interesting and fun and romantic time to revisit. It was a really great experience."

The actor admits that he and Lee were a bit nervous going into the project, and that they had some fleeting moments of tension during the shooting, but they worked through those feelings fairly quickly.

Lewis added that once it was announced that they were doing the film, the reaction was overwhelmingly positive. Neither of them were familiar with made-for-TV holiday films, he pointed out.

"You don't really realize how many people watch these movies and love these movies until it's announced that you're doing one," he said. "Then all of a sudden everyone you know is coming out of the woodwork and saying how excited they are about it, so that's been really gratifying. I've seen a couple of negative tweets here and there there's always going to be that contingent of trolls in anything that you do. We're definitely focusing on the positive, and the positive has really been overwhelming."

Being on the set of the film was also a positive experience. It was the first set he was on where the majority of the key players were either members of the LGBTQ community or fierce allies. Pat Mills, the film's director, is gay, as is writer Michael J. Murray. Lewis spoke very highly of Drescher.

"I think the LGBTQ community is truly close to her heart and a part of her soul," he said. "She and I share a birthday which we celebrated together on set. You know how everyone has that one celebrity that you share a birthday with? They're your celebrity birthday twin? Well, Fran has always been that for me. So when I heard there was a possibility of her playing my mom I thought, 'This is too good to be true.' I knew we were going to be shooting on my birthday, and so I couldn't believe how lucky I was to be celebrating my birthday on set, in a pandemic, with Fran Drescher and my husband. It was beyond surreal, it was such a gift."

Lewis said that all possible precautions were taken during filming to keep everyone safe amid the pandemic. Cast and crew were tested three times a week, and everyone's temperature was taken daily when they showed up for work. A checklist of potential symptoms were crossed off each day to make sure that no one was experiencing any of them, and the crew wore masks whenever they were on set. And now that the film is complete, both Lewis and Drescher couldn't be happier with the results.

"It has no angst to it," Drescher said of the film. "No negativity. It's just joyful and loving and in the true spirit of the holiday, there's absolutely no downside. I just hope that more and more people in creative positions continue to present the diversity that is the human experience." 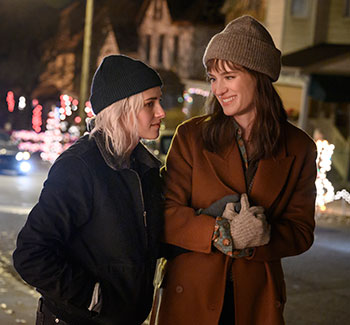 Get Happy
Also worth checking out is Happiest Season, a lesbian holiday film now streaming on Hulu. Directed by lesbian actress/filmmaker Clea DuVall, the film stars bisexual actress Kristen Stewart. Happiest Season is a charming fable about Abby and Harper (Stewart, Mackenzie Davis), a lesbian couple in Pittsburgh who have been together for about a year.

Abby thinks that Harper is "the one" and buys her a wedding ring. When Harper invites Abby to spend Christmas with her family, Abby agrees, only to find out a little too late that Harper isn't out to her conservative parents. Abby agrees to pretend that they're just friends for the next five days.

Harper comes from a very dysfunctional family. Her parents (Mary Steenburgen, Victor Garber) have spent their lives worrying about what the neighbors will think, while their other two daughters try a little too hard to live up to Mom and Dad's ridiculously high expectations.

Abby, meanwhile, is beginning to rethink her relationship with Harper after Harper reconnects with an old boyfriend (Jake McDorman), and an old girlfriend (Aubrey Plaza). As her parents' Christmas party approaches, Harper goes deeper and deeper into the closet as Abby feels increasingly left out.

A far more serious film than Christmas Setup, Happiest Season is nonetheless an enjoyable holiday story. Stewart and Davis are both superb as two young women who genuinely love each other, but who may or may not be able to overcome the obstacles now standing in their way. Steenburgen is especially good as the mom who seems to be more interested in putting her kids on display than she is in accepting them for who they are.

Although it deals with the very serious themes of coming out to one's less than accepting family and being true to oneself, Happiest Season is not a downbeat film. It has quite a few lighthearted moments and is cast to perfection with a group of actors who play off each other beautifully. It's a film about learning lessons. Abby must learn to give Harper another chance, Harper must learn to fully and proudly accept herself for who she is, while her parents learn the true meaning of embracing one's family during the holidays. It's a lovely film, one that might stay with viewers after the final fadeout.

Dashing through
And finally, The Paramount Network offers Dashing in December, which premieres on December 13. The film, which stars Juan Pablo Di Pace, Peter Porte and Andie MacDowell, will be simulcast on Logo, Pop and TV Land. It's another sweet, wholesome gay romantic holiday film.

The film's story is simple. When Wyatt (Porte) returns home for the holidays in an effort to convince his mother (MacDowell) to sell the family's Colorado ranch, an unexpected romance develops between him and the handsome new ranch hand Heath (Di Pace), who wants to save the ranch and its Winter Wonderland attraction. As they begin to fall for each other, Heath manages to reignite the spirit of Christmas in Wyatt's lonely heart.

Latin lover Di Pace, a native of Argentina, may make viewers hearts melt with his smoldering good looks. He and Porte are magical when they appear onscreen together. Both actors are gay, and the film features a diverse cast and crew.

Dashing in December may be another sweet and somewhat sappy film, but it's likable, and it's good to see so many gay and lesbian characters being included in mainstream entertainment.

Christmastime in the concert halls