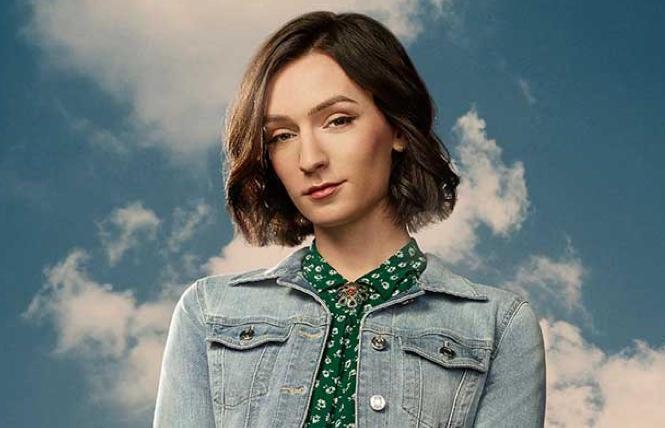 David E. Kelley never disappoints. The creator of such Emmy-winning series as Ally McBeal, The Practice, Mr. Mercedes and Big Little Lies has provided decades of satisfying award-winning drama with often quirky themes that run darker—and queerer—than one would expect.

Big Sky, which debuted Nov. 17 on ABC, is no different. The thriller stars private detectives Cassie Dewell (Kylie Bunbury, When They See Us) and Cody Hoyt (Ryan Phillippe) who join forces with Cody's estranged wife, ex-cop Jenny Hoyt (Katheryn Winnick), to search for two sisters who have been kidnapped by a truck driver on a remote highway in Montana.

But when they discover that these are not the only young women who have disappeared in the area, the investigation begins in earnest as they try to save the lives of the missing.

If you've ever been to Montana, you know the landscape is breathtakingly open and not a little daunting. Kelley plays with the landscape a lot to foster a conflicting sense of old-time, leave-your-doors-unlocked small-town safety juxtaposed with a vastness into which people could easily be swallowed up, never to be seen or heard from again.

There are stellar performances by the three principles and from noted character actor John Carroll Lynch (Fargo) and the series is replete with a transfeminine character, lesbianism, female sexual tension and more. Tuesdays. Highly recommended.

Candyland
The transition from Trump-Pence to Biden-Harris has been anything but smooth. The promise of January 20, 2021 is comforting. But the huge spike in COVID cases of a million in less than a week is terrifying. Trump's medical advisor, Scott Atlas, who has no expertise in infectious diseases, called for violence against Michigan Gov. Gretchen Whitmer on Nov. 16 as he railed against mask wearing.

With this going on, self-care is essential. On Nov. 15, the Food Network's Candyland debuted and it is the gayest show we have ever seen outside of RuPaul's Drag Race.

You must watch it. The predicate is the kid's game Candyland, which we have all played. A giant Candyland set was built and contestants must make Candyland cakes and wow—did we say how gay it is?

To underscore the gayness, HGTV hottie and home designer David Bromstad gave us a tour of how the set was built. And then we met our hostess, Kristin Chenoweth, everyone's favorite Emmy and Tony-winning Broadway diva. And yes, she sings, though not much, alas.

The teams journey to the Peppermint Forest, Gumdrop Mountains, Chocolate Mountain, the Lollipop Woods and Lemon Lime Springs while presenting themed sugar masterpieces for judges Nacho Aguirre and the always delightful Aarti Sequeira, who determine which teams advance down the board game path.

This sweets competition, which is filled with gay men and queer women, is an utterly enjoyable confection. Sundays 9-11pm.

Grey's Anatomy
Shonda Rhimes' Grey's Anatomy is the longest-running drama on ABC. The 17th season of the medical drama centered around the eponymous heroine, Dr. Meredith Grey, premiered on Nov. 12 and it was everything one hoped it would be.

The coronavirus took center stage. "That's the fourth patient I've lost today and they're all dying alone." So said Dr. Miranda Bailey (Chandra Wilson) to Dr. Richard Webber (James Pickens Jr.) as the series opened. (An aside: Wilson and Pickens Jr. have been on TV longer continuously than any other Black actors in TV history, since they have been with Grey's since season one.)

Hyper-realism has always been pivotal in the show's oeuvre. It was a difficult episode to watch because there was so much realism about the coronavirus as well as reminding us all that people are getting sick and injured and dying of other things. And then there was a subplot about child sex trafficking.

These are characters we know well and a show that navigates the most alarming of medical and social crises with a kind of comforting authority that we have come to embrace as necessary viewing. Ellen Pompeo remains the show's anchor and watching her age along with us has been part of what makes this series feel so real.

Oh and spoiler alert—Jackson and Jo are a thing now. (I know, right?) It's a wait and see about new queer characters or if the old ones will be back. Like all of us, the series is playing it one day at a time.

Scattering CJ
Scattering CJ is a documentary about suicide. In 2010, CJ Twomey, 20, shot himself to death after arguing with his mother. Wracked with guilt and grief, his mother, Hallie, put out an open call on Facebook, looking for a handful of travelers who might help fulfill her son's wish to see the world by scattering some of his ashes in a place of beauty or special meaning.

The response was amazing and forms the basis for the documentary. A thousand volunteers have taken CJ's ashes to over one hundred countries, including the Great Barrier Reef in Australia and the Great Wall of China. The documentary incorporates interviews with those who scattered the ashes—including one mother and son who have each been suicidal.

The documentary is also about mental illness, the fear of acknowledgment, the pain of stigma and all we must work to do to save the lives of the thousands of Americans who commit suicide each year. Check out the film's website to see it online. It is powerful and empowering. https://www.scatteringcjfilm.com

President-Elect
As we were writing this column, President-elect Joe Biden and Vice-President-elect Kamala Harris began a press conference. It was only their second since the election was called for Biden-Harris on Nov. 7. It was a chock full of data points and tone shift. For the past four years of covering this presidency in our role as investigative journalist, we have received tons of harassment as well as threats. Outgoing President Trump dubbed the constitutionally protected press the "enemy of the people," and some journalists have been physically harmed and some killed. It's been stressful every day.

Biden was frank and direct as he spoke to the room full of masked and socially distanced reporters. "More people will die" if Trump —who has refused to concede the election— and his GOP cohort, continues to block the transition. Biden explained the necessity of being able to facilitate the complicated COVID-19 vaccine delivery and how that is a top priority for him entering the White House.

Biden laid out a plethora of plans. He decried the failure of Trump to deal with the looming coronavirus crisis, called out Republican governors who have made mask wearing political, saying that it's a patriotic duty to wear a mask. He said people must be careful with Thanksgiving—no more than ten people, all of whom should be tested prior, and emphasized social distancing.

Biden also said he would forgive student loan debt, pass the HEROES Act, which he said could be done right now. He told reporters —most of whom were women of color to whom he was deferential and respectful, unlike Trump— he would try and get as much done immediately as possible.

Biden was earnest and forthcoming and the mere fact of his answering questions from the press was a page turned. Biden's intensity and focus should give Americans who voted for him, voted for him reluctantly or who voted against him a sense of calm. Finally, there is an adult in the room.

As the holidays approach, stay safe and of course, stay tuned.

Deafness, disasters and difference: The Lavender Tube on 'Deaf U.', 'COBRA,' and 'First Day'

Show Timing: The Lavender Tube on the 'pand-Emmys,' Ellen and Ruth Bader Ginsburg
Sign up!