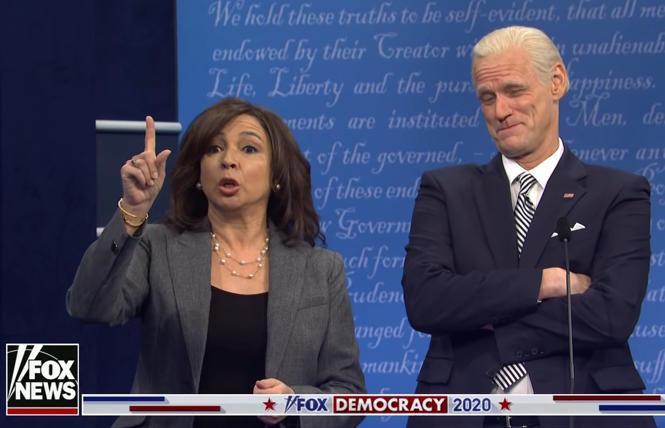 Throughout the months of the pandemic that has thus far killed more than 215,000 Americans from the coronavirus, reality TV has been like Xanax—a national calmative. We've watched The Great British Bakeoff, the Real Housewives franchise, Dancing with the Stars, RuPaul's Drag Race and of course, The Masked Singer; all good fun.

The reality show that played out Monday evening at the White House was anything but fun. In a macabre take on Evita, President Trump stood on the White House balcony, pulled off his mask with a flourish, and, breathing heavily, saluted to the press and an imagined crowd. Then Trump walked into the White House, sans mask, shedding coronavirus onto people visible inside the doorway.

A few minutes later, Trump reappeared. CNN reporter Kaitlan Collins said he had not liked the first photos and video taken of his return, so he was having it re-shot, presumably for a campaign video. 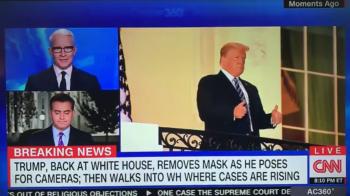 Several days earlier, Trump had been airlifted out of the White House and flown to Walter Reed Hospital for treatment after his oxygen levels became precipitously low and he spiked a high fever. In what would, in any other administration, be a national scandal, the White House had tried to hide the president's COVID-19 status from the public until he got too sick and had to be taken for advanced treatment.

During his hospital stay it was revealed that Trump had been given two experimental treatments unavailable to the public, a monoclonal antibody cocktail given to him for compassionate use and Remdesivir, an experimental antiviral used to treat Ebola patients, also for compassionate use. Trump was also treated with Dexamethasone, an IV steroid known for giving patients a false sense of well-being and mental confusion.

Trump's physician, Navy Cmdr. Sean Conley, gave several press briefings about Trump during his stay at Walter Reed, but refused to give details about Trump's actual status. When asked repeatedly by reporters about Trump's lung scans, Conley cited HIPAA privacy restrictions. But as former Health and Human Services Director Donna Shalala, now a member of Congress, said, she wrote HIPAA and it says nothing of the sort.

Prior to his release from Walter Reed, Trump tweeted, "Don't be afraid of Covid. Don't let it dominate your life," and noted he felt better than he had in 20 years. This false messaging in the midst of a global pandemic where in the U.S. cases are on the rise in 22 states, is dangerous and makes clear Trump has learned nothing from his own rarified treatment that arguably saved his life.

Then came the return of the conquering hero. White House press secretary, Kayleigh McEnany, quarantined at home with the virus, tweeted "Love seeing our President @realDonaldTrump return home to the White House & stand strongly on the balcony!" with a photo from her TV screen of Trump's performance. 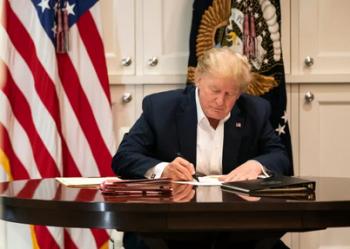 Trump scribbled on blank pieces of paper in another staged photoshoot at Walter Reed Hospital.

By Tuesday morning, Trump, who is still receiving those experimental IV drugs via the White House Medical Unit, tweeted that the coronavirus was "less lethal" than the flu and wrote, "Many people every year, sometimes over 100,000, and despite the Vaccine, die from the Flu."

Veteran reporter Bob Woodward told CNN's Wolf Blitzer that Trump was "acting like a madman." Carl Bernstein, told CNN's Don Lemon, "We are now in the midst of a national security crisis that is different from any in our history."

Dr. Jonathan Reiner, White House physician to George W. Bush, told CNN's Erin Burnett it was time to invoke the 25th Amendment. "There doesn't seem to be anyone in charge of his care other than the President of the United States, other than the patient," Reiner said.

Multiple news outlets reported that Trump's oldest son, Don Jr., said his father was "acting crazy" and "needed an intervention." Trump's former Comms Director, Anthony Scaramucci, told CNN's Chris Cuomo that Trump was "I don't know, the American Mussolini, standing on the balcony ... we've never had a president stand on that balcony and do what he just did."

With just a few weeks left till Election Day, the choices may never have been so stark: the guy who wears a mask or the guy who posts videos of himself trouncing a WWE wrestler whose head has been Photoshopped to be a coronavirus cell.

Saturday Night Lost
With scenes like Trump's authoritarian Covita on the balcony, it's never been harder to do satire. The season opener of Saturday Night Live proved that on Oct. 3 with a cold open that was an odd recap of the first presidential debate, which felt like eons ago.

The best part of the skit was Carrey's Biden using a remote to silence Trump and telling people to revel in the "Trumplessness." But with Trump in the hospital and his status at that time unknown, it was more cringe-worthy than funny and the whole thing felt old, tired and so last season.

Host Chris Rock added to the discomfort with a ramblingly unfunny both-sides monologue. He ended telling folks to vote, but not before taking down the Democrats as well as Republicans.

On SNL she sat in the audience, dressed as Ginsburg. She looked heavenward with a hand on her heart. A graphic on the screen read, "Rest in power." 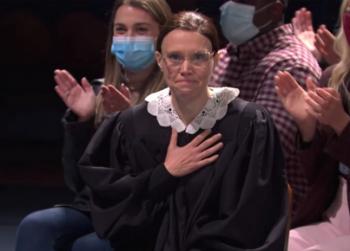 Later, McKinnon told the press, "For so many of us, Justice Ginsburg was a real-life superhero: a beacon of hope, a warrior for justice, a robed crusader who saved the day time and again. Playing her on SNL was a profound joy because I could always feel the overwhelming love and gratitude that the audience had for her. It was one of the great honors of my life to meet Justice Ginsburg, to shake her hand, and to thank her for her lifetime of service to this country."

One high note; SNL added Black lesbian comedian Punkie Johnson to the cast. She joins McKinnon and Bowen Yang as out queers. Johnson got her start at the prestigious The Comedy Store and is only the second Black lesbian on the show in 46 seasons. Danitra Vance, who was on SNL in the 1980s, was the first, but was not out to audiences at the time.

Finally, Netflix knows us and loves us and so they dropped the sixth and final season of Schitt's Creek early. The series swept the entire comedy category of the Emmys a few weeks ago and if you needed some queer TV with beloved characters to help you navigate this hellscape, this is it.

Every day some new drama hits the news, so you really must stay tuned.