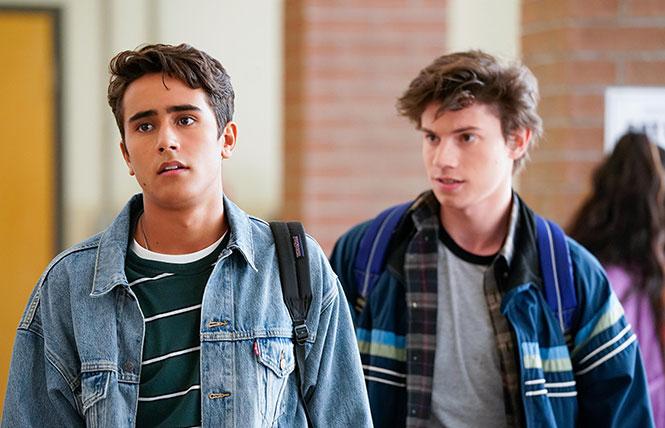 "Dear Simon, Screw you for having the world's most perfect, accepting parents [and] the world's most supportive friends, because for some of us, it's not that easy. My story is nothing like yours."

So begins the disenchanting new Hulu TV series, a spin-off of the 2018 Love, Simon, the first gay teen romance film released by Hollywood. Love, Simon was seriously flawed with its privileged white, upper-middle class hero passing as straight, hetero-normative template, and stuffed with cliches about teens and LGBTQ people.

Simon falls in text love with a secret gay classmate, is dragged out of the closet by a manipulative fellow student, makes a crazy declaration of love, ending with his first gay kiss on a Ferris wheel in front of the whole school.

One needn't have watched Love, Simon, as the plot is regurgitated within the first five minutes via Victor's Instagram messages to Simon providing a skeletal context. Simon's voice-over narration revealed a wry, breezy, self-effacing, comical tone that at least made Simon semi-plausible with the veneer of a persona.

Cleverly, Love, Simon married two over-wrought genres, the coming out story with the mystery, as the identity of Simon's confidential admirer, that functioned as a cliffhanger, wasn't disclosed till the final frame. Love, Victor is nothing like Love, Simon, lacking the modest charm and suspense of the original.

Love, Victor was created and produced by Disney+ TV, who became upset over scenes of alcohol use (minor), marital problems (Victor's parents), and sexual exploration (tame with only kissing and no premarital sex), that might disturb families with young kids.

So Disney sold it to Hulu, yet Love, Victor has Disney imprints all over it. We are back again at Creekwood, a wealthy public high school that doesn't exist in the real world, but only in the imagination of Hollywood scriptwriters, including a Coney Island amusement park-like setting for its Winter Carnival, and vice principals/teachers as buffoons that should provoke the ire of the AFT and NEA. There isn't one pimple on any of the students, probably because all the main teen characters are played by gorgeous actors in their 20s, long past their acne-prone years. 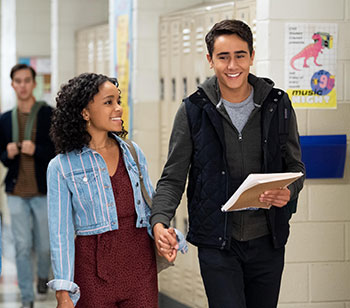 Victor (Michael Cimino) is the eldest son of an allegedly religious, faux-working-class Texan Columbian-American family, who move to Atlanta for a fresh start, after his mother (the terrific Ana Ortiz, Ugly Betty) had an affair with the father's (James Martinez) boss.

Unlike Simon, who knew he was gay, Victor is confused about his sexual identity. His sullen rebellious younger sister Pilar (Isabella Ferreira) is bitter about relocating and losing her boyfriend. As soon as they move into their swanky four-bedroom Georgian apartment, Victor meets Felix (Anthony Turpel), a dorky nerd, destined to become his annoying best friend.

A part of Victor still likes girls and within five minutes of stepping foot into Creekwood, he bonds with the most popular one, Mia (Rachel Naomi Hinson, This Is Us) romancing her throughout the entire series. He also encounters the openly gay Benjie (George Sear) and is instantly smitten with him, though he has a boyfriend.

If these characters and plot sounds familiar, think back to Disney's 2006 TV movie High School Musical which also featured the same types with both featuring basketball-playing male leads and casting women of color as love interests.

Love, Victor is the gay non-singing/dancing version of High School Musical minus the catchy songs and bouncy choreography that kept your mind off the inane script and stereotypical characters. Actor Nick Robinson, the original Simon, is an executive producer and functions as a disembodied gay relationship advice-giving Yoda to Victor.

You know there are problems when the most engaging character is the mother and not your leading gay protagonists. Aside from banal postings to Simon, we have no clues about Victor's interior conflicts or loneliness, as both he and Benjie are dull and bland, lacking any depth.

While inevitably played by straight performers, neither one even acts gay, a 0 on the Gaydar meter. To be fair, the "stars" had little to work with, since the dialog is cluelessly unrealistic as to how millennials speak and act, with one character asking another while dancing, "What is your favorite Jimmy Stewart movie??"

It is mystifying that Disney worried this show would offend some viewers, which if the script had actually done so, might have rendered Love, Victor more compelling and relevant. What is sad is that the concept of a true working-class Latino teenager struggling to come out is a worthwhile one. But Love, Victor, despite the undoubtedly good intentions of everyone involved in the project, comes uncomfortably close to trivializing what for many non-privileged people of color raised in culturally traditional religious environments, can still in 2020 be a frightening, wrenching experience of acknowledging one's sexuality.

Yet with all its deficiencies, from an adolescent perspective the program is watchable, so one can only hope some isolated teenagers wrestling with their orientation and how to fit in, might be emboldened to accept who they are and learn to be themselves. This might be the only consolation of the frustrating wasted opportunity that is Love, Victor.

From Ana, with love an interview with Ana Ortiz