From Ana, with love an interview with Ana Ortiz 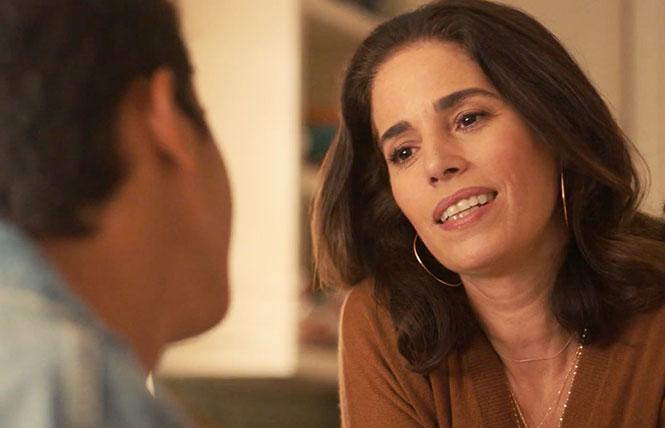 If you loved Love, Simon, the 2018 movie based on Becky Albertalli's popular Y/A novel, then you will most likely feel the same affection for Love, Victor, the new Hulu series set at the same high school from which Simon graduated and is still fondly remembered. The series premieres June 17.

As if being the new kid at school isn't stressful enough for any teen, after his family — including mother Isabel (Ana Ortiz), father Armando (James Martinez), sister Pilar (Isabella Ferreira) and younger brother Adrian (Mateo Fernandez) — unexpectedly relocate from Texas to Atlanta, Victor (Michael Cimino) is also questioning his sexuality.

Forced to think on his unsteady feet, Victor basically tells tall tales about himself and his love life to everyone. Everyone, that is, except for Simon (Nick Robinson), with whom he has established a correspondence. But one way or the other, maintaining the charade or coming out, is going to present all sorts of challenges.

As Victor's mother Isabel, Ana Ortiz is given an opportunity to stretch as an actress and play a wide range of emotions. In Ortiz's more than capable hands, Isabel is a complex and multi-faceted character and it's a pleasure to see such a talented actress give her all to her performance.

Ortiz, whom many will also remember from her portrayal of Hilda on Ugly Betty was kind enough to answer a few questions before the premiere of Love, Victor. 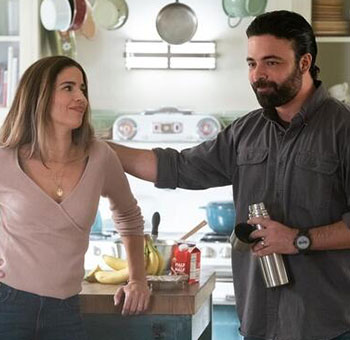 Gregg Shapiro: Had you seen the movie Love, Simon prior to taking on the role of Isabelle in the Hulu series 'Love, Victor,' and if so, what did you think of it?

Ana Ortiz: I did see Love, Simon. I thought it was a really darling, feel good movie. Something I could watch with my kids. That's always a plus for me.

What was it about Isabel that appealed to you?

What appealed to me about Isabel is that there's this expression that's been going around a lot, "Representation matters." I don't think we've ever seen a family like this. In my culture, the machismo is alive and well and so prevalent. It could be really powerful for people in the Latino community to be able to say, "Oh, that's me. That's my family."

For me, to play Isabel, I'm the polar opposite of her in so many ways. It was interesting to explore that notion that you could possibly not accept your kid because of who he loves. It's something I've experienced in my own family, so to be able to portray it and not keep it in the closet — pardon the bad pun — is an exciting prospect for me. I think our community needs it now more than ever and we do it in a sweet, humorous and honest way. That appealed to me incredibly.

I was the new kid at school when I went to high school. I had gone to the same school for eight years and then I went to LaGuardia in New York as a new kid. It's so scary and so intimidating. I remember being frightened, but also, being the person that I am, just putting on a brave face and acting like, "I don't care! This is great! Whatever. Yeah, hi!" I think I covered it up with a lot of bluster, but inside it was a terrifying experience.

Isabel is a piano teacher, and there is a wonderful scene in 'Love, Victor' where you are sitting at the piano singing. For people who weren't aware of it, you have a really lovely singing voice. Do you have any stage musicals on your resume?

You are so sweet! As a voice major, and I never got to use my singing very much. I'd done some musicals. I did Hair and we toured Europe with that, which was super-exciting. Other than that, I've sung background vocals for friends of mine. I recorded some songs here and there with friends. But it's never been as big a part of my career as I wanted. When the opportunity was presented to me in this show, I leapt on it [laughs]!

You have a few Emmy Award moments in 'Love, Victor,' including the scene where the real reason why the family had to leave Texas for Atlanta is revealed. What would it mean to you win an Emmy for playing Isabelle?

Oh, gosh, it would mean everything! It would also be an incredible moment not only for me as a Latin actress, but also for the LGBT community as a whole to have that recognition and to finally be recognized and to have our stories be told.

I think we've heard a lot of gay stories from many different perspectives but I can't think off the top of my head of a Latin family taking on the idea that their son is gay and the unacceptance of that. That was the thing about Love, Simon, he was so accepted by his parents. In the Latin community, we don't experience that as often as we would love to. In our community, machismo is still a big part of who we are. I think it would be a great way to crack through that ceiling and say, "Watch this show. It's important." And start to break those walls down.

Victor has Simon to go to for advice. Is there someone that you have in your life who is your Simon and what does that person mean to you?

Honestly, it's going to sound so corny, but my mother has always been that person for me.

She is! She's the smartest woman I know. She's kind. She gets angry at the right things. But never gives up. Always is fighting. I've been going to protests with her for time immemorial. I remember going with her to the No Nukes protest in Central Park when I was seven years old. She's civically minded. She's the person who can talk me off the ledge. She never stopped believing in me. She never told me to choose a different career when I wasn't getting jobs; when I was bartending and waitressing. She never let me give up on myself. She's my biggest and strongest supporter. I can't imagine my life without her. 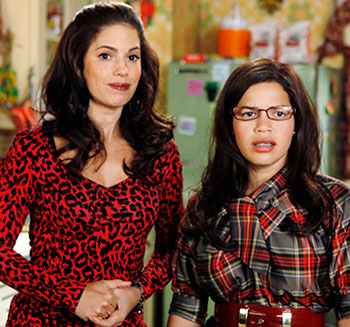 As you did in 'Ugly Betty,' you are once again playing the mother of a gay son in 'Love, Victor.' What does it mean to you to be playing a character such as that?

It has been life's joy and honor to play these women. Hilda on Betty and Isabel. They are polar opposites. Hilda accepted Justin and him being gay before he even knew he was gay. She would fight for him and she never let anyone talk smack about him. Whereas Isabel is the other side of that coin. She's very religious. It's not that she doesn't fully accept her son; she's terrified that he will go to hell or that he's a sinner and making a "choice" to live this life, when we know that it's not a choice.

To be able to go through her arc and that learning experience was so intense and crushing and also illuminating. It was this whole bag of emotions that I've gotten to play for the first time as an actress. Like I said, usually the moms that I play are super-accepting and wild. Isabel is much more conservative and straitlaced. But she's still a creative person. She's so layered. Both of these women were my absolute favorite characters to play.

W.C. Fields quote about never working with children. You've now worked quite a bit with children — would you agree with Fields?

[Laughs] I love W.C. Fields! My experience is that I love working with kids. The kids I have been blessed with on this show are some of the most talented. (They) are ones to watch. We will be seeing them for many years to come. They care so much about the work. There wasn't selfies and Instagram. They were really focused on the work. Half of them wouldn't even bring their phones to the set because they really wanted to focus. I was absolutely blown away by these kids!

Ugly Betty was the same thing with Mark Indelicato who played Justin my son. And he was only 10 or 11 when we started. He's now one of my closest friends in the entire world. I just hung out with him yesterday. Now, animals on the other hand...[laughs]. I think I'd have to be drunk like W.C. Fields to work with animals.