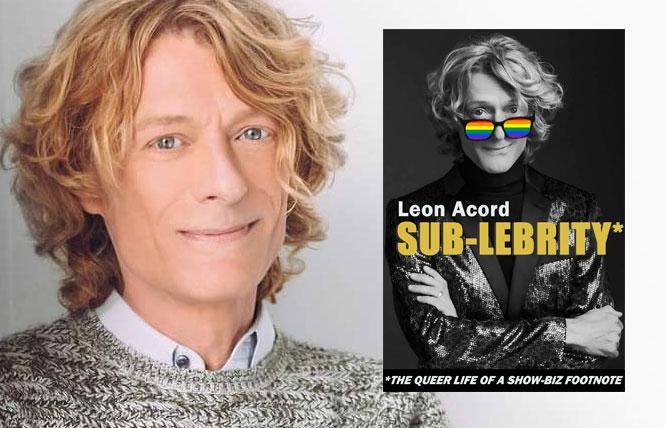 In his new book Sub-Lebrity: The Queer Life of a Show-Biz Footnote, actor and former San Franciscan Leon Acord, now a resident of Hollywood, chronicles his life as an openly gay theater actor and a performer in low budget independent film.

For years Acord worked steadily in Bay Area theatre and appeared in numerous films, some of which never got beyond the film festival circuit or were only released on the home video market. He always took his work seriously and gave his all. Acord epitomized the concept of the jobbing actor, one who gets up and goes to work, never getting the recognition he deserves.

Acord has had two brushes with fame. He's the writer/producer/director/star of Old Dogs & New Tricks, a popular gay web series about a group of middle-aged gay men navigating the dating scene in youth-oriented West Hollywood. And, a few years back, he got into a very public skirmish with the conservative, right wing, pro-Trump Susan Olsen (Cindy on The Brady Bunch).

In his book, Acord writes about these experiences with a refreshing candor. He also writes about his youth in Indiana, where he knew he was gay before he knew what being gay was. He remembers finding the sight of a shirtless William Shatner on Star Trek most exciting, even if he didn't yet understand where those feelings came from.

He also recalls his relationship with his parents. He and his father had somewhat of an adversarial relationship, though they obviously loved each other. Childhood friendships and first attempts at dating are also recalled, along with the realization that yes, he indeed was a homosexual, something he could neither deny nor hide. When he became an actor years later, he appeared primarily in gay theater (though there were occasional straight roles).

Acord shares his story with wit and good humor. It's a vividly written memoir, one which pulls the reader in and makes readers care about Acord and what happens to him. When he shares his memories of being bullied during his school years, readers will feel Acord's anger and hurt.

When he writes about close childhood friend Harry, who was also gay, and Erik, an early boyfriend, readers will care about those relationships. Acord and Erik remain good friends today, and you can't help but feel glad that their connection remains intact and was such a positive experience for them both. This is all a credit to Acord's fine and vivid writing, which pulls the reader in. 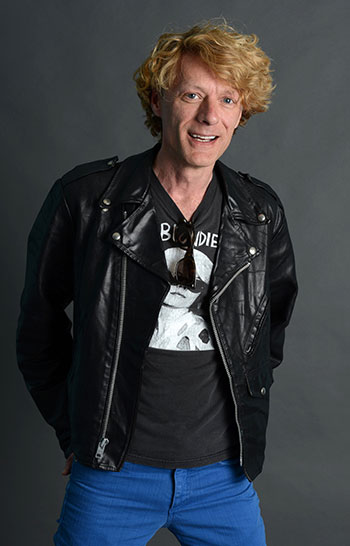 Acord spoke of the meaning behind the book's title.

"Sub-Lebrity came from when Old Dogs & New Tricks first debuted, there was a reviewer that liked the show but intimated that I was an egomaniac," he explains. "And I kind of sensed that he meant it as kind of shade, but since I was a no-lebrity, and I'm all about taking words like queer and fag and all the words that are meant as insults and taking the power from them. And I thought better a sub-lebrity than a no-lebrity, I've graduated, I've moved up."

Acord also shared that while he was writing the book, a voice in his head told him, "'Who the hell cares, you're a nobody, who's going to want to read a memoir by a non-famous actor!' So it also kind of ties into that."

Acord believes that being so out as a gay man might have held him back as an actor.

"Because of my generation," he said. "I'm about to turn 57. There's a reason a lot of the out gay actors now, the known names who are out of the closet, don't come out until they've achieved a certain level of success. God love them for having the bravery to do it at that point. My thing was, I could never fake it, I could never pretend, I couldn't work a party and pretend to be straight."
Erik, Acord's ex, has read the book, and loves it.

"He remains one of my best friends," Acord said. "We've had periods where we've fallen out of favor, but always reconnected. He was one of the first persons to buy the book and called me the day after he got it, having finished it overnight, and we had the most lovely conversation. He was really touched by it. We had just moved forward as friends and never really talked about the old days when we were boyfriends. He's a really nice friend, and it's nice to have a friend from that far back, someone who know where the bones are buried."

Acord admits that his parents haven't read the book yet. They're waiting for the paperback and don't read e-books.

"I was just talking to my niece, she designed the cover, and she said that my parents are excited about the book, but they're trying not to act too excited in case I'm disappointed," he said. "So I had to tell my niece to tell them I'm thrilled. I'm not doing this book to sell copies, I did it to do it, like anything. Tell them it's okay to be excited because I'm excited."

He added that it wasn't all that difficult to relive his past, such as the bullying he endured during his school days or the problems he had with his dad when he was young.

"I've made peace with both of those so long ago," he said. "It was easy to write about. It wasn't like yanking off scabs; the scabs have turned into scars and have faded into my skin at this point. The thing that gave me pause was writing about when (actor and playwright) Jeffrey Hartgraves got cancer, I thought it would be excruciatingly painful to live through it, but I found that it was the easiest part of the book to write, I think because it was still so kind of fresh and because it was painful it was right at my fingertips, it was immediate, it just came spilling out. I hope it honors him because that was certainly my intent."

Acord says that he hopes people walk away from the book entertained.

"I'd love for them to walk away with a sense that success is not defined by dollar signs or fame," he said. "Success really boils down to are you doing what you want to do and are you happy doing it. If you can say yes to both those questions, I would say that you're successful."

Judging by the stories that are shared in this book, Leon Acord is a very successful man. He may not be a big star, but for many years he toiled at his chosen profession, loving every second of it. And if Old Dogs & New Tricks is any indication, he has done good work. He has also found love, having been with his husband Laurence for decades.

Sub-Lebrity: The Queer Life of a Show-Biz Footnote is a superb memoir of a life well lived. The book is now available on Kindle and will be published in paperback on June 14.