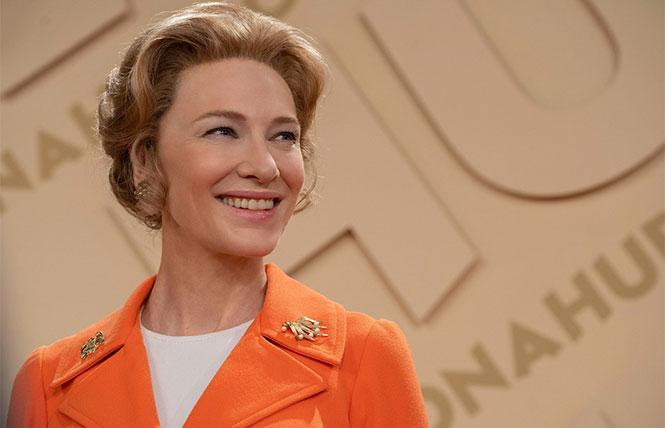 When Cate Blanchett told her mother she was going to portray Phyllis Schlafly, she replied, 'Why would you want to play someone like that?' And Cate said, 'Because you just asked me that question. I want to find out who she is.'

Cate fulfilled her promise by profiling the strengths and flaws of this conservative author/movement organizer, who led the fight against the Equal Rights Amendment (ERA), in FX/Hulu's sprawling nine-episode limited series, Mrs. America, now available for streaming. 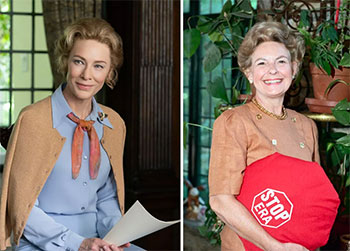 Cate Blanchett as Phyllis Schlafly, and Mrs. Schlafly herself

Created by former Mad Men writer Dahvi Waller, Mrs. America does for the optimistic, energetic '70s what Don Draper and company accomplished for the '60s, revealing how we inherited issues debated in these two pivotal decades.

Schlafly, the wife of an Illinois lawyer (Mad Men's John Slattery) and two-time unsuccessful Congressional candidate, is also a nuclear defense policy expert not taken seriously because she's a woman.

When her friend Alice MacCray (Sarah Paulson) worries that the ERA will subject women to the draft and denigrate housewives, Schlafly becomes its outspoken opponent and the godmother of the right wing culture wars with its tenets of anti-feminism, anti-abortion, anti-LGBTQ, and pro-family values, which continues to this day.

Prior to Schlafly, the ERA had bipartisan endorsement; even President Nixon supported it. In 1972, she founded the Eagle Forum, a reactionary political interest group, to prevent ten states still required from ratifying the ERA, battling the National Organization for Women (NOW) vying for its passage.
Avoiding caricature, Schlafly is presented as a charismatic, shrewd, anti-hero, her genius for grassroots organizing acknowledged. She spearheaded the religious conservative revolution, culminating in her backing the election of Ronald Reagan in 1980.

As if to underscore Schlafly's continued relevance, one episode observes her pinning a campaign button to her blouse: Let's Make America Great Again, '80 Reagan. Also almost as an afterthought, Schlafly is introduced to young Reagan staffers Roger Stone and Paul Manafort, who were later advisors to Donald Trump before being convicted and imprisoned. 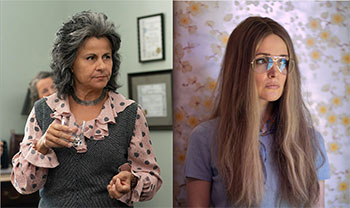 Adored and hated
One of the comical driving points of Mrs. America is that Schlafly, despite her claims to being just a devoted wife and mother of six children, is a feminist and according to Bella Abzug, 'the most liberated woman in America, but she doesn't know it."

Schlafly's brilliance was realizing women are not monolithic and recognized that feminism for many American women wasn't the solution to all their problems. She understood the vast potential of these women's discontent, who felt judged and marginalized by the 'libbers,' such she was able to mobilize an army of housewives and traditional church groups, 'happy homemakers' who baked their own bread loaves, delivered to representatives enticing them to support their causes.

To Mrs. America's credit, the liberated feminists aren't presented as paragons. Their contradictions are noted, especially underestimating Schlafly's threat, their infighting, and inability to agree on priorities and strategies. Friedan resented the influence and popularity of second-wave feminists like the attractive, idealistic Gloria Steinem.

Steinhem emerges as a clever opportunist, not above abandoning support of presidential candidate/friend Chisholm for George McGovern to gain political advantage. Abzug was domineering, currying the power of men, and not hesitant to fire disloyal/disagreeing women.

Collectively they were ambivalent in their support of lesbian rights depending on how the political winds were blowing. Betty Friedan was homophobic, believing lesbians were a distraction and unpalatable vis-a-vis feminist acceptance in mainstream America. Ms. co-founder Brenda Feigen's bisexuality was seen as a liability. On the right, Schlafly, despite public revulsion towards lesbians, reluctantly accepted her son's homosexuality, only asking for discretion in his affairs.

One of the outstanding features of this thrilling, addictive series is how it shows two issues —racism and sexism— that overlapped both movements. On the left, women of color were tokens, showcased as inclusive figureheads especially to the media, with Steinem rejecting an openly black lesbian editor's article on racial discrimination in the workplace. 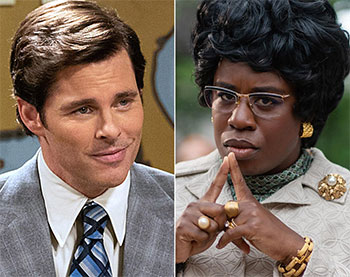 Both sides were plagued by sexual harassing/predatory men, overlooking them as the price for accumulating power, which due to #MeToo Movement consciousness, will make contemporary audiences shudder during scenes of men inappropriately touching women or making scathing sexual remarks. A new era, there were no rulebooks, as women were learning how to lead, trying but not always successfully to avoid male mistakes. Men resented smart, more knowledgeable women.

All the A-list acting is sublime. It's obvious the project was a labor of love, even when Mrs. America occasionally sacrifices depth to cover the breadth of the period.

The ERA formally ended in 1982, failing by three states to be ratified, though support for it has been recently revived. The women's liberation proponents continued to fight for gender equality but never again reached the towering political influence they amassed in the 1970s.

The backlash initiated by Schlafly, which led to the political realignment of liberals with Democrats and conservatives with Republicans, remains today.

It's no exaggeration to say there'd be no Trump without Phyllis Schlafly. The day after she died in 2016, her final book. The Conservative Case for Trump, was published.