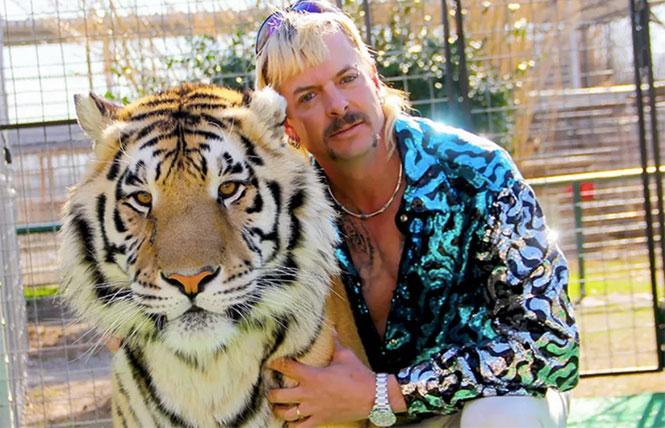 Netflix's Tiger King: Murder, Mayhem and Madness, is the hottest show in America right now, the most-watched Netflix series ever. We wish we could explain how this documentary series grabbed the country in its teeth and hung on, but you will just have to see for yourselves.

The true-crime documentary series delves into the life of Joe Exotic, a gay-as-can-be zookeeper with a predilection for the big cats who is surrounded by men, amputees and the aforementioned mayhem. Joe Exotic has hundreds of rare animals and nearly as many boyfriends.

Tiger King delves into Exotic's wild lifestyle and the world of big cat conservationists. Carole Baskin, owner of Big Cat Rescue, is a key player. She accuses Joe Exotic of abusing and exploiting the cats. That's where the murder part comes in.

On April 3, Joe Exotic answered questions in an interview, thanking his husband for standing by him, admitting shame on how his chimps were treated, and wishing he could experience some of the fame being generated by the series. Now Netflix has added an additional episode, according to Jeff Lowe, a zoo owner from the show.

Bonus: Saturday Night Live's resident lesbian icon, Kate McKinnon, is set to star in and executive produce a series in which she portrays Carole Baskin.

Would Tiger King be as captivating without a quarantine? We'll never know, will we? But it sure is amazing right now. So watch it, love it and stay tuned. 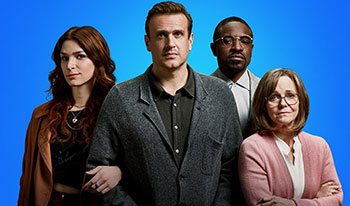 Saints, elsewhere
There is no more engaging nor nuanced drama on the tube right now than AMC's Dispatches from Elsewhere. This series could not be more perfect for the near-apocalypse in which we are currently living, as it suspends all reality while lifting you up with its magical realism and charming trans love story.

We adore this show, the four main characters, the actors playing those characters and the surrealistic take on our world that could not have predicted this time and yet is uniquely of it. It is just so good.

The series is based on the 2013 documentary film The Institute, reconstructing the story of the Jejune Institute, an alternate reality game set in San Francisco and created in 2008 by Oakland-based artist Jeff Hull.

AMC describes the series as "a group of ordinary people who stumble onto a puzzle hiding just behind the veil of everyday life. They will come to find that the mystery winds far deeper than they ever imagined."

Accurate, yet the series is so much more. Created by Jason Segel (How I Met Your Mother), this is a tour de force about how four displaced persons become involved in The Game, and how as they find each other, they find new meaning for their lives.

Too many details will spoil the enticement, so we won't. But the incipient love story between Segel's character, Peter, and Simone (the evanescent trans actress Eve Lindley, who deserves all the roles after this one) is enchanting. Lindley is positively luminous as the quirky art museum docent who chats with French painter Berthe Morisot and aches for something to happen in her life as she watches Law & Order: Special Victims Unit with her grandmother, who is her protector and mentor.

The always under-rated actress Sally Field is stellar as Janice, a woman with a gigantic secret who also has a deep void in her life. And Hip-Hop great Andre 3000, aka Andre Benjamin, is perfect as the conspiracy-theory driven Fredwynn.

Dispatches from Elsewhere is about trust, honor, love and a touch of madness. It lures the viewer in with compelling visuals and extraordinary acting. The thrum of queerness permeates every aspect of this series, although not everyone is queer. Mondays on AMC and On Demand. 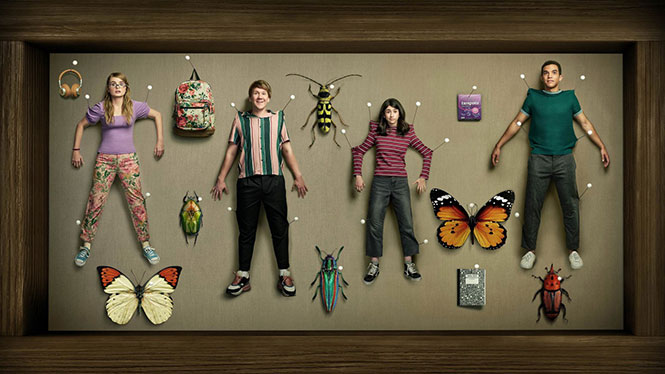 This is 'Everything'
Josh Thomas's (Please Like Me) queer familial comedy Everything's Gonna Be Okay, will leave you hopeful that there's a future beyond COVID-19, even if the series starts with dying.

This newly formed family is traversing their grief and loss as well as their tentative bonds. Their fierce fealty to each other and to their familial unit is compelling and poignant without ever devolving into schmaltzy sentimentality.

Nicholas's gayness is a given, as is Matilda's autism (Cromer herself is on the autism spectrum) and each big piece of who they are —as well as Genevieve's anger— informs how they interact and how Nicholas cares for the girls and himself.

All ten episodes are available now for streaming on Hulu and Freeform. 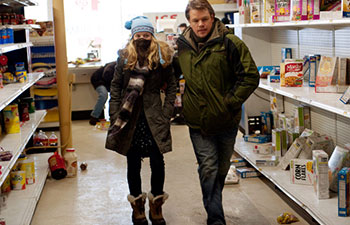 Anna Jacoby-Heron and Matt Damon fend for food in Contagion.

Gone viral
Gwyneth Paltrow says we should all be learning a new language or writing a book during our quarantine. If that advice from the woman selling "This Smells Like My Vagina" scented candles at $75 a pop at her Goop Shop annoys the heck out of you, you may find her role in the 2011 pandemic film Contagion satisfying.

Now available on Netflix, Contagion has a surprisingly calming effect that we can't quite explain. Something about everyone trying to stop the pandemic and find a cure is an antidote to President Trump saying "There's going to be a lot of death," as he did on April 4 in his daily press briefing. We highly recommend Contagion for COVID-19 viewing. It had lots of scientists working on it. More, alas, than on Trump's coronavirus task force.

Like everyone who is too anxious to read these days, we're settling for TV viewing as much as we can and crocheting a lot.

Streaming will be your bestie for the foreseeable future, so be sure to check out who is offering free stuff. On April 3, HBO began offering about 500 hours of programming for free (without ads) for a limited time. The list of free programming includes every episode of nine HBO series, nearly all of which have queer content: The Sopranos, Veep, Succession, Six Feet Under, The Wire, Ballers, Barry, Silicon Valley and True Blood.

We urge you to watch The Wire, one of the greatest TV series ever made. Six Feet Under and True Blood have extraordinary LGBTQ content and are also just really superb TV. Veep has queer content and is just such a good dark comedy.

Also streaming for free are ten HBO documentaries and docuseries including McMillion$ and The Case Against Adnan Syed.

None of HBO's recent mega-hits like Game of Thrones, Westworld, Big Little Lies, Euphoria and Chernobyl are available. Those you will have to pay for.