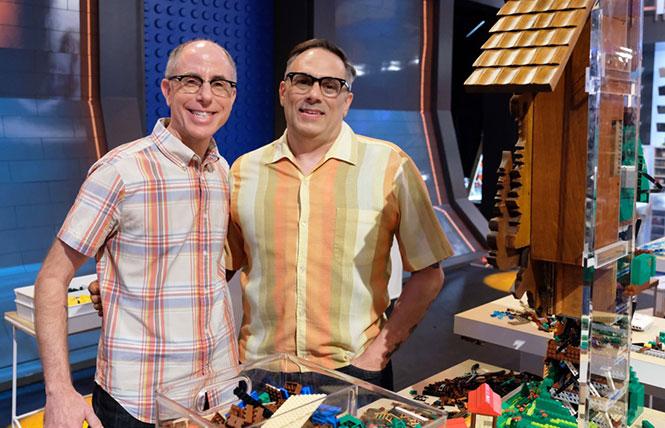 Oakland couple Richard Board and Flynn DeMarco's first bit of notoriety for their shared love of Legos came in 2018 when they wowed the crowd and judges at the annual Bricks by the Bay convention with their animated creation inspired by the dark amusement rides made famous by Disney imagineers. 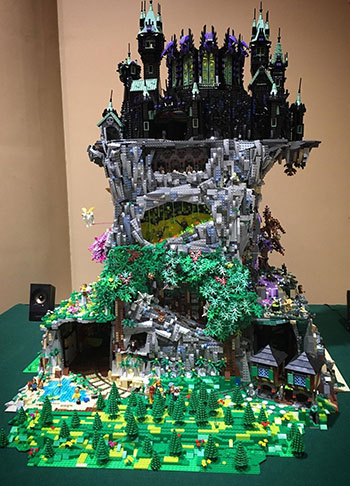 It featured a group of fantasy warriors trekking ever upward through a forest, cave, and other realms to battle a wicked enchantress. Their build, titled "Treasure of the Snake Queen," won raves from other Lego fanatics and earned them top honors for Best in Show, People's Choice, and Best Storytelling.

"We are big Disney fans," said DeMarco, 52, who just visited Disneyland in January with his husband, who gifted him the Lego version of the theme park's iconic castle for his 50th birthday.

At last year's confab for local Lego lovers, Board and DeMarco presented a sneak peek for a larger display, known as an MOC or My Own Creations in Lego-speak, called "Cycle of The Werewolf." It featured a forest scene with mystical creatures such as a tree being and fairies on a bridge crossing a stream.

On their Instagram account — https://www.instagram.com/trickybricks/ — they've continued to tease about their horror-themed build, with several posts about a haunted house cuckoo clock they are creating. It features a front door that opens to reveal a ghost as part of the first floor. 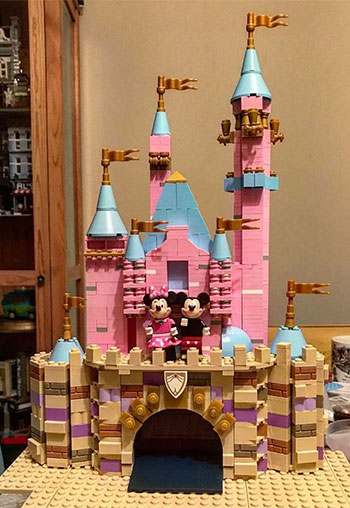 Talking by phone in early March to the Bay Area Reporter, the couple remained coy about the exact theme and design for their MOC entry into this year's Bricks by the Bay.

"We do have a secret project we are working on. It is mechanical and spooky," is all Board, 52, would disclose. He did add that the Instagram posts featuring the ghost "might have something to do with it."

(The 11th annual showcase for all things Lego is scheduled to take place July 9-12 at the Santa Clara Convention Center. The organizers posted a note to the event's website — https://www.bricksbythebay.com/en/ — saying they are "proceeding full speed ahead" at this time but closely monitoring the developments around the novel coronavirus outbreak that currently has the Bay Area and much of California sheltering in place.)


Competing on TV
The couple's fame has now jumped beyond the Lego fan base due to their being selected for the Fox competition show Lego Masters hosted by actor Will Arnett, the voice of Batman in the Lego movies. It premiered in February and features pairs of Lego builders — Board and DeMarco's team name was Married Thespians — competing each week to create a Lego MOC centered around a new theme every episode. The winning team will receive $100,000, a trophy, and the title of "Lego Master." 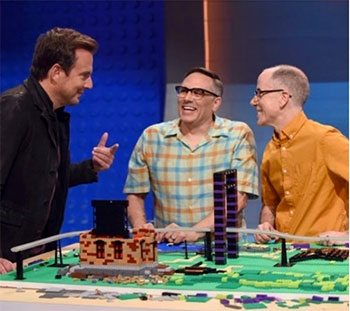 'Lego Masters' host Will Arnett with Flynn DeMarco and Richard Board

In the third episode, "Cut in Half," Board and DeMarco's clock creation won them top honors from the judges, two Lego employees. But they then struggled with their build in the sixth episode to land in the bottom and were voted out in the seventh episode that aired March 18. Titled "Storybook," it featured a bunch of kids who helped come up with the theme for the Lego builds the competitors had to design and then helped judge their creations.

"I was completely floored when we were selected for the show," said Board, who had never spent so much time with DeMarco as he did shooting the series for seven weeks last year. "The experience on the show with Flynn was wonderful."

They were the only gay couple cast, though another team featured Samuel Hatmaker, a member of the queer Radical Fairies group who lives in Los Angeles. The trio has become friends, as have all of the contestants, said Board and DeMarco, who appeared with the other teams at various Lego conventions earlier this year and hope to do so later this year.

"I just wanted to say while the focus of our time on Lego Masters was building and making art, I want to thank Fox and all the producers of the show for welcoming us as an out gay couple on the show and on national TV, and also for having Samuel Hatmaker on the show. They went to a lot of effort to present a diverse group of teams," said Board.

In addition to the support they have received from their friends and family as they watched the show, the couple has also been elated with the public's response and the platform the show has given them to showcase their artistic talents.

"Aside from the experience of being on TV and being more well known in the Lego community especially, I am so excited people are responding to our art in a positive way," said Board. "People seem to like what we have built and the way we are presenting ourselves on the show." 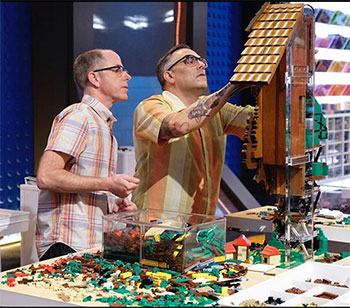 Richard Board and Flynn DeMarco race to finish a work on 'Lego Masters.'

Interesting experience
Watching themselves on TV, the couple acknowledged, was an interesting experience. They enjoyed how they were portrayed, even during one early episode where the pressure overwhelmed DeMarco and he broke down in tears to be consoled by Board, in what was a touching scene.

"I had a good time on the show," DeMarco said, adding that he suffers from anxiety and it took a while for him to adjust to the time pressure they were under on the show to come up with a design and execute it.

"We typically, for our larger sculptures, spend four to six months on something; we do highly detailed work. So being under pressure and having to redesign something three hours into that challenge after getting feedback from the judges; that stuff weighed down on me."

He joked that seeing it on TV didn't look as bad as he remembered feeling at the time. And showing his emotions so openly resulted in positive reactions from viewers.

"I have been approached by people who told me that was very helpful for them to see. I had a parent come up and say their son suffers from anxiety and it was really helpful to see that expressed on the show and have a positive outcome," said DeMarco. "It really was helpful for her son. I was really grateful that was the case and I helped someone without even knowing it." 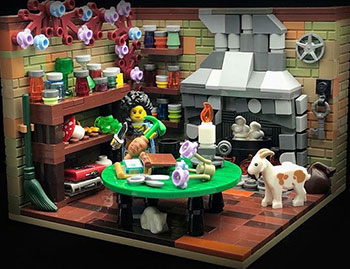 DeMarco, who is from Baltimore, and Board, who grew up in Huntington Beach, California first met 30 years ago in San Francisco through the theater world. Board does theatrical lighting and DeMarco, who now teaches kids engineering through Lego, also worked in the performing arts. They briefly dated, then broke up, moved to other states, and have remained friends.

The two then reconnected, fell in love, married nine years ago, and in 2012 moved into a small apartment in Oakland. Three years later they took up Lego building as a hobby that they could do together and it grew into a passion.

"As far as Lego building goes, we are total amateurs," said Board. "We don't do it for money."

They aren't sure exactly how many Lego bricks they own, with DeMarco saying he was "being very conservative" in estimating it was between 150,000 and a quarter million pieces. Their dining room, he said, is now basically their Lego room or studio. 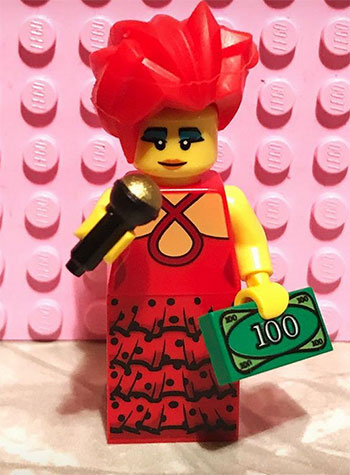 Board added that the couple tries "very hard to keep our Legos just to our Lego room. You wouldn't have to look hard to find at least a little Lego in every room of the house and in our car."

Most of the Lego structures they have on display are sets the company sells rather than their own designs, as they are constantly recycling pieces from one of their MOCs to another.

"The things we build, we take apart because we need the electronic components back to work on something else," explained DeMarco.

This September they hope to be able to travel to Denmark. They've been invited to show four or five of their Lego MOCs at the Masterpiece Gallery at the Lego House in Billund where the company is based.

"For us it is the biggest deal ... It is the Louvre of Lego," said DeMarco. "It is a once in a lifetime thing for sure."

Added Board, "We found out about it at home in bed in the morning; Flynn screamed so loud he scared the dog," an Australian Cattle Dog named Very Logan.

Should another Lego TV show opportunity come around, they wouldn't mind being cast again, considering how much they enjoyed being a part of Lego Masters.

"I definitely feel it brought us much closer together," said DeMarco. "We were always providing support for each other. But to go through something that intense with someone you've known a really long time, it creates a special type of bond."


To watch full episodes of "Lego Masters" and learn more about the cast, visit the show's website at https://www.fox.com/lego-masters/

A video of their award-winning MOC "Treasure of the Snake Queen" can be watched online at https://www.youtube.com/watch?v=Aq57iMONXV0