Was she Whitney's girlfriend? 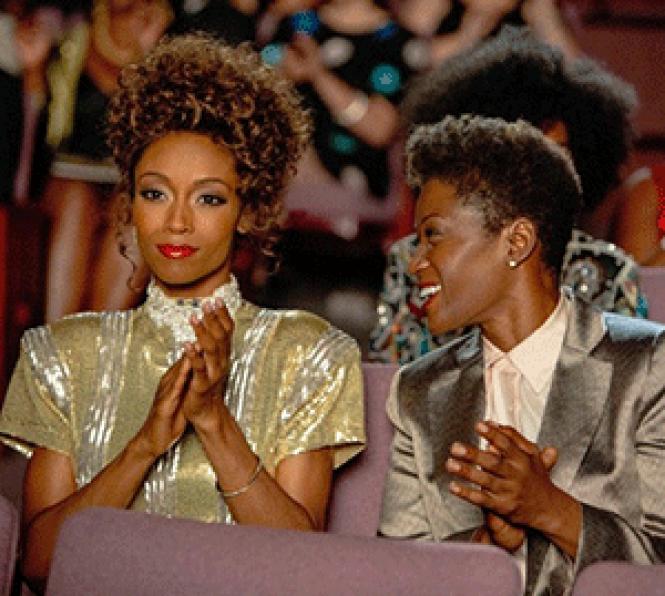 Actress Angela Bassett makes her debut as a director with Whitney, a biopic of the late music icon Whitney Houston. The film makes its debut on Lifetime on January 17.

Bassett, currently seen in the wildly popular FX series American Horror Story, is no stranger to the biopic genre. She became a star as a result of her acclaimed performance as the legendary Tina Turner in What's Love Got to Do With It? in 1993. Bassett has also portrayed Rosa Parks and Katherine Jackson, Michael Jackson's mother.

The Houston family isn't pleased with the new Lifetime film. They say the film, which focuses on Houston's troubled marriage to R&B superstar Bobbie Brown, was made by people who didn't know Houston or Brown. But Bassett might have more insight than the family realizes. She and Houston co-starred in the 1995 film Waiting to Exhale.

Yaya DaCosta gives a strong performance as Whitney Houston. Though she doesn't quite look like the singer,Â DaCosta effectively captures Houston's mannerisms and is quite convincing in conveying the emotional anguish that Houston lived with during her tumultuous marriage. Deborah Cox provides Houston's singing voice, and she sounds very close to the real thing with her stunning renditions of hits like "The Greatest Love" and "I'm Your Baby Tonight."

Yolanda Ross plays Robyn Crawford, Houston's lifelong best friend and personal assistant. Depending on whom you ask, Crawford and Houston were "more than friends." The film offers a few mild hints as to how close the two women were, but doesn't fully address the actual status of their relationship. Ross chatted with the B.A.R. about that question, and about how she approached the role.

David-Elijah Nahmod: Are you a Whitney Houston fan?

Yolanda Ross: Yes, I am, have been from the beginning. Whitney, to me, represents a beautiful brown-skinned woman who shared her gift with us and shined brightly without limitations. She touched people, and I feel the light she exudes is what people walked away with and were drawn to. That's special. I feel that as a fan and as a brown-skinned woman in the industry, I can only hope that my work and talents will be in the same way as hers. I want to touch people.

Describe who your character is.

Robyn Crawford was Whitney Houston's friend and assistant since they were teenagers. She was the person you had to go through to get to Whitney during their time of working together.

How did you prepare for the role?

I scoured the Internet for whatever I could find on Robyn. Though I had heard about her for years, I never knew what she looked like or sounded like. Even when we were shooting, there was so little to go on for distinct traits of her. So, just like with any other part, I took what was in front of me. I played each moment written as that character in whatever the situation was, and took whatever direction Angela gave me. I don't think you can go wrong if you are being true as your actions in the character.Â

Some people dispute whether or not Whitney ever had a relationship with a woman. What is your response to them?

Not knowing either one of them, knowing only hearsay, I don't think it would be a stretch at all if they were. Having someone you love and can trust is a hard thing to find for anyone, and to get to the level that Whitney was at, I'm sure much harder. I think they would have been lucky to have each other if that was the case, because their feelings seemed to be genuine for each other.

Ross toldÂ the B.A.R. that she's not had contact with Robyn Crawford, and that the Houston family was not speaking about the film. She hopes that people will keep an eye out for her other new film, Lila and Eve, with Viola Davis and Jennifer Lopez.

Whitney premieres on Lifetime on Jan. 17.