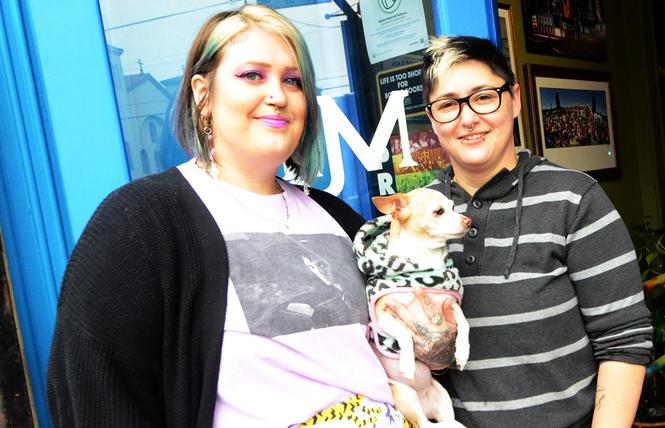 Fiancees Katey "Scoots" McKee, left, and Sharon Ratton, with their dog, Wednesday, stand outside at the entrance to their cafe, Milk SF. Photo: Rick Gerharter

For nearly two decades Steven Satyricon had worked at a local coffeehouse on the edge of San Francisco's LGBTQ Castro district until the COVID-19 pandemic forced it to close its doors in March 2020. He didn't work for 18 months, as even after the business reopened it did so with reduced staffing and didn't bring him back.

Then he happened to hear over the summer that the queer co-owners of the Milk SF cafe on Valencia Street at 14th Street were looking to hire on employees with experience in food service and the coffee sector. Queer himself, Satyricon started October 1 as its opening manager in the mornings.

"I am really happy. They encourage us to play around and come up with flavors," he said one recent November morning as he made one of his concoctions, a Nut Nog nitro coffee made with eggnog and a black walnut natural flavor extract.

Working there has reminded him of when he worked for a queer-owned cyber cafe back in Atlanta that also provided a safe gathering space for queer youth, as Milk SF has already attracted a loyal clientele among local LGBTQ young people. And unlike his last job, where he constantly felt his sexual orientation was seen as problematic when issues came up with customers, Satyricon feels completely embraced and supported by his new employers.

"This is a decidedly queer space that is actively courting a queer clientele. I feel free to be myself," said Satyricon, a well-known artist and performer most recently featured among the cast of Peaches Christ's "Terror Vault" Halloween show at the SF Mint. Working at Milk SF, he added, "feels expansive."

Fostering a business with a welcoming environment for LGBTQ people and straight allies of the community was a big driving force for why Katey "Scoots" McKee and Sharon Ratton sought to open Milk SF. Its following in the footsteps of its namesake, the late gay supervisor Harvey Milk, who in the 1970s organized the city's growing LGBTQ community into a potent political and economic bloc, particularly in the Castro where he lived and owned a camera shop that doubled as his campaign headquarters.

The cafe's name also plays up the various dairy options on offer, from cow's milk to oat milk, as the menu specifically caters to vegans and people who are gluten free.

Thus, the Milk SF name "is a cute hybrid," explained McKee, of the dual meanings behind it.

As soon as patrons walk in the door they will see a photo to their left featuring an oversized reproduction of the Milk U.S. stamp under the Rotunda of City Hall from when it was released in 2014. The walls are decorated with the works of various artists, including Bay Area Reporter photographer Gooch, whose portraits of various drag queens from Peaches Christ to Shangela and Bianca Del Rio are for sale. (An art show is being planned for 6 p.m. December 15 with ticket sales to benefit a local nonprofit.)

Just as the color blue paid a prominent role in Milk's political signage, so too does it on the facade of Milk SF. Located at 302 Valencia Street, it is next door to McKee's hair salon Glama-Rama! Opened in 1995 by Deena Davenport, McKee took over the business in December 2016.

As both retail spaces are part of the same Victorian building, which lost its facade in the 1906 earthquake, McKee was able to work out a deal with her landlord that made economic sense for opening a coffeehouse and café amid a global pandemic.

"It was a liquor store called Fred's that closed less than a decade ago," said McKee, who's 13-year-old Chihuahua Wednesday is often found in her wagon bed under the counter when at the cafe.

McKee and Ratton, both 38 and together for two years, soft opened the cafe August 6 and held their grand opening August 21. They also got engaged that day, though the couple is waiting to set a wedding date.

Working with the office of gay District 8 Supervisor Rafael Mandelman, they were able to take advantage of a newly instituted expedited permit process for local business owners. And as soon as they opened their doors, the LGBTQ Democratic political club named for Milk began holding its monthly meetings at Milk SF.

The neighborhood has also embraced them from day one, said McKee, who reopened the hair salon last fall in October and joked the business never prompted such an outpouring of support as the cafe has received.

"They love us. We have gotten bottles of wine and love letters," said McKee, chalking up the response to the fact that "this city loves food."

Milk SF carries a selection of Dynamo Donuts ($4 each) on Fridays and also serves another beloved, locally based food item, Boichik Bagels ($7.50 for one made with egg salad; $8 for a tuna melt bagel). It features beans from Highwire Coffee Roasters in Oakland ($3.25 for a 12 ounce hot coffee; $3.80 for 16 ounces) and makes its nitro lattes infused with nitrogen gas ($5 for 16 oz.; $6 for 20 oz.) with a batch brewer it rents from Ground Control in Oakland.

It is looking to expand its food offerings, particularly during lunch and evenings, but has to be creative in what it serves since the cafe has a limited food permit. It isn't able to cook on a stove or with a deep fryer.

"We are planning on offering something special, not just bagels and coffee," said McKee, such as having a charcuterie plate and other light snacks.

As part of its permitting it is required to have a retail section, and McKee and Ratton have stocked it with items from various businesses run by queer, female, and people of color owners. It is a great option to find unique holiday gifts this year, with the selection running the gamut from mugs featuring pop culture icons like singers Dolly Parton and Lil Nas X ($18.95) to jewelry by Golden Hour and Spotlight ($16-$44 depending on the item).

"I am impressed with people wanting to buy what we are selling," said McKee, who hopes to organize an event for local queer makers and artisans to show off their goods.

One revenue stream McKee and Ratton are eager to increase is renting out the cafe for private events, especially with the busy holiday party season coming up. (As of now customers must wear masks when not eating or drinking under the city's COVID rules for eateries.) They offer a sliding scale for LGBTQ event planners and nonprofits, with capacity for upward of 40 people in the space plus the ability to also use the adjacent hair salon.

(A set of rainbow-colored steps by the cafe's register leads up to a second-floor balcony space, but it's unavailable for public use because the height of the ceiling isn't up to today's zoning standards.)

They are also presenting their own events, with a monthly poetry reading night dubbed "Queer Bedtime Stories" and a drag brunch "Hi, Femme!" moving to the last Sunday of the month. A queer comedy show is also in the works, and an updated calendar of events will be posted to the cafe's website once the new schedule is ironed out.

McKee and Ratton are looking at obtaining a beer and wine license next year to offer adult beverages, especially during the events. But they do not want to become a de facto bar.

"We can do a happy hour and it pairs well with a lot of our events," said McKee. "We will maintain being all ages but we want to have the option to add champagne to our brunch menu or wine at night."

Ratton, who also works as a metalsmith, added, "We don't want to be a destination to get a drink, but if you want a drink with a show then absolutely."

To learn more about Milk SF, visit its website.

Correction
Last month's column erred in the address for Michael's Chocolates. It is located at 3352 Grand Avenue in Oakland's Grand Lake district. The online version has been corrected.